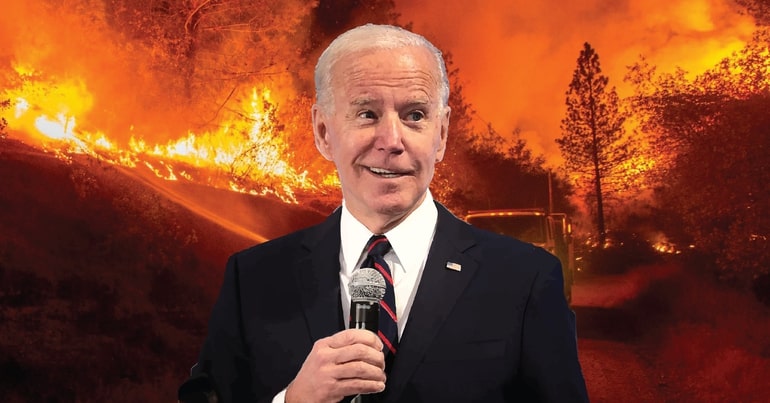 Most people reading this can probably agree that Donald Trump being out of power is an optimal situation. I imagine many enjoyed seeing him lose, too – the protracted vote count making it like watching a hideous slug being salted one grain at a time.

Of course, Trump being the worse candidate doesn’t make Joe Biden a good one. The president-elect is a veteran of a Democratic establishment that exists largely to defend the status quo on behalf of its wealthy donors. This could be a problem for Biden, because like it or not, the times they are a-changin’.

The question is how the hell does a status quo politician govern when the world is collapsing?

A cavalcade of crises

So yeah – America has more problems than you could shake a bald eagle at.

Going off what we know about Biden, will the new president have answers?

The biggest issue facing humanity is the self-perpetuated destruction of the planet we all live on. Biden has made promises to tackle the climate crisis, one being that he’ll sign America back up to the Paris Agreement. That’s preferable to the alternative, but bear in mind that in 2019, AP reported:

[UN secretary-general Antonio Guterres] lauded the Paris climate accord, but said even if its promises are fully met, the world still faces what he described as a catastrophic three-degree temperature rise by the end of the century.

And that’s if we implement the measures – something countries are already failing to do.

Biden does have a plan to tackle climate change, but there are a few problems:

Failure to get on top of the climate issue will cause problems for him. In 2024, few will believe his new climate plan if he’s made zero ground on the first one. Many Republican voters might not care, but those who desire an environment/future will.

If that happens – and people believe the worst case climate scenarios – why vote at all? It’s this fear of voter apathy that may force movement on the issue.

Can we expect Biden to deviate from the status quo elsewhere?

Biden has referenced ending “shareholder-driven” capitalism, which would basically mean ending the system of corporations primarily answering to shareholders. The replacement to this would be “stakeholder capitalism”, in which businesses are equally as responsible to workers and customers.

Is he likely to shake things up like this? Given that capitalism is failing and people are noticing that, the status quo is becoming increasingly unmanageable. The question is whether Biden will rock the boat given that he sailed into power on a wave of billionaire donations. This is especially pertinent given that – surprise, surprise – replacing shareholder capitalism is already drawing criticism from Wall Street.

It’s also worth noting that a more equitable form of capitalism is still capitalism – a parasitic system that many argue is incompatible with fighting climate change.

At some point in the next four years, the police will figuratively lynch another Black person and people will take to the streets. When that happens, Biden will have to respond. Unlike Trump, he can’t afford to ignore or belittle these people and their pain. The question is if he responds like a human being or like someone with the political record of Joe Biden.

Biden has plans to “build on” Obamacare – a mess of a system that improved on the previous mess but still benefits a vampiric insurance industry at the expense of patients/decency. What you may not realise is that ‘Medicare for All’ – a proposed national health service – is the preferred option of 69% of voters. On election night, Fox News ran an exit poll that actually found 72% of people support a “government-run health care plan”.

The US health care system isn’t just unpopular; it’s also the cause of two thirds of bankruptcies. Will Biden be able to maintain this obscene, life-ruining injustice-machine?

Only if nobody gets seriously ill in the next few years.

Donald Trump has left a pretty low bar on the coronavirus front, but that won’t stop the right-wing press criticising any move Biden makes. This will prove especially true if a sizeable majority decides to flout safety measures. It’s worth remembering, though, that ‘business as usual’ responses don’t exist in a once-in-a-century pandemic. The question is if he makes moves that benefit the people or the power.

The rise of the far right and a divided nation both have the same solution – Biden has to make people’s lives better. It won’t be a quick fix, but it could stop the problem getting worse – the problem ‘not getting worse’ representing a big improvement on America’s current status quo.

There are deeper issues that won’t be fixed by class politics alone, of course, but Biden may not be the best person to end – or even oppose – the American colonial project.

There is no doubt that Biden is a status quo politician. There is reason to believe his inclinations in that regard can’t survive the next four years.

Whether the establishment likes it or not, there’s a great wave of change coming. Either Biden’s timidity will get swept away by it or he will, but there’s no avoiding it – there’s no standing still. The 46th president will be remembered as a reluctant agent of change or he won’t be remembered at all. Possibly because he ends up being a footnote between Trump and the competent despot who comes next; or possibly because there’s no one left to remember him.

You’re welcome to find this sort of talk dramatic, of course, but I’d advise you remember this moment. Much like with Biden, I imagine these next four years are going to change how we all feel about a lot of things.