The far right threatened US democracy but nothing is going to change. Here's why. - Canary 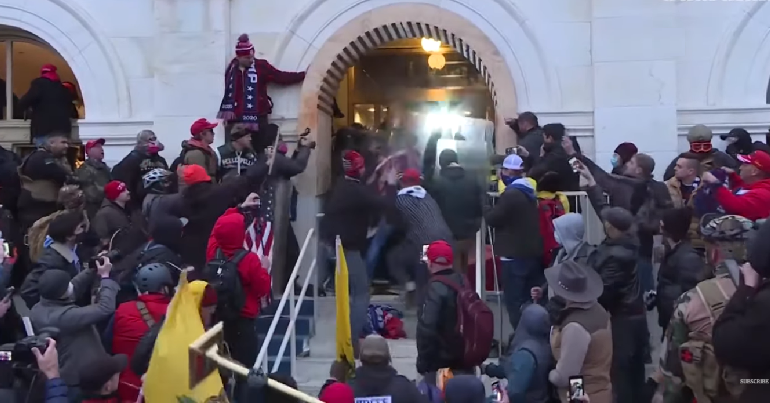 It’s been a chaotic couple of days. On Wednesday 6 January, violent mobs of Trump supporters descended on the Capitol Building in Washington, D.C. The Proud Boys, QAnon and neo-Nazi groups were among those present, showing the resonance Trump has with the far right. And fears have now emerged that some rioters were even planning on taking hostages.

The opposite of democracy

Comparable to the Houses of Parliament, the Capitol is where US Congress and Senate meets and operates from. The US Senate website describes it as “The most recognized symbol of democratic government in the world”. So yes, these riots are a Very Big Deal. But make no mistake – this was no revolution.

The riots were not about the will of the people, but a fascistic attempt to crush and override the people’s will. The riots were not about free speech or liberal democracy, but very much about the subversion of democracy. They were about violent bullies refusing to accept the outcome of a democratically held election. They were about white supremacists using force to try and keep in power a leader who they see as being the most aligned with their interests. This is not only the opposite of democracy, but a clear and present threat to it.

This threat, however, contrary to what the commentariat on both sides of the pond might suggest, isn’t new. For years now, the left has been warning of the dangers of platforming far-right views – of giving these views oxygen and legitimacy and allowing them to spread. Our calls were ignored.

Nigel Farage has repeatedly appeared on the BBC and other mainstream media, even when he held no position in either the British or EU parliament. In August 2019, the BBC interviewed Trump’s former chief strategist Steve Bannon. Another interview, from May 2018, is available on the BBC News YouTube channel. Steven Yaxley-Lennon, aka Tommy Robinson, has similarly made frequent appearances on British primetime TV. While in October 2018, the Guardian published a puff-piece about another former Trump adviser and border wall enthusiast, Ann Coulter.

So, at least on this side of the pond, the far right has had a lot of air time. But now, when the arbiter of democracy itself has had democracy threatened at the very centre of its power, will things change? Will anyone start paying attention? The meme goes something like this:

– Can the far right be trusted to respect democracy?

– So should far right voices be platformed alongside other political views?

– Ok, so will mainstream media stop platforming them?

The system is working exactly as it was designed to work

No more inviting ‘eccentric’ far right people on TV shows in the name of balance or onto podcasts in the name of rankings. Free speech can’t come without responsibility.

But what this take misses is that the riots, the thriving of the far right, and their platforming on mainstream media are all cogs in the same machine. The system is working exactly as it was designed to work.

Airing far right views hasn’t happened by accident or as a series of short-sighted mistakes. The man telling the violent far right mob he loves them is the same man this government calls its ally. This is also the same government the entire British mainstream media helped get into power – which is the same mainstream media that will keep platforming the far right, despite recent events.

Why? Because nationalist politics keeps the right in power. It’s therefore hard to argue how consistently platforming the far right, thus shifting the window of acceptable discourse evermore to the right, isn’t deliberate. This isn’t a bug in the establishment, but a feature. As long as the anti-capitalist, people-centred politics of the left is suppressed, all is as it should be.

So despite the far right threatening democracy in the US, things are unlikely to change. We can’t expect reform in establishment media because it exists to uphold the status quo. And that’s why independent media is so important. Outlets that challenge the establishment’s narrative and dare to threaten its power are needed now more than ever.