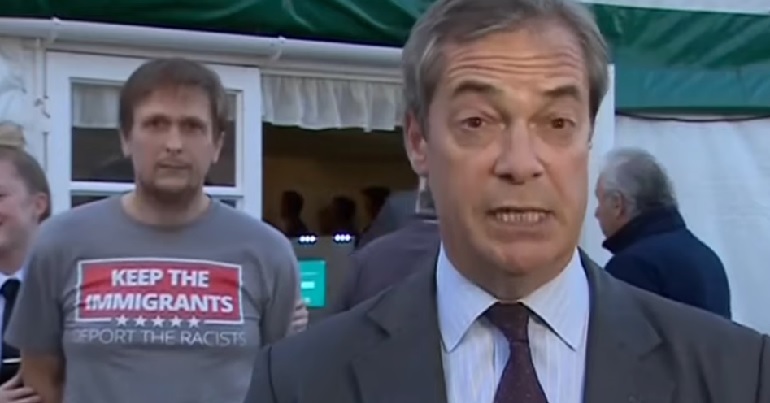 The mainstream media is no stranger to giving airtime to right wing views. But on 12 September, it surpassed itself.

In the wake of the news of Yellowhammer and Scottish courts finding Boris Johnson’s suspension of parliament unlawful, both the BBC and ITV decided to host far-right politician Nigel Farage:

Today @joannaccherry made history by proving in court that Johnson is the first ever PM to have lied to the monarch. So who do people decide to interview about it this evening?@Peston: Nigel Farage@afneil: Nigel Farage.

Shows exactly why our country has gone down the toilet.

People expressed their frustration over Farage’s media appearances on Twitter:

WHY is this utter Tosspot on our TV?
He is not an MP, he is an unelected leader of a Company, not a political party.
He is divisive, he is a liar, he is a thief, he is a fraud.

Why do journalists give him the time of day to spread his hatred.
He is a vile man. https://t.co/pU2cdip8Ws

Some also pointed out the danger in giving someone like Farage, who has a track record of racism, a platform:

Maybe a racist who has to beg the PM for a pact by taking out an ad in the daily express doesn’t deserve this kind of platform?

Robert Peston, in particular, was criticised for not challenging Farage’s views. However, plenty of people online did a better job of scrutinising his words:

No grip on reality. Just bombastic, spluttering denial in the face of hard truth assessed by impartial civil servants. What does Farage do next if he gets his way on no-deal and #Yellowhammer all comes true? #Peston https://t.co/xGCABfJN1A

Allowing Nigel Farage the last word to dismiss and disparage the word of industry experts based on nothing but his own bullshit laden self interest is an incredibly stupid thing to do.

Farage wants a group of sovereign states working and trading closely together. That already exists. It's called the European Union.

As inevitable as death, Nigel Farage pops up on #Peston to say contingency scenarios published today are “Projecf Fear Mark 2” and “should be utterly, completely disregarded”. Based on what? His business background in the 80s.

He is a vandal. There’s no shorter word for it. ~AA

Andrew Neil is a disgrace inviting one racist and a hard brexiter member of government when we had the decision in the courts in Scotland today.

Farage contributed to the show from a Brexit party conference in the Northern town of Sedgefield. However, a special appearance improved his segment dramatically. A protester wearing a t-shirt that said “Keep the immigrants; deport the racists” appeared behind Farage on live TV:

The timing was perfect, too, as he appeared just when Farage claimed, “I don’t think Westminster even understands how people in constituencies like… Sedgefield feel about politics”:

@MaryCreaghMP @WendyGeorginaL2
Nigel Farage was in Sedgefield tonight. As he told the BBC’s Andrew Neil, “Westminster doesn’t understand how people in Sedgefield feel,” one voter made his feelings very clear…. pic.twitter.com/tBGaccy1Eo

Joking aside, it’s important to recognise the very harmful impact of giving Farage media exposure. Such publicity has been linked to a rise in his popularity, and therefore in people agreeing with his views:

Mainstream media outlets have shown time and again the right-wing bias in their reporting. However, the consequences of giving voices from the far right repeated exposure on mainstream media are grave. The media might be doing its best to ignore the concerns of working class and marginalised groups but people are showing they aren’t fooled by this manipulation.