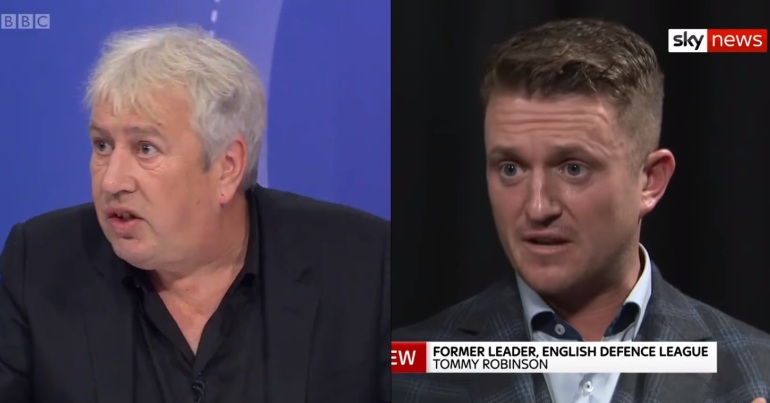 Last night was an epic fail for mainstream British media, and it highlighted more than ever why movements like #ChangeTheMedia are needed. The BBC decided to put hate-spewing Rod Liddle on Question Time, and Sky News interviewed far-right leader Stephen Yaxley-Lennon (Tommy Robinson).

Liddle, currently associate editor at the Spectator, has previously been accused of misogyny and racism. Yaxley-Lennon, meanwhile, was sent to prison for allegedly endangering a trial involving paedophilia. Their TV appearances coinciding on British TV has not gone unnoticed:

The two men were given airtime on mainstream TV on the same day a square was named after MP Jo Cox in Brussels:

Today, a street in Brussels was named after Jo Cox.
Meanwhile, in Britain, Tommy Robinson is interviewed by Sky News and Rod Liddle appears on #bbcqt.

QT seem obsessed with giving legitimacy to far right racists like Liddle. They only exist to poison the debate and cause division . There's just been a memorial to Jo Cox and the BBC seem to have forgotten what's at stake. This needs to stop.

On the one hand, defenders of free speech suggest we need to ‘hear out’ the likes of Yaxley-Lennon. But others argue that airing hateful views is little more than a marketing ploy:

It seems neither Sky nor the BBC understand the implications:

People who think or argue that Nick Griffin going on Question Time killed the BNP ?

Either this is a massive self-own and you’re saying that Sky News’ audience couldn’t possibly amplify Tommy Robinson’s audience of 1 million Facebook followers or you fundamentally don’t understand how any of this works. https://t.co/Wn7ICeSBQd

People have expressed the need to question the mainstream media, and disengage from increasingly ridiculous programmes like Question Time altogether:

Turn it off. Our establishment media is willing to platform literal fascists on prime time, but throw their toys out of the pram if a leftie gets 5mins to make a point anywhere in our media landscape. https://t.co/TOm8niCTk1

Did you see the fascist with a swastika tattoo on BBC London news? Unchallenged when he said 'it's not racism' https://t.co/ImojAkXg8E

Although seeing Labour MP Ian Lavery say “I’m not your mate” to Liddle was definitely fun:

God, it’s so refreshing to see @IanLaveryMP cut through the faux chumminess of media norms and properly take on a liar and a racist like Rod Liddle.

When will the mainstream media learn? And for how long will it relegate the left to the margins, while putting far-right views like Yaxley-Lennon’s centre-stage?

If Jo Cox’s death has taught us one thing, surely it would be that hateful views do not deserve a platform in British media.