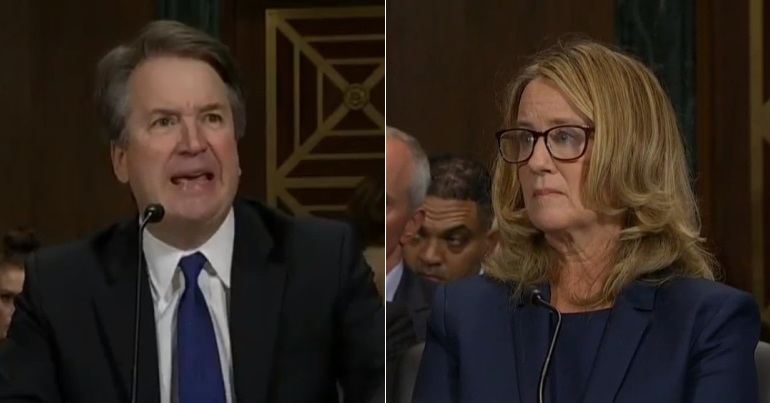 Dr Christine Blasey Ford, who was the first to come forward and accuse Kavanaugh of sexual assault, was among those who testified. The hearing will be followed by a vote to decide whether Kavanaugh is appointed as a judge in the US Supreme Court.

The proceedings have demonstrated to many people the misogyny that is rife within the US government:

Watching male senators apologize to a man because women accused him of assault is a special kind of useless fury.

If you ever wondered how men could go around accusing women of being witches before drowning them then all you have to do is pay attention to the men who are in control of the United States government.#KavanaughHearings

Though her voice quivered as she recounted the alleged assault that “drastically altered [her] life,” Dr. Christine Blasey Ford stayed strong as she publicly told her story out loud for the first time. pic.twitter.com/5vAUsi8sEp

Conversely, Kavanaugh expressed outrage and indignation, despite being able to offer little proof of his innocence.

Kavanaugh’s supporters, meanwhile, appeared angrier at the damage to his reputation than they did at the possibility of assault:

Every American NEEDS to see this!@LindseyGrahamSC was a WARRIOR for truth today!

Although a decision is pending on Kavanaugh’s appointment, the hearing appears to have made a significant impact. During the hearing, Kavanaugh was questioned repeatedly about the possibility of an FBI investigation:

I questioned Judge Kavanaugh, repeatedly, on whether he would ask for an impartial FBI investigation into the allegations against him. He declined.

The American Bar Association, meanwhile, has called to delay the proceedings until the FBI has investigated the allegations against Kavanaugh:

NEW: The American Bar Association calls on Senate Judiciary Committee to halt Kavanaugh proceedings until after the FBI completes a probe of the sexual assault allegations, effectively siding with Democrats. https://t.co/auHhznj8FY

Kavanaugh’s reaction to the allegations has not gone unnoticed:

Kavanaugh acted like a petulant spoiled entitled child all day… prep school white boy who thinks shit is owed to him. If Dr Ford had acted like that the reaction would have been akin to a crucifixion. But white affluent preppies gonna do what they do…

“But I went to Yale Law School.”
“But I was on the varsity basketball team”
“But I go to Church on Sundays.”
“But I am a white Republican male.”

No Brett Kavanaugh. You are an accused sexual predator who does not belong on the Supreme Court of the United States. pic.twitter.com/R0vtPw1drp

Kavanaugh has never lain awake at night wondering, 'Do I deserve the power and prestige of my position?' No, he accepts it as his birthright.

Today was what happened when women challenged that idea. https://t.co/JUZR63Om9p

Many have recalled the experience of Anita Hill, who similarly testified against then-Supreme Court nominee Clarence Thomas. Despite Hill’s testimony, judge Thomas was still appointed to the Supreme Court in 1991:

The allegations against Brett Kavanaugh make us remember the bravery of Anita Hill, one of the 1st women to speak up about sexual harassment&assault. Thank you for standing up & being a hero fighting for intersectional justice. #webelievesurvivors
RT @ pic.twitter.com/8Ot0IUMkeg

For those of us who remember the barely leashed rage – absolute rage – of Clarence Thomas, this is very familiar. And I remember how unsettling it was and how much it shifted the dynamic away from Anita Hill’s powerful and persuasive testimony.

Anita Hill because she is a Black woman did not have the luxury of vulnerability before the all white male Senate Judiciary Committee in 1991.

I was 14 when Professor Anita Hill testified.
I am 41 — and a professor myself — as Professor Christine Blasey Ford speaks.
My eldest doppleganger niece is 14.
It has to be different this time. Just has to be. #tears

For many women, seeing the entire ordeal unfold has been traumatising. After #MeToo and #TimesUp, people are emphasising how important it is to #BelieveSurvivors:

Dr. Ford is not on trial. She is sitting here because she has the courage to come forward and because it was her “civic duty.” I believe her.

I went to high school and college with lots of Brett Kavanaughs. Rich, ambitious, smart party boys. When they're confronted with anything they've done wrong, they unravel. They cite their own accomplishments. They cry. I know this because I've dated them. It all came back.

1) In all seriousness, let me say this. I feel for Dr Ford, I have experienced sexual assault. But nothing today has been as triggering for me as the rage and entitlement in this man. I had an angry, alcoholic father. He had an inside face and an outside face. pic.twitter.com/FkycM451al

I was 16. I reported. I’ll never forget the male officer standing beside my hospital bed asking me if I really wanted to ruin the lives of two young men for one bad decision. I think I need a break from twitter. #BelieveSurvivors

Whatever the final verdict, Kavanaugh’s hearing is a moment in history that could forever change the way we perceive victims of sexual assault. Maybe – for rich, entitled men in power who prey on women with impunity – time is finally up.