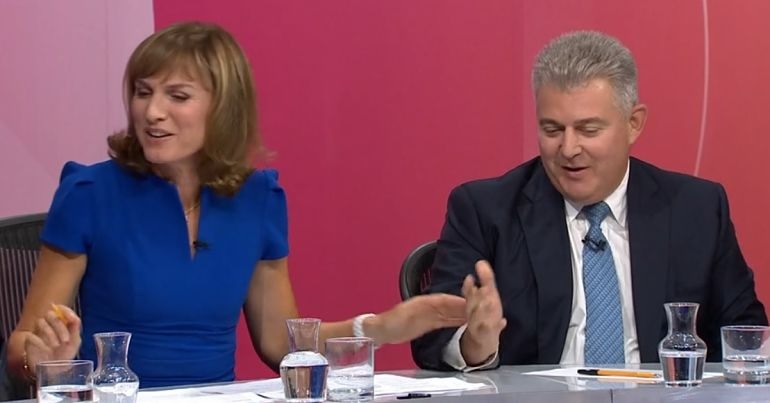 During BBC Question Time on 12 September, host Fiona Bruce’s mask slipped for one revealing moment. The public broadcaster makes much of its commitment to “due impartiality” in its output. But one brief exchange between Bruce and Home Office minister Brandon Lewis on the programme has got people up in arms. Because many saw the playful “teasing” in it as an anathema to the adversarial relationship the media should have with those in power.

As per usual, Brexit featured heavily as a topic on Question Time. One question in the programme, however, focused less on the current government’s handling of the issue and more on the PM who started the debacle: David Cameron:

Here's our next question from the audience. #bbcqt pic.twitter.com/3uEKDoHmNg

That led audience members to share their thoughts on Cameron, who promised an EU referendum in 2013 and delivered it in 2016.

One woman brought up the fact that Cameron – who campaigned to remain – pledged to stay in his post no matter what the outcome of the vote. Following her comment, Bruce asked Lewis whether he wished Cameron had stood by that pledge:

So, a difficult question was asked to Brandon Lewis about David Cameron. Fiona Bruce noticed Lewis was struggling so patted him on the arm and said, “I’m just teasing you”. Unbelievable. #BBCQT pic.twitter.com/WMky07lT9A

But as Liam Lavery pointed out, Bruce then stopped the “struggling” Lewis in his tracks as he tried to answer the question. As she did so, she patted him on the arm, smiled, and said, “I’m teasing you, I’m teasing you”. Lavery wasn’t the only viewer who was taken aback by the exchange either:

WTF is going on?!!! The charge, Fiona Bruce, isn’t there to “tease” the panel members. She is there to get answers on behalf of the public! She is totally the wrong host for @bbcquestiontime #bbcqt https://t.co/2hln5oFsrF

@bbcquestiontime #bbcqt Fiona Bruce pats former Tory chair on the arm and saves him from an awkward question by saying "I'm teasing you I'm teasing you. "
Cutting edge their Fiona. Her bias towards the Conservatives is palpable.

When @BrandonLewis, @theresa_may's Tory Party Chairman and a minister under @David_Cameron, struggles with a question, @bbcquestiontime's less than impartial host Fiona Bruce reassuringly lets him off the hook: 'I'm teasing you, I'm teasing you…'#bbcqtpic.twitter.com/41S8nuU2OS

Although it was a fleeting moment in the show, it speaks volumes. Because it demonstrated a lighthearted, good-natured playfulness between the BBC host and her Conservative minister panellist. A whimsicality which is generally missing from Bruce’s interaction with Labour shadow ministers. And it’s a chumminess that certainly isn’t conducive to the adversarial relationship journalists should have with those who wield political power.