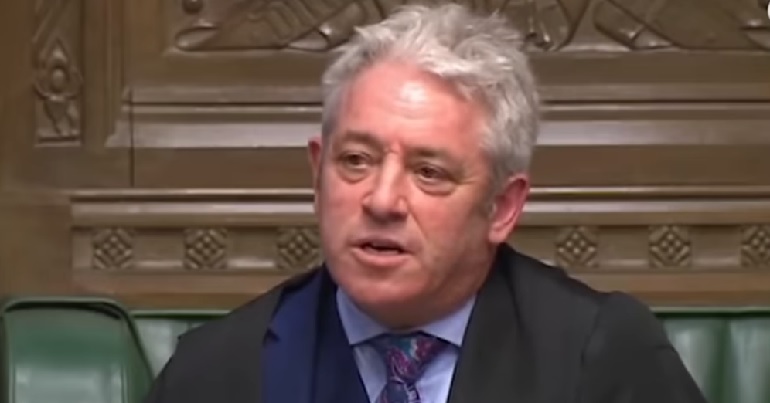 During a lecture in London, former House of Commons speaker John Bercow said he will do everything in this power to stop PM Boris Johnson from breaking the law. Bercow said he was prepared to use “procedural creativity” to ensure the PM doesn’t illegally try to push through a no-deal Brexit.

If we come close to [Johnson ignoring the law], I would imagine parliament would want to cut off that possibility … Neither the limitations of the existing rulebook or ticking of the clock will stop it doing so. … The only form of Brexit that we have, whenever that might be, will be a Brexit that the House of Commons has explicitly endorsed.

Moreover, Bercow strongly condemned any attempts by advocates of Brexit to break the law.

In 2019, in modern Britain, in a parliamentary democracy, we parliamentarians, legislators, cannot in all conscience be conducting a debate as to whether adherence to the law is or is not required.

He went on to say that such attempts “would be the most terrible example to set” for society at large.

Bercow is standing down from his position as speaker after 10 years. In his address, he said that Brexit had exposed flaws in Britain’s political system. And he suggested the need to explore options for a written constitution in the UK.

Scottish judges recently ruled that Boris Johnson’s suspension of parliament in the lead up to Brexit is unlawful. The ruling concluded that the real reason for proroguing parliament was for the PM’s cabinet to avoid scrutiny.

However, Johnson has denied lying to the Queen about his reasons for suspending parliament, adding:

The High Court in England plainly agrees with us, but the Supreme Court will have to decide.

The Supreme Court has yet to rule on whether or not Johnson acted illegally. Even before this ruling, however, Johnson’s actions have been described as unprecedented, and he’s being called on to resign from his position as PM.