The band behind 'Liar Liar' has released a new anti-Boris track. But it's faced a 'mysterious' hurdle. - Canary 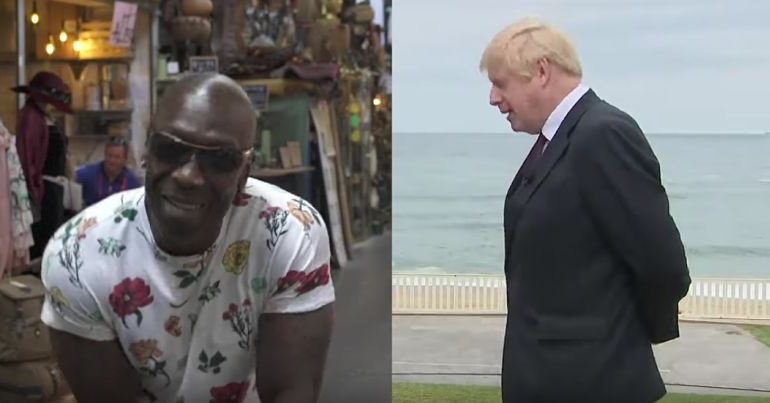 Captain SKA, the band behind the infamous Liar Liar song about Theresa May, has got a new track. This one takes aim at her successor, Boris Johnson. True to form, Captain SKA pulls no punches in taking on the new PM. But the song hasn’t reached people as fast as the group would have liked because it’s faced a ‘mysterious’ hurdle.

Captain SKA and Rubi Dan wrote the song, with vocals by Lauren Johnson. As the band explained on Twitter, the download was due for release on 13 September:

Our new tune! #FUCKBORIS – The download is launched tomorrow on Friday 13th September, download links will appear in the thread below – There's no election yet so they can't ban this one 😂😂 pic.twitter.com/9m7d63ltxS

As the title suggests, it’s not a particularly glowing assessment of Johnson. In fact, it describes the PM as “Donald’s little hobbit” in reference to his relationship with the US president. It also takes aim at Johnson’s use of racist and discriminatory language.

As Captain SKA told The Canary, a “big liar needed a big tune” and Fuck Boris is its attempt to provide that:

Back in 2017, when Liar Liar was rising in the charts, BBC Radio One refused to play it. As the UK was in an election period at the time, it said doing so would breach its impartiality rules. Despite Johnson’s best efforts, however, right now there is no looming election in the country.

So, as Captain SKA said in its tweet, it can’t face a “ban” on those grounds. But the band says it has faced a ‘mysterious’ hurdle:

PLEASE RT FAR AND WIDE! Our new tune #FUCKBORIS was meant to available for download today, but it's not appeared in any shops. Something amiss here 🤔🤔I'll update soon, but please spread the word AND GET READY FOR ACTION.

What's going on ? very very weird our tune hasn't appeared in ANY shops today on launch day. – plenty of tunes with the word FUCK in the title on itunes etc , perhaps it's another word that is the problem……. #FUCKBORIS🤔🤔🤔🤔🤔 https://t.co/cURFnIyBgE

Based on its past experience with the distribution of its tracks, the band expected the song to be available for download on 13 September. That hasn’t happened. But Captain SKA says it should appear on platforms next week.

For many of those who have already heard it, that release cannot come soon enough:

I don't personally type a lot of vulgarity in my tweets, but gosh darn it, this song is just so catchy🎶 https://t.co/YeOBj0EFCm

Can we make this number one? Wicked tune, been dancing round the kitchen to it! https://t.co/Qm3cTLtjiy

This is superb! One to number 1!

So, Captain SKA has another potential hit on its hands. Clearly, “Fuck Boris” is a sentiment that is resonating with the public.