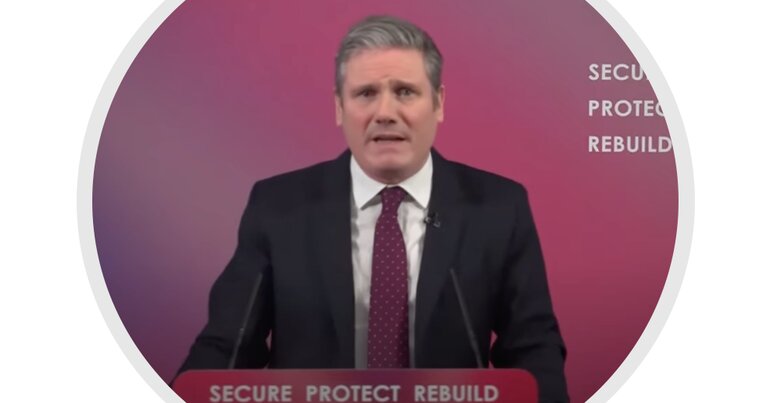 When centrists foisted Keir Starmer on a demoralised and defeated Labour Party membership, they promised he would be ‘forensic‘. But the only word that captures the limp futility of his first year is ‘flaccid’.

Originally, the Left rebranded Keir as ‘Keith’ to dissociate him from the Labour legend he’s named after. Keir Hardie, the Scottish trade unionist who founded the Labour Party, began working the mines at the ripe age of seven. Hardie channelled a life of classist exploitation into a politics to end it. And that was the mission of the Labour Party. So Starmer, a former director of public prosecutions prosecuted people he had previously defended. Not to mention the question marks over his role in covering up the undercover policing scandal.

However, almost a year of impotence later, ‘Keith’ has come to epitomise Starmer’s beige banality. A man with all the charm of the pub bore, who’d find himself outperformed by a talking potato sack. His nasal delivery gives him the sound of a Poundland Ed Miliband, who was himself a Poundland Gordon Brown.

Flaccid Keith has so far failed to land a single punch against the criminally incompetent, corrupt Johnson government.

He’s had a honeymoon with the press, and the centrist Parliamentary Labour Party gave him their full backing. Yet he’s turned it into absolutely nothing. In fact, opposition has been led by unions and working people. Despite pleas for his support, Flaccid Keith either abstained, or sided with government.

The middle of the road to nowhere

Centrism isn’t about finding an objective middle ground. It is based on the assumption that there is no alternative to capitalism. But more than that, it’s based on a belief that capitalism is good, in and of itself. There might be a few rotten apples to deal with, but no major systemic issues. All capitalism needs, centrists argue, is a better manager. They are technocrats, suspicious of democracy. If only they were in charge, all would be well. Or at least, as well as anyone deserves. Because that’s the other thing about centrists, they fully buy into basing a person’s value on their contribution to capitalism.

They’re likely to say things like: “Socially, I’m a liberal. But economically, I’m conservative”. They believe this compromise makes them grown ups. But this is a nonsense, because the two cannot be separated. Economic policy that privileges the already-wealthy over everyone else has social consequences. Those consequences are all around us. Homelessness, poor mental and physical health, addiction, suicide – all derive from this inequality.

And the truth is, centrists aren’t even particularly socially liberal. If they were, they’d be confronting Apartheid in Israel rather than enabling it. They would be backing trans people in their civil rights struggle, not condemning them. They would have backed Corbyn, not assassinated him.

Centrism is a vacuous ideology borne of privilege. It’s what happens when you spend too much time in the company of affluent sameness. A certain type of person starts to believe they’re better than those without, and that sense of superiority turns to contempt. So when the ‘contemptible’ working class found political expression through Jeremy Corbyn, centrists flipped their wigs.

There was no political vision or values behind the centrist coup. It was a tantrum thrown by bourgeois prefects for the capitalist class. Now they have the Labour party, they have literally no idea what to do with it other than nod and curtsy.

Centrists have spent the past year continuing the chicken coup. They’ve purged the party membership of socialists with mass suspensions. They even aimed to decapitate the movement by suspending Corbyn on bogus pretexts. They’ve buried the Forde Report, and any hope of holding to account the centrist staffers responsible for racist abuse against BAME MPs and members. In short, they’ve made the party a hostile environment for anyone to the left of Margaret Thatcher.

And yet at the same time, Flaccid Keith couldn’t bend over fast enough for the Tories. Watching his earnest defence of the indefensible, you’d be forgiven for thinking he was a government minister. He’s meant to be the leader of the opposition.

Keith has ordered his MPs to back (or abstain on) every mistake the Johnson government has made. When school staff and pupils fought the government for a safe learning environment during the pandemic, Keith sided with government. When Health Secretary Matt Hancock’s corruption was exposed in court, Keith refused to call for his resignation. Keith has done nothing but fight the left while assisting the right.

And the results is complete irrelevance. Labour now trails in every poll, and is losing ground in many. Flaccid Keith is a subject of derision and mockery. The empty vessel is sinking.

When Jeremy Corbyn was holding mass rallies across the country and eight points up in the polls, centrists told us he was underperforming. Tony Blair himself stated that Corbyn should have been 20 points ahead. This became the battle cry of centrists in and out of parliament. Any other leader would be 20 points ahead, they said.

So how do they account for Flaccid Keith falling further behind Boris Johnson?

In the 2017 election, Corbyn won the greatest swing to Labour since the post-war government of Clement Attlee. The swing to Labour was greater in 2017 than in 1997. And centrists repaid the achievement by destroying the party. Corbyn’s leadership breathed life into a dead party. Haemorrhaging votes throughout the Blair era, centrist Labour was a busted flush.

Centrists are now trying to memory hole 2008-2017. In their world, Blair left, Corbyn took over, Labour lost, and now they’re back to win again. But this wasn’t what happened. Corbyn and socialism proved popular. So centrists joined forces with Conservatives in a five year assault on the Left to halt a popular movement. Now the Left is gone, centrists are superfluous. They’re too left for the right and too far right for the left. No one wants what their selling except themselves. And so they continue to stumble about, high on their own supply.

Centrists have achieved nothing but civil war internally, and irrelevance externally. And Flaccid Keith seems stuck in a groundhog day, constantly rebranding the party via mostly-ignored presentations against a purple backdrop. He’s not waving, he’s drowning.