The mainstream media lied about the Bristol protests - Canary 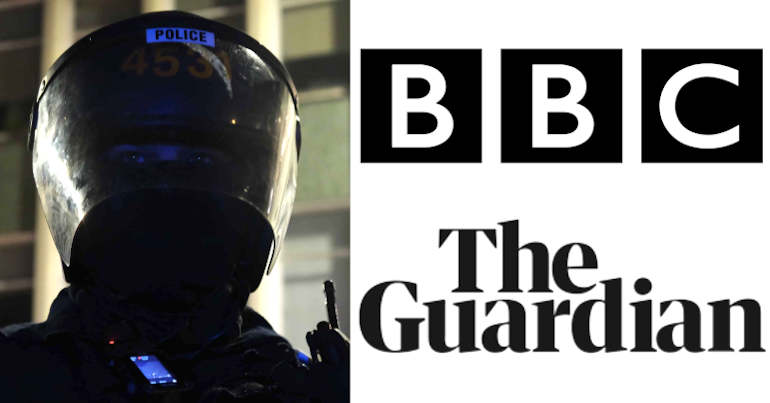 Police with broken bones. Bricks thrown. A “mob intent on violence”. These are just some of the disinformation and lies published in the mainstream media about Bristol’s recent Kill The Bill protests. They’re narratives that are spread by both the government and its puppet police force, and published unquestioningly by the Guardian, Sky News, the BBC amongst others.

The Canary takes a quick look at just some of the disinformation that has been printed.

Where are your broken bones?

On 21 March, after Bristol protesters’ siege of Bridewell police station, the mainstream media quoted a police statement by Will White of Avon and Somerset Police, who said:

One officer suffered a broken arm and another suffered broken ribs. Both have been taken to hospital.

These are men and women out there with the intention of serving and protecting the public – they should never be subjected to assaults or abuse in this way.

Days later, the police admitted that, actually, no police officers had suffered from broken bones. But the damage was done, and media outlets worldwide had spread the lie. The false police statement nicely fitted into the government’s portrayal of protesters’ “thuggery“. The police have a proven track record of not investigating liars in their ranks, so it’s unlikely that the person responsible will face any consequences.

A few days later, on 23 March, The Canary witnessed hundreds of riot police brutally attack protesters who were sitting down on College Green. The BBC was quick to report the police’s statement once again. Avon and Somerset police chief constable Andy Marsh said:

It had the making of a rave or a party rather than a protest…we would be having a very different conversation if we had allowed 200 people to set-up a camp on college green with music, food stalls, and human excrement.

You’re damned if you do, and you’re damned if you don’t. If you’re protesting at the police station, you get attacked. If you take a different approach and protest with music and speeches far from the police station, you’re accused of having a rave and are attacked with even more force. Marsh’s ridiculous addition of “human excrement” in his statement is a deliberate ploy, used constantly by right-wingers, to discredit demonstrators as disgusting and unwashed. Needless to say, his comment is a load of sh*t.

Then, on Friday 26 March, around 1,000 Bristolians demonstrated for the third time against the Police Bill. The protest ended, once again, outside Bridewell police station, which was protected by riot police on all sides: the same riot police who had used extreme violence against Tuesday’s protesters. People sat down in front of police lines for a few hours. As the evening progressed, I witnessed more lines of riot police lining up. They appeared on a parallel street, too, along with their horses and dogs, obviously gearing up to charge at the crowd. Suddenly, they attacked. From my viewpoint, I clearly saw a police officer, who was seemingly out of control, crack his rectangular shield down again and again onto protesters’ heads.

There was a huge amount of footage on social media of these disgraceful police attacks on protesters. But the mainstream media was, once again, quick to report otherwise. The Guardian headline led with the police’s account, saying that bricks and bottles were thrown at officers, rather than leading with an actual account of real events: that protesters sitting down had their heads cracked open by police; that police had used their riot shields as weapons to cause serious injury. The Guardian quoted the police a number of times, even having the audacity to give superintendent Mark Runacres a voice as he said of protesters, “this violent conduct is not acceptable”.

Meanwhile, Sky News reported complete lies about the evening’s events, saying that windows were smashed and police vans were torched:

Hi @nicktaq & @SkyNews, what you reported here—that last night "Bridewell police station in the city centre was once again the scene of disorder with a small number smashing windows and torching police vans"—is a lie, or, if you like, fake news.

Sky News later retracted this, but once again the damage was done; the disinformation was already out there.

Meanwhile, as social media flooded with footage showing the police violence, Priti Patel tweeted that officers had her “full support“. She said:

I am disgusted by the disorder in Bristol and the violence being directed towards the police.

I’m in no doubt the silent, law-abiding majority will be appalled by the actions of this criminal minority.

This is Patel and the Tory government on top gaslighting form again. As the actual “criminal minority” smash their shields into people’s heads, pepper spray protesters and set dogs on them, the narrative is turned on its head, and it is the victims who are called criminals. The government knows that if it accuses its opposition of the very thing its state-sanctioned thugs are guilty of, it might just get away with fooling the public.

It took days for liberal newspaper the Guardian and its sister publication the Observer to publish accounts from protesters on the ground: long after The Canary had published its reports of what really happened. On 27 March, The Observer printed a piece titled Protest is a human right. Again on 27 March, the Guardian published an article about how journalists were being assaulted by police. But this news was only deemed as important because it was a mainstream media journalist from the Mirror who was assaulted. In the same article, the Guardian finally published information about protesters’ injuries, arguably because they were so well-documented on social media that they couldn’t ignore them any more.

On 28 March, the Guardian published a brilliant piece by the Bristol Cable‘s Matty Edwards, who has been on the ground in the city. But Edwards’ article was tagged as ‘Opinion’, while the police’s statements were printed in news reports as unquestionable facts.

This attempt by the Guardian to show that it is still the newspaper of the left has come far too late. The Bristol protests have only emphasised more clearly than ever that the mainstream press, with its concentrated ownership, is there to uphold the status quo, or is too scared to challenge the government or the police for fear of losing its advertising revenue.

This is all too evident when we see a publication like the Independent publishing police images of people wanted for arrest. Being featured in a police press release doesn’t mean a person has committed a crime, yet it does scare people. Governments of domination rely on fear to keep their populations obedient. By publishing these images, the media is helping the state to control its people by attempting to make them so terrified that they won’t dissent.

Disinformation is nothing new

Of course, disinformation and dangerous bias parroted by the mainstream media is nothing new. Back in 1988, Chomsky and Herman wrote about how:

money and power are able to filter out the news fit to print, marginalize dissent, and allow the government and dominant private interests to get their messages across to the public.

The organisation Media Lens has been busy documenting the media’s distorted version of the world for over twenty years, holding popular newspapers and broadcasters to account. Meanwhile, it is radical and local media outlets such as The Canary and the Bristol Cable that are brave enough to tell the truth.

More protests against the Police Bill are planned throughout the country this week. The government wants us to focus our energies on condemning the “criminal minority”, intent on drawing our attention away from the very reason why people are so angry in the first place.

No matter how distorted the media gets, and no matter how violent the police become, we won’t be silenced. The fight to Kill The Bill is far from over.