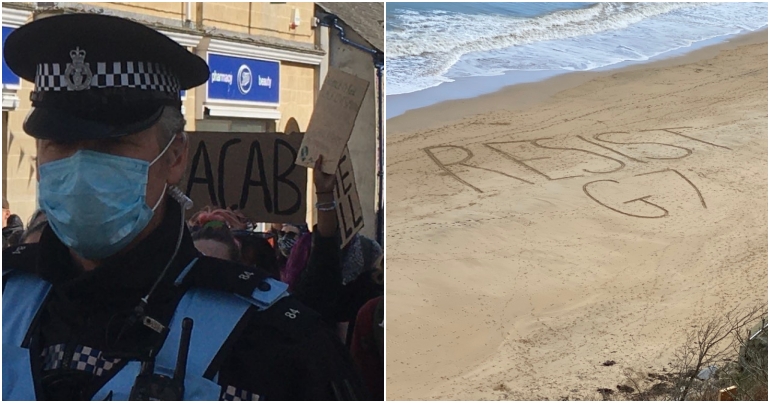 In around six weeks, the G7 summit of world leaders will arrive on my doorstep. Since this was first announced, and as a veteran of previous summits, I’ve been worried about policing. Nothing Devon and Cornwall police have said to date has alleviated my fears.

On 28 April, the force held a Facebook Live event alongside the Cabinet Office, Cornwall Council, and Public Health Cornwall. It was supposed to be a protest special and they’d answer questions left in the chat. However, many of the actual questions on protest were ignored. But the cops did confirm that one random person’s wedding could go ahead. The event finished early because they’d apparently ‘run out of questions’.

In particular, the police refused to answer a question on whether any spycops would be present at the protest.

The police were asked:

At the G8 Summit in 2005, 18 undercover police officers were present, several of whom had sexual relationships with activists. Can you reassure protesters that no undercover officers will be present at the G7 protests?

But it seems the police are unable to give that reassurance since the question was ignored. I contacted the G7 police media team to ask them for a comment about why they didn’t want to answer this question and why they finished the session early when there were questions still unanswered. I have still not received a reply at the time of publication.

It’s clear the police don’t really want to do anything other than promote their own PR and spin. They say they’re happy to allow protests to happen. But their designated sites for protest are all miles away from where the summit is taking place. One such place is in Exeter, 105 miles from the G7. I can’t even imagine why anyone would want to protest there or why the police even think this is a viable option. Falmouth, one of the other designated sites, is at least the media centre for the event. But the designated protest site is in a car park, off the main road, where no-one will see the protest.

Kevin Blowe, campaigns coordinator of the Network for Police Monitoring, told The Canary:

The latest Council of Europe Venice Commission guidance, which Britain has signed up to, says the police have a duty to “facilitate assemblies at the organizer’s preferred location and within ‘sight and sound’ of the intended audience”. Similarly the UN Human Rights Committee last year said “peaceful assemblies should not be relegated to remote areas where they cannot effectively capture the attention of those who are being addressed”. However, the proposed “protest sites” at Truro, Exeter, Plymouth and Falmouth are miles away from where the G7 summit is taking place. This is a deliberate attempt to crush their effectiveness.

Meanwhile, the police are using every opportunity to try to get protesters to talk to them. Throughout the briefing they made reference to their police liaison officers (PLOs) and how these friendly boys and girls in their baby blue bibs can help facilitate our protests. But as The Canary has previously reported, the main purpose of PLOs is to gather intelligence.

In fact, this was a point that was made for us during the Facebook Live event. In answering a question about whether violence was expected at the protests, chief superintendent Matt Longman stated:

I’ve already heard from some protest groups who are attending that they are a bit nervous about this, because they don’t want to be associated with that.

So not only are the police using people who are liaising with them for intelligence, they’re then quoting what people have said to them in a public forum.

And this type of response is exactly why the Resist G7 Coalition has made it clear that, as a coalition, it will not be talking to the cops:

The police will try and divide us. The coalition recognises and respects that groups may, in their individual capacity, feel the need to liaise with the police. But inevitably, those who do engage with the cops will be told, ‘oh but you’re the nice protesters, we’re happy with you. But look at those other nasty people – they’re the ones we’ve got a problem with’.

Divide and rule is, obviously, not new. But it is used time and again to break protest movements. The Resist G7 Coalition has taken great strides in a short time to bring together diverse groups. We recognise our collective power and our collective struggles. This unity brings a lot of strength that the cops will try and break. But hopefully through working together in a respectful way, with a clear code of conduct, we can overcome these efforts.

Protesters are the local community

Another tactic the police seem to be using is othering protesters. Repeated messages are painting those wishing to protest as outsiders – people coming into Cornwall to cause disruption. Protests will be allowed but only if they don’t have an impact or disrupt anyone. But as Blowe stated:

To begin with, “legal and safe protest” does not mean holding public assemblies “without impacting upon residents and businesses”. All protests by their nature cause some temporary disruption and all have some impact on others – that is what they are for. However,  because freedom of assembly and expression are considered vital in a democratic society, the police should know they have a legal duty to avoid interfering with a protest unless certain clear conditions are met. They are also obliged to positively facilitate and protect protest rights where it is possible to do so.

For six weeks, Cornwall has taken to the streets with hundreds of people coming out to oppose the Police, Crime and Sentencing Bill. We have shown there is strong resistance here. And while many of us hope people will travel and join protests here in June, it’s vital that we recognise that protest is coming from and being organised by the local community.

As I’ve previously written, people are in for a nasty shock when the G7 arrives in Cornwall. Nothing that I’ve heard from the police so far has changed this opinion. By refusing to answer protesters’ questions and comment on spycops, the police have shown they’re not prepared to be accountable for their actions.

Their PR spin isn’t fooling anyone. Speaking to non-political people in my local town, there’s a lot of anger. Anger at the disruption the G7 will cause. And anger that the police think they can corral protests into irrelevant locations.

Meanwhile, people are getting organised. Most protest groups are sensible enough not to talk to the police. There will be resistance, and local people are already showing that Cornwall is a vibrant place for protest. We refuse to be divided, whether between different groups of protesters or between perceived notions of who forms the local community. And it’s through acting together that we will build solidarity and put Cornwall on the map as a place of resistance and rebellion.