We should never forget Bobby Sands, nor the brutality of the Thatcher government in Ireland - The Canary 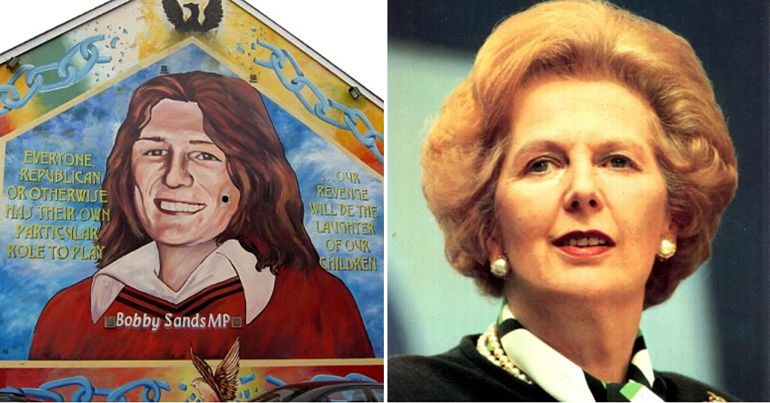 Today marks the 40th anniversary of the death of Bobby Sands inside the H-blocks of Long Kesh internment camp. On 5 May 1981, Sands laid down his life for his and his comrades’ right for recognition as political prisoners. On this day, we should remember the sacrifice he made for the cause of Irish freedom. But his struggle does not just provide an example that all anti-imperialists should follow. It also serves as an important reminder of the ruthless brutality of the British government in Ireland under the leadership of then-prime minister Margaret Thatcher. And that is equally something that we should never forget.

On 1 March, 1976, the British government announced an end to ‘Special Category’ status for members of paramilitary organisations imprisoned for offences related to the conflict in Ireland. This formed part of a multi-pronged propaganda strategy to falsely portray the republican insurrection against British rule as some kind of aggravated crime wave.

In response, republican prisoners began a series of protests to regain the lost privileges, as well as the symbolic importance of prisoner of war status. This included the right to wear one’s own clothes, free association and exemption from prison work. IRA volunteer Kieran Nugent began the ‘blanket protest’ when he refused to wear a prison uniform. Thrown into his cell naked, he draped himself in the only thing available – a grey, prison-issue blanket.

The ‘dirty protest’ and the 1980 hunger strike

After suffering beatings from prison officers on their way to the shower areas, republican prisoners began the ‘no wash protest’, in which they refused to bathe, cut their hair or shave. When prison officers refused to empty their chamber pots, republican prisoners were forced to smear their own excrement on the walls, which marked the beginning of the ‘dirty protest’.

In 1979, their prospects became even bleaker with the election of the right-wing government of Margaret Thatcher in Britain. When it became clear that Thatcher wouldn’t grant even the most modest of concessions, republican prisoners began a hunger strike in 1980. It ended without any deaths when her government appeared to concede some of the strikers’ demands. But the document containing the terms of the agreement turned out to be vague and open to interpretation, and the prison regime was quickly returned to a situation little better than how it was before.

A second hunger strike, and this time to the death

Determined not to be double-crossed again, the new Officer Commanding (OC) of the republican prisoners, 27-year-old Bobby Sands, launched a second hunger strike with a crucial difference from the last. The strikers would stagger their joining of the fast one-by-one and two weeks apart so that each would near death one at a time. As OC, Sands volunteered to go first, making him the most likely to die. On 1 March, 1981, Sands refused his prison food, beginning the second hunger strike in Long Kesh just over two months after the end of the first.

On 5 March, less than a week into Sands’ fast, Frank Maguire, the independent nationalist member of parliament for Fermanagh and South Tyrone, died suddenly and unexpectedly, leaving his seat in Westminster vacant. The republican leadership on the outside hatched a plan. They were forever getting dismissed by political opponents for not having a mandate, but if they stood Sands as a candidate in the resultant by-election and won, they could demonstrate to the British government and the wider world that the hunger strikers’ demands had popular support in the community.

On 9 April 1981, Bobby Sands won the election with over 30,000 votes – almost 10,000 more than Thatcher had won in her home constituency of Finchley in the 1979 UK general election. The victory provided the republican movement with a powerful morale boost and demolished the British government’s argument that they had no support.

But in spite of Sands’ victory, along with international pressure from the Irish diaspora abroad and others around the world, Thatcher refused to budge. On May 5, 1981, Bobby Sands died of starvation 66 days into his fast at 27 years of age. Over 100,000 mourners lined his cortege in one of the largest political funerals in Irish history.

Sands’ death led to international outcry at the treatment of the prisoners and Thatcher’s intransigence in meeting their demands. Critics pointed out that as members of a guerrilla army operating in contested territory, republican prisoners were entitled under the Geneva Convention to be recognised as prisoners of war. One letter, sent from one Bernard Sanders (then-mayor of Burlington, Vermont in the US), stated:

We are deeply disturbed by your government’s unwillingness to stop the abuse, humiliation and degrading treatment of the Irish prisoners now on strike in Northern Ireland…

We ask you to end your intransigent policy towards the prisoners before the reputation of the English people for fair play and simple decency is further damaged in the eyes of the people of Vermont and the United States.

In October 1981, the British government eventually conceded most of the prisoners’ demands; but not before nine more republican hunger strikers had followed Sands to the grave.

This episode perhaps shows more than any other the utter depravity, brutality, ruthlessness and lack of humanity that lurked within the twisted soul of Margaret Thatcher. All but one of the men were under 30 years old and left behind grieving mothers, fathers, brothers, sisters and, in some cases, children – all for the ‘crime’ of fighting back against foreign oppression and discrimination in their own country.

Sands’ brave sacrifice stands as an example that all anti-imperialists and advocates of justice can aspire to. But it also serves as a reminder of Thatcher’s sordid legacy of death and destruction in Ireland.

This article was originally published on 5th May 2020.