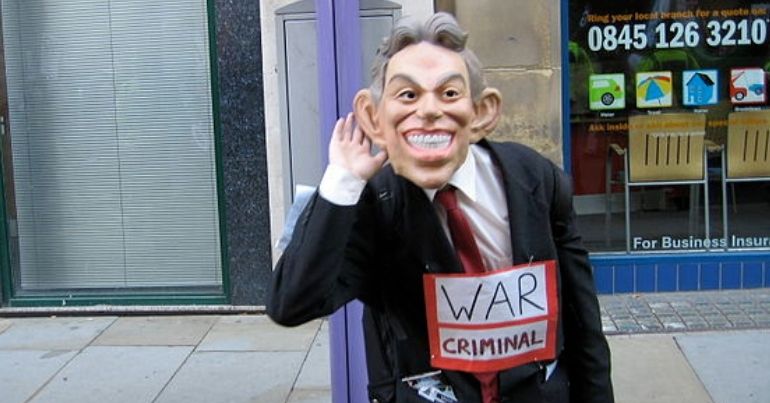 Campbell, now the host of Good Morning Britain, had a smug talk with his old boss about Labour Party politics, political power and vaccines.

Their role in the destruction of Iraq went unmentioned. As did the profound links between colonialism and violence in Gaza, the West Bank and Belfast.

For the British ruling class and its media backers, these are figures of legitimacy, vaccinated against any criticism of their own bloody records.

On 11 May, an inquest found that ten people shot dead in 1971 in Ballymurphy, Belfast, were entirely innocent. The inquest said nine of these ten had been shot dead by British paratroopers. A fact their families had known since the killings. The coroner found:

All of the deceased in the series of inquests were entirely innocent of wrongdoing on the day in question.

Meanwhile in Palestine, the Israeli government was continuing to bombard the population with high-tech weaponry, bringing down a 13-storey tower block. And an Arab man was reportedly lynched by a far-right mob in Tel Aviv.

It is easy for some to sit back and ‘both sides’ what is going on. But as well as being a product of British imperial ambitions, Israel remains a major customer for UK-made military hardware. Israeli violence cannot be disconnected from British arms firm’s profits. The UK government licences millions of pounds worth of arms to Israel annually, as Campaign against the Arms Trade (CAAT) regularly points out.

The British ruling class clearly likes to think of itself as a statesman-like leader in international affairs. In this reading, the likes of Blair and Campbell are the ‘adults in the room”

The flip side of this fantasy is a country that cannot face its own history. This inability means Blair and Campbell can power-chat on breakfast TV while innocents suffer.