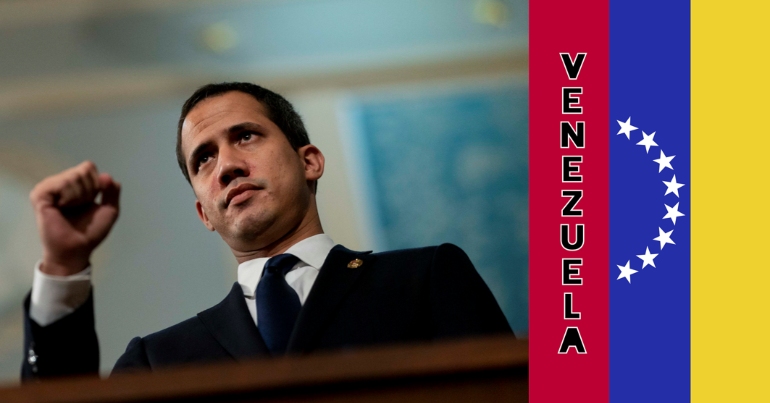 Juan Guaidó, the leader of the US-backed coup attempt in Venezuela, is now proposing dialogue with the democratically elected government of President Nicolas Maduro. This, of course, should be welcomed, especially given the huge amount of harm that the coup attempt has led to.

But there’s an important reality that the corporate-owned press will surely leave out of their reportage on this development: Which is that the Venezuelan government has been willing to negotiate all along. This omission serves to obscure the fact that it is the opposition that has been the obstinate party. Its sudden about-face on the matter, meanwhile, amounts to nothing short of a tacit admission that the coup attempt has failed. And this is something that Washington and its minions in the corporate-owned media are desperate to avoid admitting to at all costs.

On 11 May, Venezuela’s self-appointed ‘interim president’ Juan Guaidó, who led a coup attempt that began in January 2019, indicated that his political faction is willing to negotiate with the Maduro government. Guaidó calls his proposal a “National Salvation Agreement” and says that he hopes it will lead to “realistic and viable solutions” to the multiple problems facing the crisis-stricken South American nation. In a video posted on Twitter, he said that agreement should be sought between opposition and pro-government factions with involvement from the international community.

The move comes amidst growing apprehension on all sides about what stance the new administration in Washington will take toward Venezuela. US President Joe Biden, who entered the White House in January of this year, described his predecessor’s Venezuela strategy as an “abject failure” during his campaign. However, the Hill newspaper reported in March that the Biden administration has “signal[ed] no rush to reverse Trump policy on Venezuela”.

Moreover, Biden himself appears to support the underlying premises that lie behind US support for the coup attempt. This should come as no surprise given that, as The Canary has extensively documented, the coup attempt itself as well as US interventionism more broadly enjoys bipartisan support in Congress (with the notable exception of a small handful of progressive Democrats). The Venezuelan government, meanwhile, has been working hard to improve relations with the US, but seemingly to little avail.

Perhaps most importantly, Guaidó called on the US government to lift sanctions. This is hypocritical on several levels, not least because Guaidó himself cosied up to the far-right Trump administration. Trump officials including convicted criminal Elliott Abrams and Iraq war architect John Bolton were instrumental in launching the coup and escalating the sanctions regime against Venezuela.

Former UN special rapporteur on human rights, Alfred de Zayas, said in early 2020 that US sanctions against Venezuela have led to the deaths of 100,000 people. This number is almost certainly now much higher, especially given that Washington weaponized the coronavirus pandemic to further cripple Venezuela’s economy, and in turn, further harm its civilian population.

Guaidó is therefore complicit in the colossal harm caused to the very people he claims to be ‘liberating from dictatorship’. This arguably renders Guaidó’s kowtowing to the Trump administration an act of treason, especially given that Trump also refused to rule out direct US military intervention to topple Maduro.

Setting the record straight on willingness to negotiate

But there’s something even more significant going on beneath the surface. Because the idea that Guaidó’s overtures represent some kind of act of generosity on his part is completely preposterous. After all, the Maduro government has indicated a willingness to negotiate with Guaidó’s faction from the very beginning of the coup attempt. During an interview with Democracy Now! on 25 January 2019, less than a month after the coup attempt began, then-Venezuelan foreign minister Jorge Arreaza pointed out that “President Maduro has looked for all the paths [and has been] all the way for dialogue”.

He added that the opposition itself was already engaged in dialogue several months before the beginning of the coup, but pulled out at the behest of the US:

We had a dialogue process last year [2018] with the opposition in the Dominican Republic, hosted by the president of the Dominican Republic and the former president of Spain, Rodríguez Zapatero. And when we reached the agreement and we were there to sign the agreement, the opposition received orders from the State Department here, and they didn’t sign.

Arreaza indicated that this was itself a way for the US and its allies in the hardline opposition to lay the groundwork for the coup:

Keep in mind that it’s not just representatives of the Venezuelan government that say that the government was willing to negotiate from the get-go. By rejecting calls for dialogue (on the usual spurious and self-serving grounds), Elliott Abrams himself tacitly acknowledged the Maduro government’s willingness to negotiate. He said in February 2019:

Maduro has proven he will manipulate any call for negotiations to his advantage, and he has often used so-called dialogues as a way to play for time. We urge all involved to deal solely with the legitimate Guaidó government. The time for dialogue with Maduro has long passed.

In other words, it has been the hardline opposition and their puppet masters in Washington who have been rejecting dialogue up until now.

Given these facts, it is clear that Guaidó’s belated call for dialogue is all but an admission that the coup attempt has failed. Of course, given his and his US backers’ own earlier rejection of negotiations, the move is a cynical ploy to desperately wrangle whatever they can get from their increasingly weakened position. After all, as The Canary has previously reported, Guaidó is not even the leader of the National Assembly anymore. As a result, he subsequently lost recognition from the European Union of his status as ‘interim president’.

The coup attempt has degenerated into such a pathetic failure that it is increasingly becoming a sorry parody of itself. And the corporate media’s attempts to obscure that fact are, in turn, becoming ever more transparently desperate.