Palestine: here's where to go to a demo this weekend - Canary 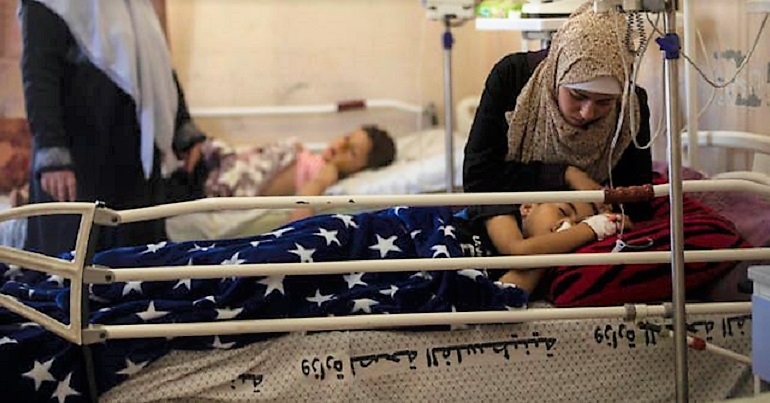 The situation in the occupied territories is rapidly becoming a human catastrophe. Israeli forces are killing more and more people. Hamas is increasing its assault and killing people, too. But it’s ordinary people caught in the crossfire. Palestine may physically be thousands of miles away, but in the UK you can send its people a message of support. Because this weekend, demos are happening across the country.

Since 10 May, the Israeli army has launched a number of deadly airstrikes on Gaza.

Israel claims Hamas has killed seven people, including a six-year-old boy and a soldier. And now, Israel is getting ready for a potential ground invasion of Gaza. As PA reported, it has massed troops along the border and called up 9,000 reservists.

So, it’s well past the time when we need to act.

On Saturday 15 May, there are demos around the UK. As Purdy-Moore wrote, the Palestine Solidarity Campaign is leading a national day of action. The group has organised protests in cities across the UK, including London. 15 May is also Nakba Day. As Al Jazeera wrote:

May 15, 1948, is a date inked in infamy for generations of Palestinians who know it as the Nakba, or “the catastrophe”, after the declaration of the state of Israel in Palestine.

So, people will be protesting Israel’s apartheid against the Palestinian people.

There are over 30 Palestine demos happening across the UK. Stop The War Coalition (STWC) have done a round-up of them. Several are in major cities, but people have also organised local demos. Some of them include (with Facebook event links):

There is also another demo happening in London. The group Apartheid Off Campus has organised a joint Colombia/Palestine demo. As The Canary previously reported, in Colombia police have been killing civilians who protested proposed government tax hikes. So, there will be demos outside both the Colombian and Israeli embassies:

This Saturday meet at the Colombian Embassy in London at 12pm, then march to the Israeli Embassy.

Watch out for the feds

But as always, if you’re attending a Palestine demo expect a police presence. As The Canary‘s Emily Apple previously wrote, make sure you know your rights. Follow these simple steps from legal group Green and Black Cross to protect yourself on protests. Make sure you read The Canary‘s full details of them here:

Also, watch out for the so-called ‘Blue Bibs’. These are police liaison officers. They may appear friendly and make idle small talk. But they are actually trying to get info on you and those you’re protesting with. So, do not engage with them at this weekend’s demos.

If you can’t physically get to a demo, at 5pm there is a global online rally via Zoom. You can register for that here. On social media, make sure you use #FreePalestine, #SaveSheikhJarrah, and #Nakba73.

The Palestinian people need our support. Because while our politicians sit on their hands, people are dying. The very least we can do is get out on the streets. We can send a message of resistance to all parties involved. And we can also show the innocent people suffering at this time that we care.