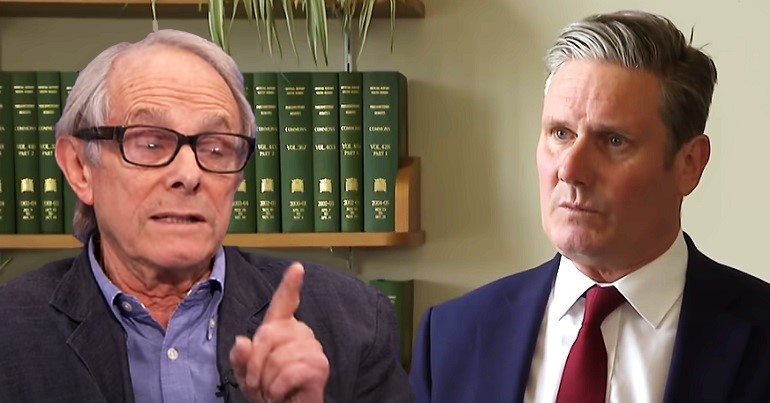 Director Ken Loach has slammed the Labour Party leadership. In a now-published letter, he takes aim at both Keir Starmer and the party’s general secretary David Evans. It’s over their actions towards his Constituency Labour Party (CLP). And Loach pulls no punches – slating their “ludicrous behaviour” and “conscious attempt to destroy” his CLP’s leadership.

The situation in Bath: Loach intervenes

The letter is specifically about Bath CLP. As The Canary previously reported, the Labour Party machinery has subjected it to part of its ongoing purge of left-wing members:

In Bath, the party has put a stop to a meeting to elect new officials. It also barred all motions there, except one which (ironically) marked the death of George Orwell.

Bath is Loach’s CLP. And his letter is damning.

You can read the full letter via Labour Briefing here. In it Loach outlines what the party machinery has inflicted on Bath CLP.

But it was Loach’s broader points that were most caustic.

He accused the party machinery of ‘consciously’ trying to ‘destroy’ Bath CLP’s leadership:

In any competently managed organisation, this ludicrous behaviour would not have been allowed to continue. The inefficiency of the Labour Party is nothing new, it has regularly failed its members. but these actions suggest a conscious attempt to destroy a CLP leadership that was functioning well, carefully following rules, with a positive determination to attack the local Tory and Liberal establishment.

Loach said many members felt ‘disillusioned’ and ‘cynical’ about the party, adding:

The Labour Party is seen as a useless, self-serving clique, a waste of time for those who really want to make a difference.

Starmer and Evans: orders from the top

Also, he directly accused “the top” of the party of ‘approving’ the regional officer’s actions. Loach said:

There is a clear determination to drive out anyone who showed support for [Jeremy] Corbyn and [John] McDonnell’s programme of radical change.

He finished by saying:

The aim of the current leaders would seem to be to have a small, tightly disciplined party, with few troublesome activists, where policy is endorsed by a docile conference — standing ovations and little discussion. Leaders are then not accountable to members, but speak to the voters directly through a media that welcomes a Labour Party that will make no substantial changes to the established order.

Loach’s points may well resonate with many Labour members across the country.

As The Canary has been documenting, CLP’s accusing the Labour machinery of attempting to shut them down has become widespread. Up and down the country, the party has targeted left-wing members and committees. Moreover, some Corbyn-supporting members have been leaving the party.

So, Loach’s final word perhaps reflected the despondency of a lot of members:

This may be your party, David Evans and Keir Starmer, it is not ours.

It’s unlikely Loach’s intervention will rattle the party’s leadership. But what it does show is the deafening disquiet that now exists in Labour.