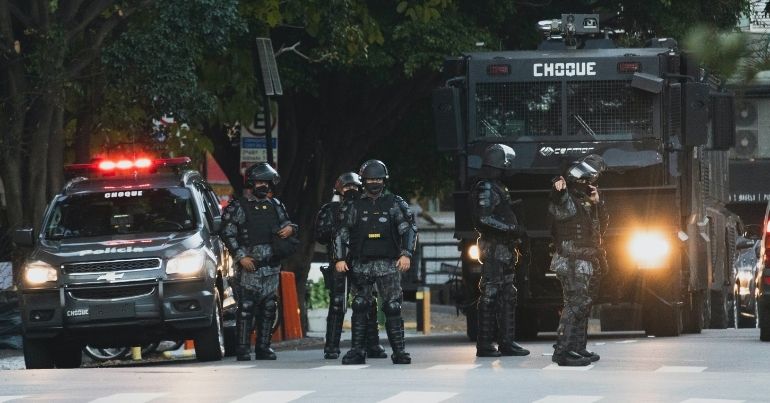 On 6 May, police carried out the deadliest raid in Rio de Janeiro history. This was executed in the predominantly Afro-Brazilian favela, Jacarezinho. On 15 May, Kill the Bill and United for Black Lives are marching on the Brazilian embassy in London calling for justice.

On 6 May, Rio de Janeiro police launched a raid on the favela neighbourhood of Jacarezinho. Police were allegedly searching for drug traffickers. Authorities launched the raid in spite of a Supreme Court order suspending police operations in Rio de Janeiro’s favelas. At least 28 people were killed in the raid, making it the deadliest police raid in Rio de Janeiro’s history.

human life was worth nothing here. It was a total massacre, a witch-hunt, a horror film I never thought I’d see in real life.

The number of people killed in this police operation is reprehensible, as is the fact that, once again, this massacre took place in a favela.

Even if the victims were suspected of criminal association – which has not been proven – summary executions of this kind are entirely unjustifiable. The police have the power to arrest – but the courts have the duty to prosecute and judge those suspected of committing crimes.

Explaining the current situation in Brazil, a Twitter user shared:

WHAT'S HAPPENING IN BRAZIL – A THREAD

In addition to a genocidal president, who has denied vaccine offers ELEVEN TIMES and has let 414 000 DIE. Today happened the worse slaughter registered in RJ committed by the police force in the favela of jacarezinho. AT LEAST 25 DEAD! pic.twitter.com/vmp0h5YDkH

Speaking out against Brazilian president Jair Bolsonaro’s policies in the aftermath of the massacre, federal deputy of Brazil’s Socialism and Liberty Party David Miranda shared:

In Brazil yesterday, we had a police massacre that left 25 people dead in the Rio favela of Jacarezinho, where I grew up and my family lives.

I made this video in English in the hope that the world can understand the impact of Bolsonaro's policies on our lives. Please watch🇧🇷 pic.twitter.com/oeipTttnN4

International human rights bodies are calling on the state to carry out an independent investigation into the Jacarezinho massacre.

In spite of this, Bolsonaro took to social media to congratulate Rio de Janeiro police on the deadly operation. He stated:

I congratulate the Civil Police of Rio de Janeiro.

by treating traffickers who steal, kill and destroy families as victims, the media and the left make them equal to ordinary citizens who respect the laws and others.

Experts warn that authorities continue to use the war on drugs to surveil, criminalise, and kill Black people across the globe.

Speaking at the UN Commission on Narcotic Drugs in April, chair of the UN Working Group of Experts on People of African Descent Dominique Day said:

Globally, the war on drugs has disregarded the massive costs to the dignity, humanity & freedom of people of African descent, despite compelling evidence that it has succeeded better as a means of racial surveillance and control than as a mechanism to curb the use and sale of narcotics, which has only grown dramatically in the nearly half century since the War on Drugs began.

Brazil is emblematic of how the drug war is used as justification to exploit & exterminate a Black pop to whom the White pop feels superior.

(True, Black & White in Brazil aren’t tidy categories, but Brazilians know on which side of the divide they land). #ForaBolsonaroGenocida

The Jacarezinho massacre took place amid the coronavirus (COVID-19) pandemic, which continues to kill Black Brazilians in disproportionate numbers, and against a backdrop of deeply entrenched socio-economic inequalities.

Black Brazilian coalition Coalizão Negra por Direitos called on Brazilians to take to the streets on 13 May to protest the Jacarezinho massacre, police brutality, and the injustices that continue to plague Brazilian society. Jacarezinho based organisation Lab Jaca shared:

Brazil’s Black coalition @coalizaonegra is calling for nationwide protests on May 13 to demand justice for the victims of the Jacarezinho Massacre in Rio and of all police ops that left a trail of death in impoverished communities and slums. #13DeMaioNasRuas #ChacinaDoJacarezinho pic.twitter.com/KwOOwlR3Za

Highlighting the significance of 13 May, Matthew Clausen tweeted:

On May 13, a historic date of the formal slavery abolition act in Brazil, we call for demonstrations to end of black genocide, the murderous police operations and everyday slaughters. No bullet, no hunger, and no Covid-19. Read: https://t.co/DCbDUG3izR#CoalizaoNegraPorDireitos pic.twitter.com/TFCO98j2CJ

#13DeMaioNasRuas do Rio Grande do Norte !✊🏿

Solidarity in the UK

On 15 May, Kill the Bill campaigners announced a march on the Brazilian embassy in London:

Afro Brazilians are being murdered by the police in Favelas in Brazil.

Protest at the Brazilian Embassy in London, today 12pm‼️

The protest is in solidarity with UK-based Afro-Brazilian groups Frente Preta and Encrespa Geral, and Jacarezinho’s Black Brazilian community.