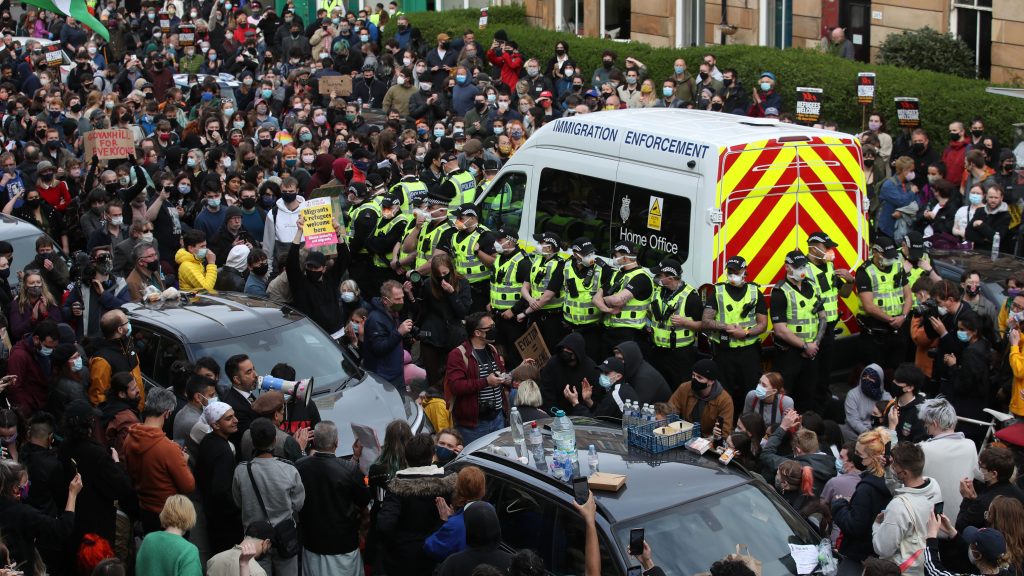 People have been celebrating a massive community victory after police released men detained by Border Force officials in Glasgow after protesters surrounded their van and prevented it from leaving.

Demonstrators in Kenmure Street, Pollokshields, blocked the immigration enforcement van for hours on Thursday, with one lying underneath the vehicle.

Around 200 protesters were at the scene, with chants of “Leave our neighbours, let them go” and “Cops go home” shouted as a ring of police stood around the van.

The solicitor for the men tweeted the moment he went to tell the men that they would be freed:

This was the proud moment that after hours of negotiations with @policescotland I went into @pritipatel enforcement van to tell 2 men they were free because of the power of the people & #PeopleMakeGlasgow ❤️ #EidMubarak 🏴󠁧󠁢󠁳󠁣󠁴󠁿 pic.twitter.com/mgkiBu516K

Following their release, the men thanked the crowd:

well done to everyone who was able to show up and do their bit!! Fuck the home office and their racist hostile environment policy #Glasgow #RefugeesWelcome #KenmureStreet pic.twitter.com/Af6gmeN2BX

Mohammad Asif, director of the Afghan Human Rights Foundation, was one of what he said were hundreds of neighbours protesting against the action on Thursday.

He told the PA news agency earlier on Thursday: “We’re here against the hostile environment created by the Tories and the British state.

“The same people who run from the British and American bombs put at the back of the van right now. And they are about to be deported.

“And it’s on Eid you know … the guys are not even allowed to pray. How do you do that in a democratic society? It’s a sad day.”

Asif, who left Afghanistan as a refugee himself in 2000, said the atmosphere among the protesters was peaceful.

Wafa Shaheen, head of services at the Scottish Refugee Council, said she was “shaken and angry” at the Home Office’s decision to “force people from their homes on the first day of Eid” and she condemned the “heavy-handed approach”.

Tom, a neighbour who joined the protest, compared the immigration operation on Eid to a police raid on Christmas Day.

“The solidarity shown today shows the community will not stand for their neighbours being dragged from their homes.

I’d ask Christians to reflect on what it would feel like to have your house raided on Christmas Day.”

Lotte, an artist and member of the Scottish tenants union Living Rent, lives on a street nearby. She said she joined the protest when she saw a small group outside the property on Kenmure Street at 10am on Thursday.

“I’d like to express my utter disgust at the brutal removal of my neighbours from their home.

It is an awful thing to do on any day, but today being Eid makes it 10 times worse. I hope they will let our neighbours go.”

The actions in Glasgow show what’s possible when communities come together:

The men have been released. What a fabulous example of how collective direct action works! https://t.co/GWWzclLxHQ

The Anti Raids Network also tweeted about how the action started:

Think the important lesson here is to never be afraid to make the first moves, even if it might seem scary at first. With raids you gotta move fast, and the risks of inaction are too great. https://t.co/nxDitmC45M

This is so true. Raids happen quickly & often early in the morning. The only way to successfully resist them is for the necessary info, will, courage & relationships to come from the neighbourhoods in which they take place. https://t.co/wruhcuAUHd

The network also shared information about how people can help organise and resist immigration raids in their areas:

If you don't have a local group, you can also start your own with this handy guide:https://t.co/qfZZxt7TAW

Here's a list of things people can do to resist immigration raids and the hostile environment: https://t.co/strH8vR9RG

It also shared information about an online workshop where people can learn more:

Inspired by today's resistance in Glasgow and want to organise against raids in your area? Sign up to this online workshop! https://t.co/vP4s7k3US8