We need a courageous radical media to report on the Bristol 'riot' trials, not bootlicking journalism - The Canary 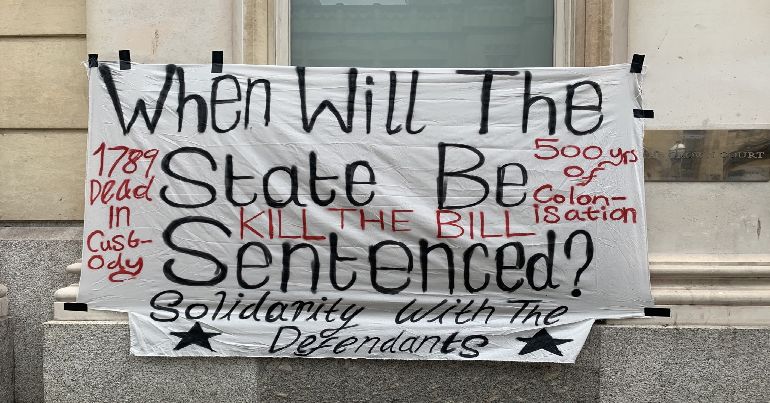 Last week, five people were given prison sentences totalling more than 14 years between them.

Over 75 people have been arrested after a confrontation with the police during Bristol’s 21 March Kill the Bill demonstration against the authoritarian Police, Crime Sentencing and Courts Bill. So far, 29 of them have been charged with riot, which carries a maximum of ten years imprisonment. Two of them are in prison on remand awaiting trial.

The people in court now are those who stood up and defended their comrades against the violence of the police, and they deserve our support.

But the Bristol defendants are not just up against the police and the court system, they also have the power of the mainstream media stacked against them.

If we are serious about defending our comrades facing repression, then we need a courageous and radical media that’s ready to turn the state’s narrative on its head.

Mainstream media (MSM) journalists have – right from the very start –  been willing accomplices in the repression of the Kill the Bill defendants.

In the days following the clash at Bridewell, defendants’ mugshots were circulated by the likes of the Bristol Post, The Independent, and Sky News, helping the police to find those who had fought back.

The mainstream media also parroted the police’s claims that officers had suffered broken bones at the hands of protesters. It was left to the likes of The Canary to point out the long history of police forces making false claims like this in order to control the narrative. And – shock! horror! – less than a week after 21 March, it was uncovered that the police had indeed lied about their injuries.

There was a slight shift in the MSM narrative in the weeks following 21 March, as riot police attacked Kill the Bill demonstrators again and again in Bristol, and outlets such as the Guardian did deem to report on the worst of the police violence. Videos were circulated of police bringing their heavy riot shields down on the heads of demonstrators. These ‘revenge’ policing tactics were condemned in an All Party Parliamentary inquiry in July.

But the police’s violence has quickly been forgotten by MSM journalists, and replaced with across the board condemnation of those arrested after the clash of Bridewell. The MSM stories of the last week read as if the demonstrators had attacked a group of defenceless school children – not defended themselves against the aggression of a mob of tooled-up riot police.

The story being told in the mainstream media would leave you believing that no-one in Bristol (or anywhere else) could support the defendants. However, a look at the grassroots support for those in court tells a very different story. A crowdfunder to help support them in prison has raised – as of the time of publication – over £17k in just 5 days.

The MSM is owned by billionaires; its not in their interests to support our struggles

There’s a good reason why the MSM is subservient to those in power. Most UK MSM outlets are controlled by a handful of billionaires. Research in 2019 showed that just six billionaires control the majority of the UK’s national newspapers. It will never be in the class interests of these media tycoons to support people’s struggles against power, because the success of our struggles would jeopardise their profits.

Those sentenced last week are the ones who have been dehumanised

In sentencing the five defendants on 30 July, judge Patrick – laughably – said that they had “dehumanised” the police.

But it’s the defendants that have been dehumanised, not the police. Their photographs were plastered all over the tabloid press last week, and the police allegations against them were reported uncritically without a whisper of the police violence that had been levelled against them. The press repeated the police’s claims that the demonstrators were a ‘mob’, and reported the highly personal statements made on behalf of the defendants in mitigation, with no concern for their privacy. In contrast, the judge treated the police’s statements saying they were traumatised by the ‘violence’ from protesters with the greatest sympathy.

‘Well didn’t they plead guilty?’, you might ask; ‘doesn’t that mean they admitted the allegations against them?’. Well, while a guilty plea does technically mean that the defendants admitted the allegations, the reality is more complicated. When someone is charged with a crime, they are told by the courts that they will get a shorter sentence if they plead guilty at the earliest opportunity. What that means for defendants is a decision on whether to fight their case and risk more prison time or plead guilty with the hope of a shorter sentence. Defendants that plead guilty can’t challenge any of the police account except – to a very limited extent – in mitigation. As you can imagine, this can entail accepting all sorts of allegations against them that – to be frank – may be total bullshit.

Of course, in reality judges don’t always play by the rules. In the highly politicised context of riots, those that enter the first guilty pleas may end up getting treated the most harshly, as judges want to ‘set an example’ to deter more people from rebelling against the system.

The accounts of 21 March that have made it into the MSM so far are the state narrative – pure and unadulterated. This is creating a situation where the state’s eye view of what happened on 21 March is being accepted as truth. It’s the job of a truly radical media to turn that narrative on its head.

We need to create our own narrative

We need to work as hard as we can to tell the real story of what happened at Bridewell, and to do that we need to develop a strong, radical media which serves the people instead of power.

Bristol already has a relatively strong radical media, with media cooperative The Bristol Cable and grassroots media website Alternative Bristol providing accounts of what happened at Bridewell. Local online magazine Bristol 24/7 also stepped up and republished parts of the statement in support of those facing charges. Nationally, Autonomy News, Phoenix Media Cooperative, and Freedom News – as well as The Canary – have provided a different perspective too. But the role of the MSM in the state’s repression of those arrested at Bridewell shows how important these alternative platforms are.

Grassroots media has played a big part in previous campaigns against state repression. In the 1990s, the Trafalgar Square Defence Campaign and others published their own newsletters in support of those facing repression after people rioted against Margaret Thatcher’s Poll Tax. Local alternative media newsletters also played a big part in spreading a radical perspective during the 1990s movement against the 1994 Criminal Justice Act. Perhaps the most famous was SCHnews – or Squatted Court House News – a collective that formed during an occupation of the old court building in Brighton. SCHnews kept on running for 20 years. The transnational movement against globalisation – which kicked off in earnest with 1999’s battle of Seattle – triggered the creation of decentralised Indymedia collectives that provided an autonomous space for people to post their own news.

We need to create our own media

Grassroots alternative media has suffered a serious blow with the advent of social media. Social media platforms provide a space that is accessible, but which is tightly controlled by big corporations. For example, Instagram – which is owned by Facebook – ‘shadowbans‘ accounts sharing radical content. This means that radical voices are actively deprioritised. Shadowbanning has been used recently to silence Palestinian voices calling out Israel’s colonial policies. We need to be thinking about ways we can work round this to ensure our content is reaching people.

If we want to ensure that there is a space for truly radical voices, we need to cultivate and grow a truly radical media to counteract the state narrative. This is an essential part of building our autonomy and ability to defend our communities against the state’s narrative.

Featured image provided to The Canary with permission