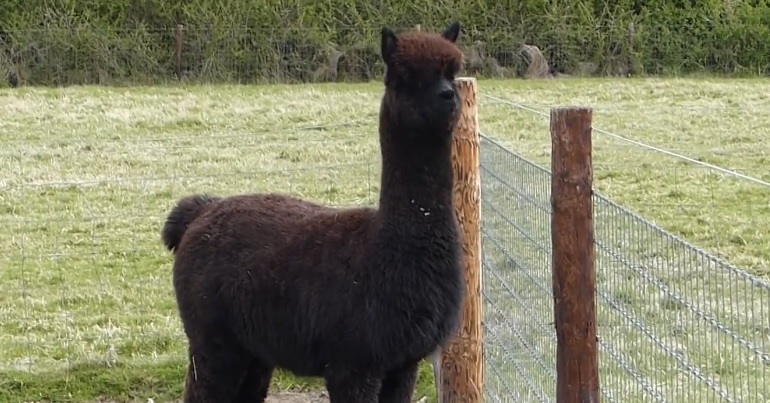 The Conservative government’s flawed TB testing regime has already cost over 140,000 badgers their lives. In less than 24 hours, critics say it could count an alpaca called Geronimo as its latest victim.

Thousands of people, including the conservationist Chris Packham and ex-Badger Trust CEO Dominic Dyer, are calling on the environment minister George Eustice for a stay of execution for Geronimo. That’s because they believe the flawed TB testing regime has wrongly put a target on his back.

The alpaca farmer and veterinary nurse Helen McDonald brought Geronimo to the UK from New Zealand in 2017. As Dyer explained in a video on the issue, Geronimo had TB tests back in New Zealand that showed he didn’t have the disease.

Well done Rod Liddle & the Sun in getting behind the “Save Geronimo” campaign. The pointless slaughter of this alpaca sums up cruel madness of Defra TB policy that has led killing over 140,000 badgers killed since 2013 @TheSun @ZacGoldsmith @DefraGovUK https://t.co/IHMoG8raFq pic.twitter.com/dKgDIfUOzD

After arriving in the UK, however, he had further tests and those tests suggested he did have it. As a result, the Department for Environment, Food and Rural Affairs (Defra) says he must be killed. McDonald has taken the situation to the courts, but ultimately lost the case. So if she doesn’t kill Geronimo by 5 August, the authorities will do it for her.

Here’s the rub though. The UK tests on Geronimo apparently aren’t “validated” for alpacas. His vet Bob Broadbent told ITV News in 2020:

The test that was used on him when he came into the country was not the test that’s validated in alpacas. There’s a really good blood test that works well, that we know works well, and Defra amended that test to the way in which they use it in cattle, and we don’t know how that test works in alpacas. And I suspect that that test, amended, gave a false positive result.

Defra claims that the test used on Geronimo is “highly specific”. But Alastair Hayton, who was involved in the development of the test, said there was “very reasonable doubt from a clinical and epidemiological perspective as to whether the animal [Geronimo] is a true M bovis [TB] positive” in a statement read out in a High Court hearing.

McDonald says the UK tests were “unsound, unethical and dishonest”. In addition to this, she argues that Geronimo is “completely fit and healthy”, despite data on TB in alpacas showing that “they die very quickly” from it. So McDonald wants to pay for Geronimo to be re-tested, using a different test. But that would be against the law. So it’s now essentially Geronimo’s final hour and Dyer, Packham and others are calling for the government to change course:

First Badgers – now healthy Alpacas @DefraGovUK has created a ‘suspicion of disease’ in Geronimo . His owner took a case to the High Court but the judge re-issued a warrant for his slaughter . C'mon @MPGeorgeEustice give the big eyed fluffy guy a break ! https://t.co/cwEYeLMho3

A dreadful example of everyday #speciesism. Animal lives are simply expendable and can be ended on a whim. A desperate effort now to save the life of Geronimo, an alpaca due to be killed on Thurs. Please sign & share. https://t.co/K7MbQoouQM

A Defra spokesperson told The Canary:

We are sympathetic to Ms Macdonald’s situation – just as we are with everyone with animals affected by this terrible disease. It is for this reason that the testing results and options for Geronimo have been very carefully considered by Defra, the Animal and Plant Health Agency and its veterinary experts, as well as passing several stages of thorough legal scrutiny.

But Dyer argues that the situation “really shows how terrible the whole TB control system” is in the UK. He explained that “the government are using ineffective TB tests” to test cows, therefore allowing the disease to spread among them and into wildlife. As a 2019 paper by veterinarian Iain McGill and Born Free’s Mark Jones noted, the traditional skin test used for detecting TB in cows “has a sensitivity of around 50 per cent” and therefore is likely “missing half of the infected animals” in a tested herd. Dyer says that despite this “badgers are then blamed for spreading the disease” and killed in their hundreds of thousands. Moreover, the government doesn’t test badgers, before or after killing them, to see if they have TB. Analysis of badgers ‘found dead’, however, such as those killed on roads, suggests that TB levels among the species is low.

In short, the government’s TB testing regime is currently less than adequate. Geronimo may be the latest victim of the flawed system, but with experts saying that badger killing is set to continue indefinitely, he certainly won’t be the last.