Explosive survey on TB in badgers shows the 'cull' isn't just a disgrace, it's a national scandal - The Canary 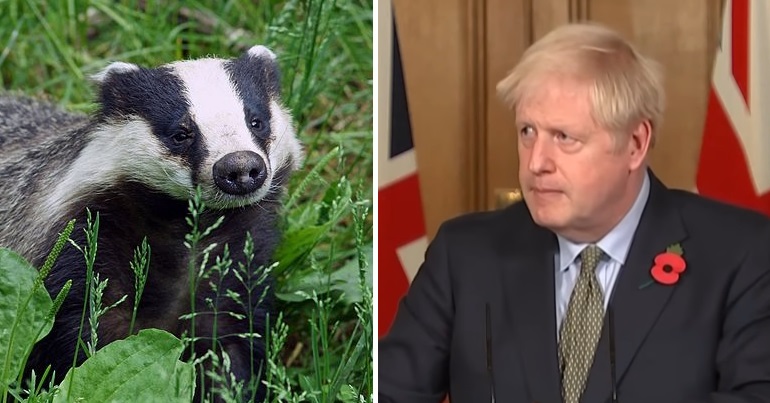 The Tory government announced in September that it had approved the further killing of tens of thousands of badgers in England. According to the Badger Trust, since 2013 over 100,000 badgers – a supposedly ‘protected’ species – have been killed in the country.

The justification for that killing, or ‘culling’ as advocates of the slaughter prefer to say, is that badgers transmit tuberculosis (TB) to cows. So to tackle TB in the latter, the argument goes that the former must die. A government-funded survey, however, casts serious doubt on that argument. Moreover, though that survey has only recently come to light, researchers completed it in summer 2018.

So the government’s decision to push forward with the 2020 cull looks less and less like a disgrace, and more like a national scandal.

The publicly-funded survey encompasses two reports. Those reports assessed the prevalence of TB in badgers ‘found dead’, such as those killed on roads, in certain areas of England. The University of Nottingham focused on areas in the North of England and the University of Surrey assessed areas in the South. As the Badger Trust noted:

The BFDS [Badgers Found Dead Study] is reported to have cost almost half a million £GBP, and the results from the work undertaken in 2016 and 2017 was only released in October 2020, despite both reports being dated to Summer 2018.

Overall, the northern areas study analysed 610 badgers and found that one in 12 badgers were infected with TB. Furthermore, of the badgers the University of Nottingham found with TB, 92% were only ‘latently’ infected. The Badger Trust describes this level of infection as “not showing symptoms and non-infectious”. In the South, the prevalence was even lower. Only 1% of 312 badgers had TB.

Both studies focused on ‘edge’ areas of England. These are counties the authorities have categorised as at medium risk for bovine, i.e. cow, TB.

Like most of the badger killing licences since 2013, the 2020 ones proved controversial. That was in no small part because, in March, the government claimed it was phasing out badger killing. So it came as a shock to many that, rather than starting a phase out, the government extended the killing to 11 new areas. That’s in addition to the 33 existing ones. And it authorised the deaths of over 60,000 more badgers in the autumn.

The recent release of the BFDS has added to the controversy. It augments the already extensive catalogue of evidence throwing serious doubt on the scientific grounds for the killing. Also, as the Mirror pointed out, there have been three “culling seasons” since the BFDS was finalised in summer 2018. Speaking to the outlet, Badger Trust CEO Dominic Dyer asserted that the survey:

Dyer also took to Twitter and accused the government of “hiding the data” for two years:

The Government have hidden a Defra funded badger road kill study that shows only 1 in 12 badgers carry TB whilst they issue cull licences that will lead slaughter over 165,000 badgers pushing species verge of local extinction @IainTime @ConservativeAWF _ @BellaLack @emeliobedelio pic.twitter.com/gyAxLpAlpR

The Canary contacted the Department for Environment, Food and Rural Affairs (Defra) and Natural England to ask if they had access to the survey’s findings when making decisions over the last three ‘culling seasons’. In response, a spokesperson said:

Bovine TB is one of the most difficult and intractable animal health challenges that the UK faces today, causing considerable trauma for farmers and costing taxpayers over £100 million every year.

No one wants to continue the cull of a protected species indefinitely. That is why we are accelerating other elements of our strategy, including vaccination and improved testing so that we can eradicate this insidious disease and start to phase out badger culling in England.

Defra also asserted that it delayed publication of the survey “to allow the researchers time to finalise further analysis and publish in a peer reviewed journal”, in line with Defra policy. It also said it received the Nottingham University final report in July 2018 and the one from the University of Surrey in January 2019.

Professor Malcolm Bennett, who prepared the Nottingham University study, confirmed to The Canary that the report was sent to Defra in June 2018. He added:

My understanding, from Defra, is that they and APHA [Animal and Plant Health Agency] have been using the Report in discussing policy.

One of the most demonised protected species in England

Another recent report, by the Wildlife and Countryside Link coalition, looked into wildlife crime in 2019. It asserted that badgers are “one of the most demonised protected species in England and Wales”. The report said:

It is persecuted by a wider cross section of society than any other species. Sett interference, badger baiting, shooting, snaring and trapping, poisoning, and hunting and lamping badgers with dogs, all take place at scale.

In short, badgers face numerous threats and persecution in England. As a protected species, the government should be leading by example and doing all it can to mitigate the dangers they face. Instead, it’s adding to their perilous situation by licensing their extensive TB-related killing, year on year. Even when in possession of evidence that suggests they may have low levels of TB.

That’s not just disgraceful amid a biodiversity and climate crisis – it should be a national scandal.