Dogs and babies: how the savagery of the Afghanistan war is being re-written in pictures - The Canary 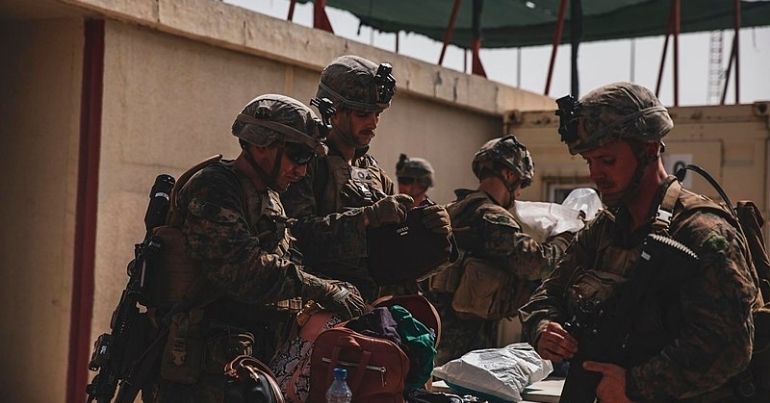 Soldiers helping kids and a former British marine trying to get rescue animals out of Kabul. These have become some of the dominant images of the western evacuation from Afghanistan. They’ve started to conceal brutal truths – decades in the making – some of which I witnessed there as a soldier and journalist. That cannot be allowed to happen.

We continue to support vulnerable civilians in Afghanistan as they prepare to fly out to safety. As well as helping to secure the airport and evacuating civilians, we've provided blankets, food and water, sanitary packs and baby milk for vulnerable families. pic.twitter.com/2yUqNb5Vy5

The images are heart-warming and sickly sweet. This is precisely the point of them: to humanise and soften a pointless, 20-year war that wreaked untold havoc on one of the poorest nations on earth.

The life of every animal is precious and quite rightly the public is completely behind the hero that is @PenFarthing. Please support @Nowzad and the mission to get his team and animals back to the UK from Afghanistan. pic.twitter.com/bexHgzqnWv

As an Afghanistan veteran who has worked as a journalist in the country, I think it’s worth reviewing what that record is before this sickly sweet PR comes to dominate. To do that we can take a look at just a few aspects of the war.

Brown University’s Costs of War project, as reported by the US magazine Task and Purpose, registers an astonishing death toll in Afghanistan up to October 2018. Especially for a war which was meant to ‘liberate’ people.

This toll includes 2,401 US military deaths, 3,937 contractor deaths, 58,596 Afghan military and police deaths, 1,141 allied military dead, and (a conservative estimate) 38,480 civilians killed. The number of wounded across all sides – both mentally and physically – is difficult to pin down.

These figures don’t include the scores of Afghans killed and wounded at Kabul airport yesterday on 26 August. Nor the reported 13 US troops who died in the attack claimed by the local branch of ISIS.

BREAKING: A British defence source said it is “highly likely” Islamic State Khorasan (ISIS-K) was responsible for the attacks outside Kabul airport.

Drones became a signature weapon of the War on Terror and were widely used in Afghanistan. Due to the secretive nature of their use, figures are hard to pin down. But The Bureau of Investigative Journalism (TBIJ) maintains a database to map and count deaths and strikes fairly accurately.

TBIJ projects that between 2015 and today over 13,000 strikes have been carried out in Afghanistan. These resulted in between 4,126 and 10,076 deaths over that period. Drones, however, have been in use for much longer. I can recall as a young soldier posted to Kandahar Airfield in 2006, missile-laden Predator drones taking off and landing were a daily sight.

Reports on the reality of the drone war, and its innocent victims, are widely available.

The air war was another big part of the Afghan war – distinct from the drone war. As foreign troops drew down in recent years, bombing intensified in support of Afghan military operations. For instance, as reporter Azmat Khan told Democracy Now:

the United States was bombing heavily parts of that country where there were fights against the Taliban raging. So, just to give some context, in 2019, the United States dropped more bombs in Afghanistan than in any previous year of the war. So, I think it was something close to — more than 6,200 bombs that year, as they were trying to negotiate.

The use of air power, she pointed out, boosted recruitment for the Taliban:

You know, many of its more recent recruits were people who did lose loved ones and really wanted revenge for those casualties.

Night raids on Afghan homes were another key feature of the war. These involved special forces descending on Afghan’s houses at night, supposedly in search of terrorists. These became highly controversial. In fact, former Afghan president Hamid Karzai’s own cousin was killed in a raid.

Later this role was handed to CIA-controlled Afghan death squads known as Zero Units. In 2020, I went back to Afghanistan to report on them. We met families whose relatives had been murdered in their homes. Another community was attacked in a night raid resulting in several deaths. This included a young boy whose father dug his body from the rubble of a mosque days later.

There is no doubt that the working class soldiers in Kabul airport want to help the kids there. And clearly puppies and kitten have enormous appeal for the British public. But there’s a danger that these images skew our idea of what the Afghan war was actually about. The real story of the conflict is not one of rescuing kids and dogs. It’s one of twenty years of imperial violence and failure in a war that never needed to be fought.