If you live with ME, long Covid, or other chronic illness, it's time to fight back - Canary 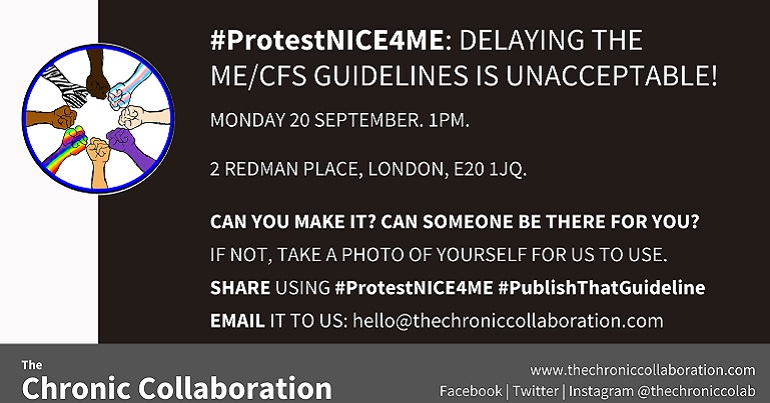 There’s been scandal in recent weeks over the National Institute for Health and Care Excellence (NICE) delaying the publication of guidelines for the treatment of people living with myalgic encephalomyelitis (ME). This kind of abuse is nothing new in the chronic illness and disabled communities. So, a new campaign group aims to tackle this systemic problem with direct political action – starting on 20 September outside NICE’s front door.  And here’s why chronic illness is a totally political issue.

Myself and my partner Nicola Jeffery have launched the Chronic Collaboration (website coming soon). It’s a new campaign group – check out its Twitter here. As we stated on Twitter, it aims to be:

It’s early days yet. But through lived experience of chronic illness and learned approaches from other types of activism, we aim to change the way our community fights for its rights. First in our sights is NICE delaying the guidelines.

NICE has caused anger and distress across the ME community. In short, there appears to be a problem over a contentious treatment for ME. It seems that some medical professionals who support a controversial style of treatment have objected to NICE removing it from its new guidelines. That treatment is called graded exercise therapy (GET). You can read The Canary‘s full report on the delay of the ME guidelines here.

GET is at the centre of this story. It’s where doctors tell people living with ME to do gradual increases in exercise to improve their condition, but it’s been marred by controversy. It was based on the PACE trial, which was a clinical study into ME that the Lancet published in 2011. It said GET and cognitive behavioural therapy (CBT) worked as treatments for ME. But its findings have been widely disputed. Many patients and doctors have said that both treatments are potentially harmful or did not improve people’s conditions. You can read more about GET, CBT, and the PACE trial here.

“The tail wagging the dog”

So, as Sian Leary wrote for Disability Rights UK:

just a few hours before it was due, the NICE Executive put out a statement saying they needed to “pause” publication. It became apparent that two Royal Colleges (the membership organisations for UK health professionals) were opposing implementation of the new guideline. They believe that graded exercise therapy should be recommended in the guideline, despite the committee’s thorough review of the evidence. …

Why are NICE allowing the Royal Colleges to have this sway when they have completed their own full, systematic review? It is the tail wagging the dog.

Part of the problem surrounding the PACE trial and ME is arrogant doctors thinking that they know better than anyone else and being unable to admit they were wrong.

But this is only one aspect of it. Because the story is ultimately a political one. And if you think it isn’t, then you really need to think again.

For example, one prominent ME doctor reported the PACE trial authors to the regulatory body, accusing them of “scientific and financial fraud”. An MP said it was potentially one of the “biggest medical scandals of the 21st century”. Some of the trial’s authors had conflicts of interest with private insurance companies. The UK social security body the Department for Work and Pensions (DWP) part-funded the trial. This led one MP to say:

One wonders why the DWP would fund such a trial, unless of course it was seen as a way of removing people on long-term benefits and reducing the welfare bill.

PACE trial’s science was so bad that some university lecturers teach it as an example of how not to conduct research. Yet its approach has infested other areas of medicine. As I previously wrote, the NHS says that doctors should treat numerous (sometimes genetic) illnesses and conditions with CBT and exercise therapy. Now, doctors are also subjecting people with long Covid to PACE trial-style treatment. The common theme? Most of these illnesses (and ME) have no recognised cure. So, the NHS lumps everyone in together and offers exercise and CBT.

Much of the corporate media also toes the line over the PACE trial. As I previously wrote, PR organisation the Science Media Centre (SMC) is central to UK press coverage of ME. It issues statements in response to medical research. But it also ‘seeds’ (plants) stories in the media (including the BBC). It has a network of journalists it works with. Major corporate media outlets also fund it. So, from articles defending the PACE trial authors to supporting its findings, the SMC and the corporate media often work hand-in-glove.

All these are examples of ‘how’ ME and PACE trial are political issues. But why?

For me, the story has various parts. You can read more about them via the links below:

So, ME and PACE trial are political issues. And political problems need political approaches.

The time for just doing petitions and letter-writing is over. Given that NICE has seemingly bowed down to the vested interests of the system, what’s been done before this point clearly hasn’t worked. The situation is similar in the US, where ME advocacy groups have been petitioning and letter-writing to the Centers for Disease Control and Prevention (CDC) over it’s views on the PACE trial – and it did little, if nothing, to change the CDC’s mind.

So, the approach to NICE – and the scandal of ME and chronic illness more broadly – needs to be more like the direct action carried out by other groups like Disabled People Against Cuts (DPAC), Extinction Rebellion, and so on. Being ‘nice’, for want of a better phrase, has so far not worked. Disruption is needed. Change has seldom been won by writing letters and signing petitions.

That’s partly why we’ve formed the Chronic Collaboration; it’s also going to be about more than this, but that will follow.

On 20 September, we and our allies will be protesting outside NICE HQ in Stratford, East London. Note the use of the word ‘protest’. This is not a vigil where we’ll be having a minute’s silence or reading poetry. This is a demo to make it very clear to NICE the physical and emotional hurt, distress, and anger it has caused chronically ill people. 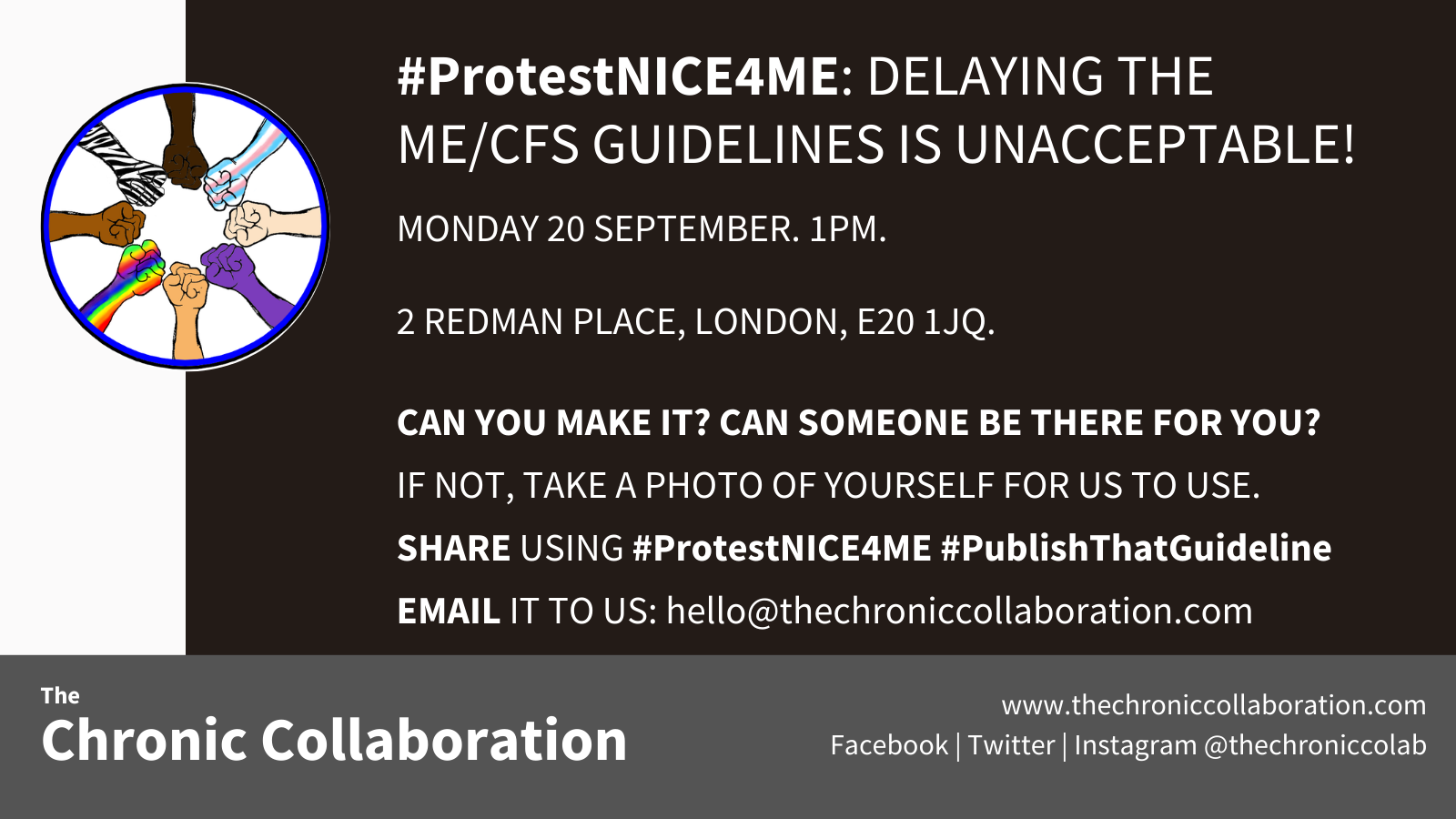 More details will be announced soon.

But of course, people living with ME and other chronic illnesses often can’t protest in person. If you can’t attend, and someone can’t attend on your behalf, we still want to see you there. Email a picture of yourself to hello(at)thechroniccollaboration.com and we’ll make sure NICE sees your face.

The community needs allies. This is why we want as many people to support this as possible: from NHS workers to other chronically ill and disabled people via non-disabled campaign groups, MPs, and well-wishers. Chronic illness doesn’t discriminate (even if the system does). With the emergence of long Covid, more and more people are affected. It could be you next – or someone you know and love.

Moreover, the abuse of people living with ME and other chronic illnesses sums up the problems with the system: where an elite few have power over the rest of us – ultimately to all of our detriment.

So, we ask you to join us on 20 September at 1pm outside NICE HQ. Enough really is enough. Let the fightback against the PACE trail – and the system’s treatment of chronically ill people – begin now.

Featured image via the Chronic Collaboration