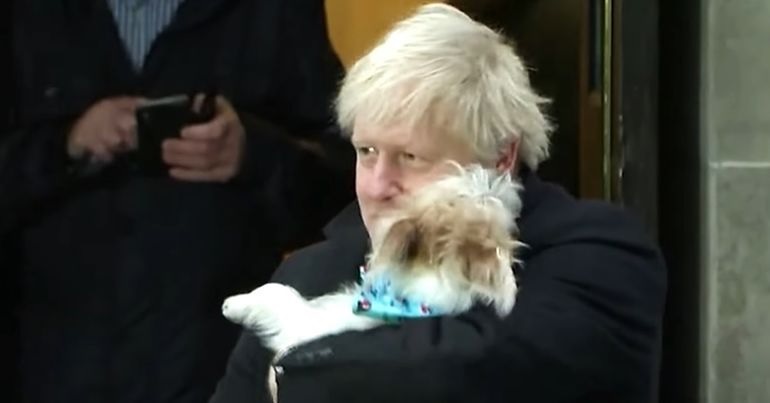 Boris Johnson’s government has tried hard to cultivate an image of being an animal welfare champion. The writing has long been on the wall that this not, in fact, the case. Johnson’s disdain towards “newt-counting”, i.e. protections for wildlife, and his government’s wholesale slaughter of badgers, to name but two examples, have shown what a load of tosh this champion facade is.

Now a huge Tory PR disaster has truly left the idea that Johnson’s government can be trusted to look out for the welfare of non-human animals dead in the water.

As The Canary previously reported, thousands of people recently called on the government to cancel its planning killing of an alpaca called Geronimo. The alpaca farmer and veterinary nurse Helen McDonald brought Geronimo to the UK from New Zealand in 2017 and upon arrival he had tests that suggested he had TB. Prior tests in New Zealand showed he didn’t have the disease, however, and the UK tests he had apparently aren’t “validated” for alpacas.

In short, many people, including the conservationist Chris Packham and ex-Badger Trust CEO Dominic Dyer, suspected that the UK’s flawed TB testing regime had wrongly put a target on Geronimo’s back and called on the government for a rethink.

The government didn’t heed their call though. Instead, the Department for Environment, Food and Rural Affairs (Defra) sent a team of people in heavily protected gear, heavily protected themselves by police, to McDonald’s farm on 31 August. They then proceeded to chase Geronimo around a field, tie a rope around his head and drag him to a van to take him away for slaughter.

Geronimo the alpaca is taken away by DEFRA officials this morning. @SWNS #geronimo #alpaca #defra pic.twitter.com/Q3gsHSyxTz

These were the final moments Geronimo had alive. Panicked and stressed. Dragged to his death. Absolutely disgusting and very badly handled by @DefraGovUK. Don't let this image be forgotten. pic.twitter.com/RV2c0s44et

As Dyer pointed out, the sorry exercise was also a PR disaster for the government:

Meanwhile, Packham argued that the appalling events showed how “out of control, arrogant and unaccountable” Defra is:

.@DefraGovUK are out of control, arrogant and unaccountable– beyond reach of science & beholden to powerful lobbyists who have infiltrated & crippled their duty to taxpayers & presided over the greatest animal welfare PR disaster in living memory.

That arrogance was further illustrated, he pointed out, by the department’s decision not to allow an independent observer at Geronimo’s post mortem examination:

This from @DefraGovUK Citing Covid and security reasons are appallingly weak excuses to block an independent observer . This is an immensely arrogant and blatant continuation of their mission to conceal their processes and act without transparency or fairness pic.twitter.com/uq5fUfSySU

Defra’s refusal to allow an independent observer at the post mortem is particularly troubling as its results will determine whether Geronimo actually had TB or not:

If #Geronimo is killed and tests negative for TB on post-mortem, it will be an immense embarrassment for @DefraGovUK – which has long refused permission for a third test. Heads will have to roll. @IainTime @alpacapower @ChrisGPackham https://t.co/eQZRZ5w4rm

Killing their way out of trouble

McDonald’s veterinary scientific adviser Dr Iain McGill joined a number of other leading vets recently in sharing their “grave reservations” about Geronimo’s UK test results. McGill told The Canary that Defra is “trying to kill their way out of trouble”. But he warned that the tactic is “not going to work this time”. McGill said that executing Geronimo:

in the full glare of the world’s media will have serious repercussions for Defra officials involved in signing off on that decision.

There were extreme animal welfare issues, with distressed vocalisations and shrieking by Geronimo, a sustained pursuit around the paddock by multiple police officers and Defra staff, followed by him being dragged on a rope towards his final tethering alone and scared in a horse box.

McGill has been working on the Operation Ark mission to fly Nowzad sanctuary staff and its rescue animals from Afghanistan to the UK. He said:

Defra and APHA [Animal and Plant Health Agency] have been superb in helping us with that, and yet another part of Defra went behind my back and slaughtered Geronimo whilst I am focused on this humanitarian mission

A whole heap of trouble

The veterinarian told The Canary that there are already disciplinary proceedings on their way against Defra officials. He also said he wouldn’t be surprised if criminal proceedings followed either.

What’s for certain is that Defra’s decision to, in McGill’s words, place Geronimo “on trial on the flimsiest of evidence” and kill him “as a mere suspect”, isn’t going to eliminate scrutiny of the UK’s flawed TB policy. On the contrary, it’s merely succeeded in drawing more attention to it.