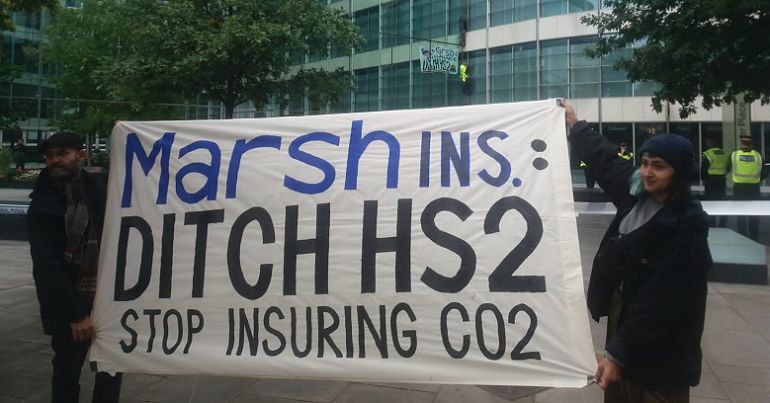 On the morning of 2 September, anti-HS2 protesters attempted to occupy two buildings in the City of London belonging to insurance company Marsh. They were protesting Marsh’s role of insuring sub-contractors on the HS2 project. The campaign group said four people were arrested at the end of the protest.

It said today’s protest is part of its ongoing ‘Impossible Rebellion’. This has seen progressive groups join forces to protest against corporate outfits “funding and profiting from the climate, ecological and biodiversity crisis.”

A spokesperson for HS2 Rebellion said:

We are here today to draw attention to Marsh’s contribution to the Climate Emergency. We demand that Marsh stop insuring HS2 subcontractors.

We also call on the government to launch an inquiry into Lord Berkeley’s recent allegation that HS2 received Royal Assent only because ministers broke the Ministerial Code and misled parliament multiple times over HS2’s true cost.

“For as long as necessary”

I have campaigned for most of my life through legal means to raise awareness of the impending ecological collapse that is now upon us due to habitat loss, pesticides and climate change. Now that collapse is upon us I feel that I have nothing left to lose. So I am rebelling. Hoping against hope that those causing the most damage will finally listen and change their ways.

She attempted to occupy a Marsh office in the City of London. Walters added:

HS2 is the most destructive scheme in Europe. £230Billion of our taxes is being used to destroy our countryside, homes, businesses, 108 ancient woodlands and threaten the drinking water of 3.2million Londoners.

She said she’s prepared to occupy the roof “for as long as necessary“. Fellow protester Scot Brean added:

Last month the IPCC report made clear that we have at most 4 years in which to turn around our carbon emissions. The government has committed to being carbon neutral by 2050, which is far too late. HS2 will not be completed until the 2040s and by its own figures will never be carbon neutral in its 120-year lifespan!

Another campaigner, Anthony Whitehouse, said he considers the “Climate and Ecological Emergency a form of genocide”.

Marsh claims projects such as HS2 “offer the construction industry an abundance of opportunities”. According to anti-HS2 campaigners, Marsh sees the HS2 project as “another opportunity to profit”.

Campaigners say this kind of exploitation of our environment is unsustainable and they believe:

The Canary contacted Marsh for comment, we had not received a reply by the time of publication.

A call for an investigation

According to Emma Guy of The Canary investigative unit, the Cabinet Office ignored a request by a member of the House of Lords to investigate a minister, a civil servant, and the chair of HS2 LTD over allegations they misled parliament and broke codes of civil service.

The Cabinet Office told The Canary it isn’t investigating allegations that ministers broke the ministerial code through misleading parliament over the budget of HS2, which could cost as much a £142.02bn.

The UK declared a Climate Emergency in 2019. But following the recent publication of a report by the Intergovernmental Panel on Climate Change (IPCC), a UN climate chief said the world “listened, but did not hear” the extent of the dangers of the climate crisis.

demanding the UK’s government and financial institutions Stop Funding Fossil Fuels Immediately. Failure to do this, campaigners and their lawyers claim, would mean breaking international law.

Featured image with the permission of Adamacio