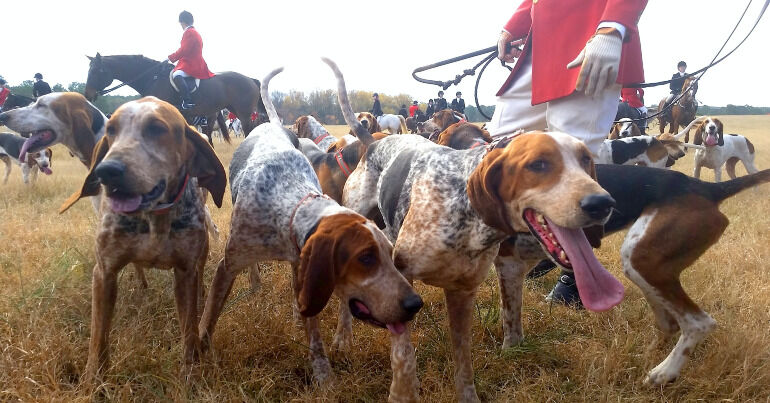 Brutal footage appeared on ITV News on 8 October showing dogs being murdered by fox hunters. The hounds belonged to the Duke of Beaufort’s Hunt, and were shot dead in cold blood. The footage was filmed covertly over eight weeks by the Hunt Investigation Team (HIT), who had accessed the Beaufort Hunt’s kennels under the cover of darkness and installed a network of covert cameras.

Keep The Ban, which supported the HIT in its investigation, said:

Two of the hounds are shot twice after appearing to show signs of life. One can only imagine the pain and suffering endured by these poor dogs. The four hounds are then individually chucked onto a wheelbarrow before being carted away as if nothing more than rubbish.

“She tried her hardest to get away from her executioner”

The HIT described the murder of one of the dogs, who was just a youngster when she was murdered. The undercover investigators named her Scamp because of her playful nature. They said:

Scamp was presumably drugged to keep her still and docile while they killed her, due to her habit of running off to play. Even while drugged she tried her hardest to get away from her executioner, before her legs gave out and she fell to the ground. She tried again, made her way to the gate, tried to get back to the safety of her pack. But there was no escape.

The Canary spoke to the Hunt Saboteurs Association (HSA). Saboteurs are activists on the ground, monitoring hunts and trying to stop illegal activity. They have known for a long time that hunts murder their hounds. Lee Moon told us:

It’s great that this awful footage has received national media attention. Killing of hounds by hunts is commonplace and this is more proof, if any were needed, that hunts see animals as a cheap commodity, to be discarded when of no further use.

Decades of proof that they abuse and murder hounds

It’s not the first time that Hunts have been caught out, brutalising and murdering the very hounds they claim to love. Back in 1996, the League Against Cruel Sports filmed the devastating murder of a hound by a Cheshire Foxhounds kennelman. In 2000, the pro-hunting Countryside Alliance admitted that 3,000 hounds would be “removed” that season. But as Glen Back reported in the Citro, the actual number of dogs murdered each season is likely to be much higher.

Keep The Ban explains that:

Hounds are the other victims of fox hunting. They have been trained to hunt and kill foxes which is not their natural instinct. If a hound is not deemed savage enough the hunt will remove it from the pack and kill it. It is estimated that thousands of hounds are unnecessarily killed by hunts every year and very few make it past the age of five or six despite having a life expectancy of around fourteen. The Countryside Alliance admit that up to 3,000 hounds are killed each year, but we estimate the figure to be closer to 7,000.

repeatedly [beating] the hound on the head with the hard end of the whip in a frenzied manner.

Smith allegedly went on to advise someone to hit hounds as hard as possible with a shovel.

Yes, fox hunting is still illegal, but they get away with it anyway

Hunting foxes with hounds is illegal in the UK. Instead, packs are supposed to ‘trail hunt’. Trail hunting involves laying an artificial trail for the hounds to chase rather than a real fox. But as The Canary has extensively reported, hunts across the country continue to get away with hunting and murdering foxes without being held accountable. Campaigners and hunt saboteurs have documented numerous acts of illegal fox hunting since the hunting ban came into force. The Duke of Beaufort Hunt – whose huntsmen were filmed murdering the hounds – is one of the worst culprits. Last year, the League Against Cruel Sports reported that the Duke of Beaufort Hunt:

topped the hall of shame as the hunt across England and Wales with the highest number of suspected illegal hunting incidents with 21 cases.

Meanwhile, in November 2020, a series of leaked webinars allegedly exposed ways that hunts in the UK cover up illegal fox hunting. In one video, senior hunt official Mark Hankinson said that trail hunting is used as a smokescreen “to portray to the people watching that you’re going about legitimate business”.

As a consequence, major landowners including the National Trust temporarily suspended trail hunting on their land.

Hankinson is currently on trial, accused of “encouraging hunts to commit illegal hunting”. The verdict is due to be delivered on 15 October.

“One more nail in the coffin”

Following the leaked webinars, the withdrawal of licenses by landowners, Mark Hankinson’s trial and the Quorn breaching lockdown [where Quorn hunt masters were suspended for allegedly hunting during lockdown], this is just one more nail in hunting’s coffin. Public opinion is ever more turning against them, as it becomes more and more transparent what cruel people they are.

It remains to be seen whether hunts will continue to get away with murder, both of foxes and of hounds. As more and more damning evidence becomes public, it will become difficult for the Tory elite to continue to protect their own. Hankinson’s court verdict will be indicative of whether the tide is finally turning on the rich and their murderous hobby.