As the Tories Americanise the NHS, we all need to be yelling ‘stop’ - Canary 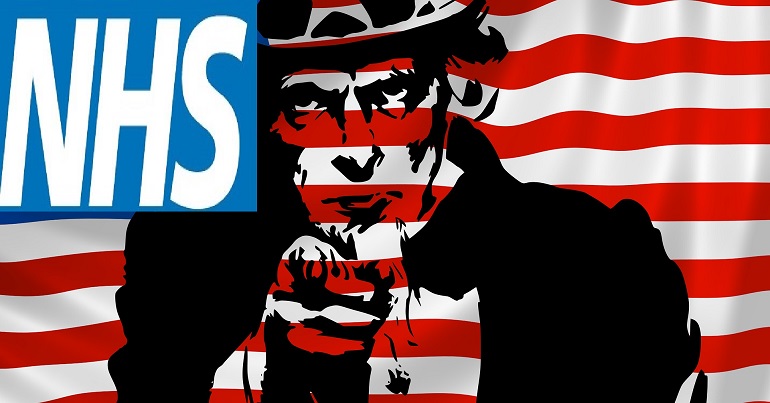 The NHS has been repurposed from a public service to something for profit extraction. And all the changes we have seen have just been about liberating up these potential assets for the corporate raiders to take them over.

This is a stark warning about attacks on the NHS by capitalists. Yet the campaign to save the NHS, relative to the destruction that could be on the way, doesn’t appear to reflect that. I say this not to knock the excellent work of tireless campaigners around the country, but to remind people of how serious this current assault on the NHS is.

Capitalists have waged a war on the NHS for decades, and they appear to be winning. So now, as the Tories’ Health and Care Bill powers its way through the Houses of Parliament, we need to wage a war to save the publicly run health service that was once the envy of the world. Because should the profit-driven capitalists get their way, the NHS could become little more than a mirror image of the dystopian US healthcare system. A system that’s dominated by profit-driven health insurance corporations and run at the expense of sick, injured and disabled people.

The people who really care deeply about our health service are sounding the alarm bells. They believe this bill spells the end of the NHS as we know it. And it’ll be a “legislative lock-in for the changes already embedded throughout the NHS”. It will also cost people more while delivering less. This bill, if it becomes law, will consolidate a privatisation agenda as they sell off parts of the NHS to the highest bidder.

Successive UK governments, in full public view, have enacted this. Yet it feels as if there’s an absence of outrage. Why aren’t we all yelling ‘stop’ with the ferocity this deserves? How is it that a local campaign to save a local hospital can get 25,000 people on the street, but a national campaign can’t do something comparable?

Given the cut-throat capitalistic policies of successive Tory and neo-liberal Blairite governments, attacks on a valuable and free public service aren’t at all surprising.

Let’s take a look at this stealthy path towards NHS privatisation, culminating in this damaging bill which is currently in the House of Lords.

Nye Bevan, the Labour minister credited with founding the NHS, famously said “the NHS will last as long as there are folk left with the faith to fight for it”. The NHS faced opposition before it even started in 1948. And Bevan himself admitted he only got doctors and its trade union, the British Medical Association (BMA), on board by “stuffing their mouths with gold”.

The NHS has been under attack since that time. In fact, Bevan resigned just three years after its founding over the introduction of dental and spectacle charges.

From there, one of the first organised attacks on the NHS started with Arthur Seldon. Seldon was a Thatcherite and once adviser to “cross-party” think tank Demos. He wrote the book After the N.H.S.: Reflections on the Development of Private Health Insurance in Britain in the 1970s. Seldon, as well as others at the right-wing Institute of Economic Affairs (IEA) think tank, put forward in a report “the advantages of user payments and private medical insurance instead of the NHS”.

Furthermore, Thatcher targeted the health service for privatisation when she came to power in 1979. Documents from 1977, before Thatcher took power, show they were already planning to privatise key public services.

Thatcher hands it over

Following the Thatcher and John Major years, the Blair and Brown regime took up the mantle. During their time, according to director Ken Loach, they increased NHS privatisation and also outsourced medical and cleaning services. In his documentary The Great NHS Heist, Gill laid out the timeline of NHS privatisation from the early 1980s until 2014: 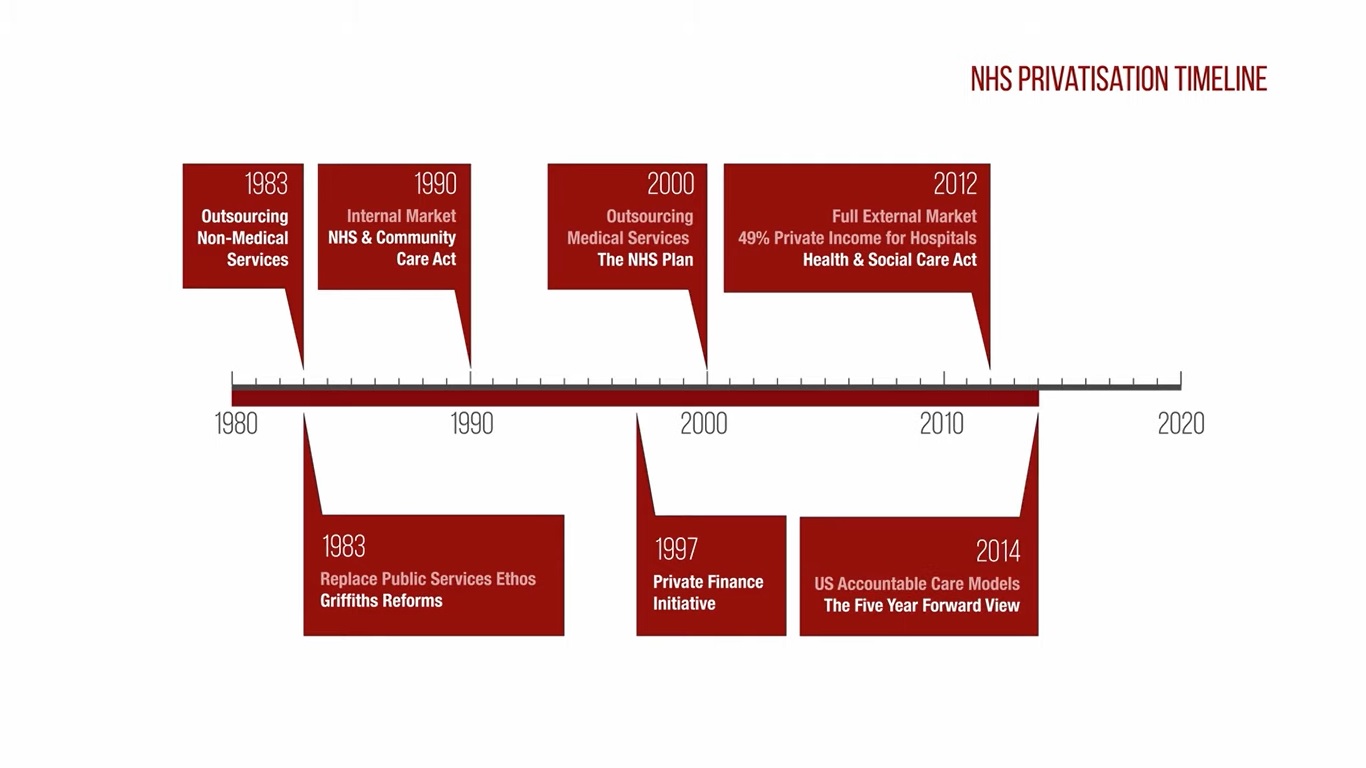 Gill says “the number of beds per head of population, has more than halved since the 1970s”. When Gill spoke to The Canary in July 2021, he explained:

We have the lowest bed capacity per head of population compared to all other OECD countries of similar economic status. We have the fewest number of doctors per head in Europe. And by the time we entered the pandemic, we’d suffered a historic freeze of annual increase in the budget of around 1% on average over the decade, where since 1948 it’s averaged about 4%.

As shown in the figure above, the Health and Social Care Act became law in 2012. According to Gill, it then became a:

defunded, repurposed, marketised NHS with a huge hole in the workforce – 10,000 vacancies in doctors, 40,000 nurse vacancies – and then we were hit with a pandemic. So this was a disaster waiting to happen.

According to Gill, one of the biggest changes proposed in this latest bill is the creation of Integrated Care Systems (ICS). But instead of integrating or improving healthcare, as its name suggests, these ICSs will integrate and be:

based on the US Medicare, Medicaid system – which is dominated by big private insurance companies like United Health, the world’s biggest private insurer – where the government, the taxpayer, puts in the money, but the management of that money is with a private insurer. And they are allowed to make profit… out of the ICS budget.

Gill also explained that the “terminology is deceptive”. Because it’s not about integrating the clinical services for improvement, but about “integrating the budgets”:

to pull over social care budgets… into NHS budgets over time, and all primary care and secondary care budgets, and give responsibility for control of all that money to an arms length new public-private entity called an integrated care board.

Now this integrated care board, on the board will be sitting all the private corporations that have been awarded outsourcing contracts over the years. And what most people are unaware of, is that this legislation is making legal what has been going on behind the scenes very quietly for over a decade. Which is, corporations such as the big four accountancy firms, the management consultancies like McKinseys, the outsourcing giants like Serco, they have all been at the heart of the backroom function of the NHS…

So they’ve already been in place, this is not some hypothetical threat, the corporations are embedded within the NHS, and what the creation of the new legal entity will do is formally transfer power from government… to this new public-private entity. So that’s a massive step.

In Consortium News last December, Gill and public policy analyst Stewart Player warned of creeping “Americanization of the NHS” and “the penetration of the healthcare system by the giant U.S. insurer UnitedHealth”. They believe the current bill, with its 42 regional-scale ICSs, is proof of this. And they believe it’s being:

effectively designed and fast-tracked by the private UnitedHealth.

As Gill told The Canary, the Blair years also saw the private sector being allowed “to saddle the NHS estate, land, and buildings with PFI debt”. PFI uses private money to build public infrastructure such as hospitals or schools. These are then leased to the government but owned by the private institution. It was actually introduced by the Tories, but Blair’s Labour drove it forward with enthusiasm.

Gill told us this saddling of debt can:

then be used as an excuse to flog off land

also handed over ownership to the private sector. So you had the assets being privatised.

In 2010, PFI investor David Metter received dividends of £8.6m. He had a stake in 19 hospitals. In 2013, BBC’s Panorama likened overall PFI programme to a credit card, because:

they buy now, we all pay later

In 2018, the chairman of the Royal Bank of Scotland said PFI was a “fraud on the people”. And the Independent reported the PFI bill for NHS hospitals was projected to be above £79bn. A considerably high price on its own, but significantly higher than the build cost of £11.4bn.

In 2019, the Institute for Public Policy Research (IPPR) found that £13bn invested by the private sector in new hospitals would cost the NHS in England £80bn. Some trusts spent one-sixth of their budget repaying debts because of PFI.

But there’s still time to save the NHS

Large as the Tory majority is, Boris Johnson – assuming he survives much longer – certainly doesn’t have the loyalty of his ranks. And if public pressure is brought to bear, it could once again force change. Tory MPs or House of Lords members could possibly rebel if they believed there was significant public opposition to this bill, or indeed if they believed their own position was under threat.

There’s so much we need to defend at present. It’s essential the NHS is part of that, and that every individual plays their part. The campaign to stop this assault on our health needs to be as loud as the campaigns for our planet’s survival and the campaigns that stand up for our civil and human rights. It’s really is that important.

Because if we all don’t stand up now, what we know and cherish most about our health service could very well be a distant memory. A mirror image of the US’s profit-driven ‘healthcare’ system.