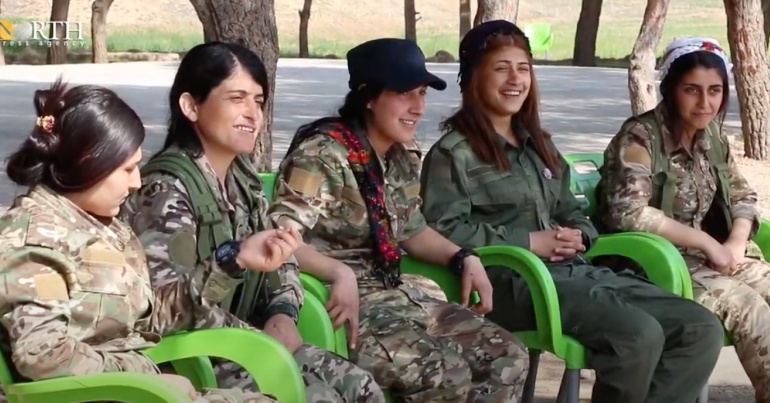 Tomorrow is International Women’s Day. It’s 2022. Yet we’re still a long way from women’s emancipation. And the war in Ukraine has amplified this more than ever. Because when it comes to war, women are infantilised. Our ability to defend ourselves is equated with the vulnerability of children.

But even worse, this is done without hesitation or critique.

In the mainstream media, story after story reflects the ‘women and children first’ narrative. Whether it’s reporting on people leaving the country or bomb attacks, women are put in the same breath as children.

This has been exasperated by Ukrainian president Volodymyr Zelenskyy banning men from leaving the country. In the rush to put Zelenskyy on a pedestal, there’s been little criticism of this frankly obscene mandate. No one, ever, should be forced to fight on behalf of any state or organisation. But even setting this fact aside, there’s been a general acceptance that Zelenskyy’s priorities are right.

It’s 2022. But a woman’s role as a mother and victim is still enforced in nearly every news bulletin reporting on casualties or refugees. There is no dialogue around fathers leaving with children while their mothers stay and fight. Surely, by now, we should have reached the stage where the message is ‘parents and children first’?

And that’s not to say that powerful women aren’t represented in the conflict. Whether that’s BBC journalists Lyse Doucet and Orla Guerin reporting from the conflict, or women Ukrainian MPs such as Kira Rudik staying to fight, women’s strength is, to some degree, represented:

Our #women are going to fight as hard as our #men.
Because bullets don't really care which hands are firing them. And bravery has no gender.@TheSun https://t.co/zn9qFNz2C9

Rudik is right, “bravery has no gender” (though the Sun sexualising women fighters is a whole other article). But when news bulletin after bulletin repeats the ‘women and children’ mantra, this message is undermined. It shows that we’re still stuck in the mindset of female vulnerability.

Our past and our present is full of women fighters. But with the exception of Boudicca and possibly Joan of Arc, it’s unlikely many of us encountered them in our history lessons. In more recent history, women have fought on the frontline in the Mexican revolution, the Spanish Civil War, the Sri Lankan civil war, and the French Revolution, to name just a few examples.

However, in recent years, it’s the women of the YPJ (women’s protection units) in Rojava (north east Syria) who’ve shown the power of women fighters. And the Kurdish Freedom Movement more generally has shown the power of a movement for direct democracy that places women’s liberation as one of its central tenets.

Women are disproportionately affected by war, especially through gender-based sexual violence. But this should make their role in conflict even more vital. The YPJ, for example, focuses on education as much as combat. As YPJ commander Zanarin Qamishlo described in 2021:

the Women’s Protection Units had an impact, both from the military point of view and how to develop it to protect the people or from the social side, and how to influence the authoritarian masculine mentality to change it and push it towards justice and equality, and how for women to become a strong and beneficial will that can break the shackles of outdated customs and traditions.

It changed the stereotyped image of women’s military organizations, as the female fighters presented battles to liberate cities and villages from ISIS mercenaries, took up arms, and not only fought the enemies, but fought the male mentality that permeates the details of life.

Celebrating women’s role in combat does not and should not mean glorifying war. It’s not about saying everyone or anyone can or should fight. But there are times when fighting back is necessary, and it’s about time we all recognised that women are just as capable on the frontline as men.

As women, we need to reclaim our history and our present as warrior women. Generations of white men have tried to teach us that women don’t fight; that our role is in the home or dressing wounds. History tells a different story.

So this International Women’s Day, let’s reclaim our history and our power. Let’s stop using the phrase ‘women and children’ to depict vulnerability. The patriarchy has spent generations telling us we’re weak. It’s time to fight back.