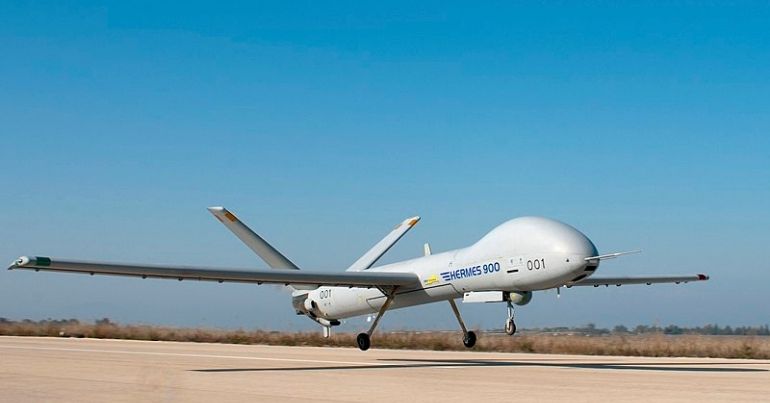 The UK Ministry of Defence (MOD) is no stranger to a bad idea. Nobody who has spent more than five minutes in or round the UK military would deny it. The MOD’s latest project is a ‘green’ drone. In itself, this is a symptom of a broader global push towards ‘sustainable’ brands of warfare. This increasingly sees national militaries, and their worldviews, being used to grapple with an issue which has no military solution. Being oppressed or killed by green military equipment, let’s be honest, is hardly different from being oppressed or killed by the usual hardware.

So what’s the story?

In their quest for some good green optics, the MOD have enlisted none other than Elbit Systems. Yes, the firm which supplies 85 percent of Israel’s drones. The same Elbit Systems whose London HQ was blockaded by anti-arms-trade activists just days ago. Elbit’s latest offering: the Sustainable Aviation Pathfinder. Alongside their partner, global defence contractor KBR, Elbit announced they would begin initial test flights soon:

Affinity Flying Training Services Ltd (Affinity), has embarked on a series of battery-powered flight tests for the UK Ministry of Defence to assess the feasibility of environmentally friendly alternatives to current military aircraft.

Yes, you read correctly: “environmentally friendly alternatives to current military aircraft”. War is going green, and the MOD are trying extremely hard to make this sound like a feasible idea. This seems like a good opportunity to have a look at the MOD’s record on the environment.

Scientists for Global Responsibility (SGR) have compiled data which can help the MOD. That is, if the department is really serious about the environment. For example, the MOD produced 3.2mn tonnes of CO2 equivalent (CO2e) in 2016.2017. That is 3 percent of the UK’s national CO2e.

But this does not include CO2e produced by actual warfighting or defence contractors. Indeed, the UK was a key party in the War on Terror, which SGR say produced 3000mn tonnes of CO2e between 2001 and 2017.

Let’s be clear. Recent campaigns have made the climate worse. As The Canary reported previously:

The Costs of War Project has also asserted that the enduring military actions in Afghanistan, Iraq, and Pakistan have resulted in “the degradation of the natural resources in these countries and a radical destruction of forest cover”. It said “the animal and bird populations have also been adversely affected”.

The issue is not limited to the UK military. Globally, militaries have started to position themselves as a leading force in climate politics. However, some campaigners ask what the implications of this really are. According to Nick Buxton from the Transnational Institute (TNI), we should be very cautious about letting militaries lead on climate change:

…by framing climate change as a security matter, it also has significant consequences in shaping how we respond to a warming planet. As the climate crisis unfolds, is the military the institution we want to turn to for solutions?

And as TNI point out in their climate security primer:

The fundamental problem with making climate change a security issue is that it responds to a crisis caused by systemic injustice with ‘security’ solutions, hardwired in an ideology and institutions designed to seek control and continuity.

At a time when limiting climate change and ensuring a just transition requires a radical redistribution of power and wealth, a security approach seeks to perpetuate the status quo.

Despite the green rhetoric around, for example, the new drone project, the UK’s own review suggests that the country’s leaders are unwilling to change course in order to counter climate change.

As the militarism monitor Forces Watch has it:

…the government’s recent Integrated Defence and Security Review gives a strong indication that, despite some discussion of the challenges posed by climate change, the nation state and national interest will continue to be prioritised. The new competitive age – powered by defence and security industries – envisioned by the review falls far short of facilitating the kind of cooperative approaches we need in the face of climate emergency.

As we’ve heard here, national militaries and arms firms have no solutions to the biggest security threat facing humanity. However, they are desperate to tick some ‘environmental’ boxes, whilst continuing to be major polluters.

At its core, the Elbit ‘eco-drone’ project is a gimmick. Its one which allows a morally dubious firm to tout its environmental credentials, all whilst making money, contributing to emissions, and causing harm. Because, at the end of the day, a missile fired from a ‘sustainable’ drone has the same effect as one fired from any other – at least for the people at the receiving end.