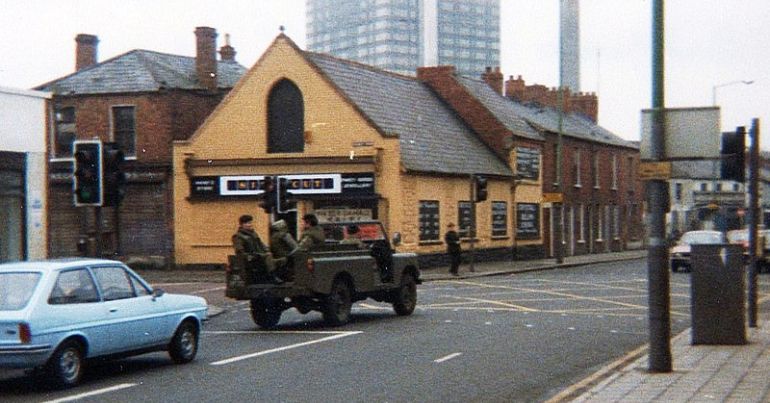 For the first time, a former British soldier has been convicted of a killing during the Troubles in the North of Ireland. A Belfast court found David Holden guilty of the 1988 manslaughter of Aidan McAnespie. The killing occurred at a checkpoint when Holden was an 18-year-old soldier. McAnespie was 23.

Holden claimed that his wet trigger finger slipped. However, the judge was withering in his comments, saying Holden had given a “deliberately false account”.

As Sky News mentioned in their tweeted clip, only six soldiers have ever been charged, with two of those cases collapsing, and another accused veteran dying before a judge could rule:

BREAKING: Former British soldier David Holden found guilty of manslaughter of Aidan McAnespie in Northern Ireland during the Troubles in 1988.@skydavidblevins has the latest.

Such a tiny numbers of cases coming before a judge are a stark contrast to the amount of coverage and outcry generated. For many years there have been right-wing cries of a witch hunt and suggestions of large-scale investigations ruining honourable men’s lives.

And yet, there has been only one single conviction.

The truth is there was no witch hunt. There is just an attempt at a basic process of justice repeatedly hindered and shouted down by the British authorities and their cronies in the press and ex-forces community.

Just this week, a step towards the permanent denial of justice and transparency has been taken in the Lords.

As the Canary reported on 24 November, the new Legacy and Reconciliation Bill has had its second reading in the Lords. The bill, if passed, would make convictions – already extremely unlikely – even more difficult. Instead, it would replace judicial processes with a committee, which are likely to be little more than a history reading group.

By offering a low-bar immunity to the perpetrators of some of the most horrific crimes imaginable it is telling them that what they did no longer matters.

This, then, is British justice in Ireland. Its implications for the families of those killed, and for stability and reconciliation in a country which has known too little of either, are as dark as the legacy of occupation itself.