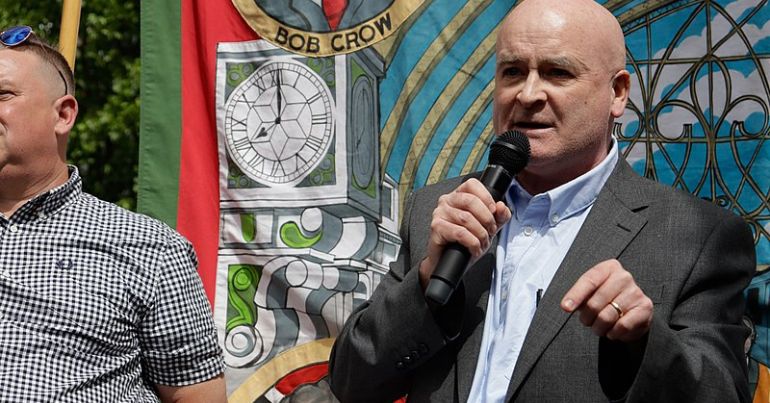 Rail, Transport and Maritime union (RMT) general secretary Mick Lynch is back on the war path. The straight-talking trade union leader did another round of the TV studios ahead of planned strikes. The results were predictable: posh, smug TV presenters left gaping.

Strikes have been set for multiple days in December and January. The Morning Star reported:

The warning came after the Rail Delivery Group, which represents train operating companies, refused “without any credible explanation to make promised written proposals” which could have ended the six-month dispute, [RMT] said on Monday.

Among Lynch’s victims was shrieking Tory rent-a-gob Richard Madeley, to whom Lynch gave both barrels after being asked if the government was simply lying:

🎤 Richard Madeley “So you’re accusing the government of a bare faced lie on this?”
🗣 @RMTunion Mick Lynch “I am, yes.”pic.twitter.com/XSeyykxwpd

One attack line being used against the workers of the RMT is that they are trying to wreck Christmas. Earlier in the week, Lynch took down a Daily Mail journalist who called him “Mick Grinch”. Lynch responded by reminding those present that the Daily Mail was deeply fond of Oswald Mosley’s fascist pro-Hitler Blackshirts, endorsing them in the 1930s:

A Daily Mail journalist asks Mick Lynch from the @RMTunion whether he's proud of being known as 'Mick Grinch'.

Elsewhere, journalist and satirist David Osland pointed out that while right-wing journalists liked to attack Lynch over his pay, they themselves weren’t doing much to justify their (much larger) salaries when they encountered him:

They say Mick Lynch is overpaid. But he routinely outclasses million pound a year television presenters.

And even BBC Question Time – supposedly a flagship debate show – let its mask slip to reveal its anti-working-class politics. In a contender for reach of the century, an audience question tried to conflate the RMT with the coronavirus (Covid-19) pandemic:

In fact, it’s notable how many media outlets follow in the footsteps of the Daily Mail when anything about workers being treated properly comes up. Fortunately, Mick Lynch was happy to point this out when one particularly inept interviewer suggested that the RMT, rather than fat cat bosses, were holding the public to ransom:

🎙️ Sky News "Are you holding the general public to ransom now?"
🗣️ Mick Lynch "No, that's just a cliche…this is worthy of the Daily Mail, which isn't very worthy at all."@RMTunion Mick Lynch counters the typical media narrative…again!!#RailStrikes pic.twitter.com/vBpEwLbVJ4

There’s few better sights than that of Mick Lynch destroying the media representatives of the boss class. We can only hope the RMT get their pay and conditions met in full for the sacrifices they are making on behalf of the public. That would be a worthy Christmas present.