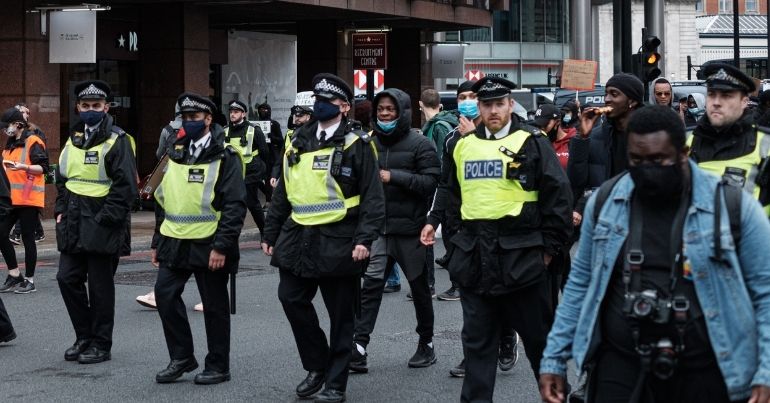 The Commons has passed the Public Order Bill, which is now with the House of Lords at committee stage. It’s probably one of the most dangerous pieces of legislation to have ever passed through parliament. Because, once it’s law, every protest in the country will be threatened with penalties more likely to be found in a authoritarian regime.

The government explains that the Public Order Bill:

builds on the public order measures in Part 3 of the Police, Crime, Sentencing and Courts Act 2022 which, amongst other things, updates the powers in the 1986 [Public Order] Act enabling the police to impose conditions on a protest, provides for a statutory offence of intentionally or recklessly causing public nuisance and increases the maximum penalty for the offence of wilful obstruction of a highway.

The government admits that the Public Order Bill is but another attempt at getting through legislation previously blocked by the upper house:

The government had originally sought to include the majority of the measures provided for in the Public Order Bill in the Police, Crime, Sentencing and Courts Bill, but the government’s amendments to that Bill were blocked by the House of Lords.

The Police, Crime, Sentencing and Courts Act (PCSC Act) became law in April. At the time, the Canary published an article summarising its key points.

They include “locking-on” and going equipped to lock-on, thus criminalising “the protest tactic of individuals attaching themselves to others, objects or buildings to cause serious disruption”. The penalty for locking-on is a maximum “of six months’ imprisonment, an unlimited fine, or both”. And “the maximum penalty for the offence of going equipped to lock-on will be an unlimited fine”.

“Tunnelling” is also criminalised. This includes “creating a tunnel, participating in creating a tunnel and being present in a tunnel”. The “maximum penalties for these offences will be 3 years imprisonment, an unlimited fine or both”. Going equipped for tunnelling is also an offence, leading up to “6-months imprisonment, an unlimited fine or both”.

The bill also extends stop and search powers. This will enable police to search for and seize “items which are made, adapted or intended to be used in connection with protest-related offences”. They include items that can be used for tunnelling or locking-on. The police may also be authorised to “conduct a stop and search without the need for suspicion”.

Even more controversially, the new legislation will reverse the presumption of innocence in certain instances. Parliament’s Joint Committee for Human Rights observed that this contravenes European Convention of Human Rights (ECHR) article 6:

By imposing an unnecessary reversal of the burden of proof they also appear to be inconsistent with the presumption of innocence and the Article 6 ECHR right to a fair trial.

Then there’s clause 6 of the bill, which criminalises any attempt to obstruct transport works. Clause 7, meanwhile, states it’s an offence to “interfere with the use or operation of key national infrastructure”.

Perhaps one of the more draconian parts of the bill concerns Serious Disruption Prevention Orders (SDPOS). These will be used to prevent people from taking part in a protest, including forcing them to wear electronic tags.

[SDPOS] may include prohibiting an individual from being in a particular place, being with particular people, having particular articles in their possession and using the internet to facilitate or encourage person to commit a protest-related offence

Netpol observed that SDPOS can be used:

to seek out and target people whom the police perceive as key organisers and to potentially ban them from attending, organising, or promoting protests seen as “disruptive to two or more individuals or to an organisation” for two years or more, even if they have never been convicted of a crime.

Furthermore, the state may decide they become guilty of a crime if they break the rules of the order in any way – or even fail to notify the police that they are staying somewhere else.

Netpol added that SDPO-imposed conditions can include:

Criticisms of the bill

In a video, journalist George Monbiot bluntly described the bill as a “tool of dictators”:

You don't protest, so you think the Public Order Bill – the most repressive legislation of the modern era – doesn't affect you?
If so, I'm sorry to say that you couldn't be more wrong.
*Please* watch this. You need to know. pic.twitter.com/xYmAUwOzZK

And Greens leader Caroline Lucas described the bill as heralding “a police state by stealth”:

Britain is becoming a police state by stealth. The draconian & deeply undemocratic #PublicOrderBill just cleared the Commons – 283 in favour, 234 against. Ironically, can only hope the unelected Lords will stand up against this dangerous & populist Govt and vote it down.

Moreover, Jeremy Corbyn said he would vote against the “draconian” bill:

Today, I’ll be voting against the Public Order Bill.

This draconian piece of legislation is an authoritarian attack on our democratic right to protest.

As the government desperately tries to quash dissent, our message is clear: we aren’t going anywhere. pic.twitter.com/DMyiaCzZwc

Unsurprisingly, provisions in the bill have been compared with civil liberties’ restrictions normally found in authoritarian regimes.

In sum, the Bill would serve to give the police carte blanche to target protesters – similar laws can be found in Russia and Belarus.

The idea that in this country, we are going to ankle tag someone who has not been convicted in a court of law… I mean, I tell you what, those Chinese in their embassy will be watching this very closely at the moment, they might actually be applying for some of this stuff when we pass it in this place as I suspect we will.

The UK government’s tougher measures against disruptive protests stands in contrast to its critical position of Beijing’s policies on Hong Kong, and the Hong Kong government’s response to the social unrest of 2019.

Amnesty International summed up the dangers presented by the proposed legislation:

Granting powers to seek sweeping injunctions against peaceful protest activity to government ministers is particularly concerning, as these powers will inevitably be used in politicised and knee-jerk ways. The government of the day will be able to pick and choose which protests it does and doesn’t approve of and seek sweeping banning orders, backed up by the prospect of hefty prison sentences, to stop them.

Elsewhere in the document, Amnesty made clear its view of the bill:

Amnesty’s assessment is that the PO Bill would leave the UK in breach of international human rights law.

Though the current government may not care a whit about that.