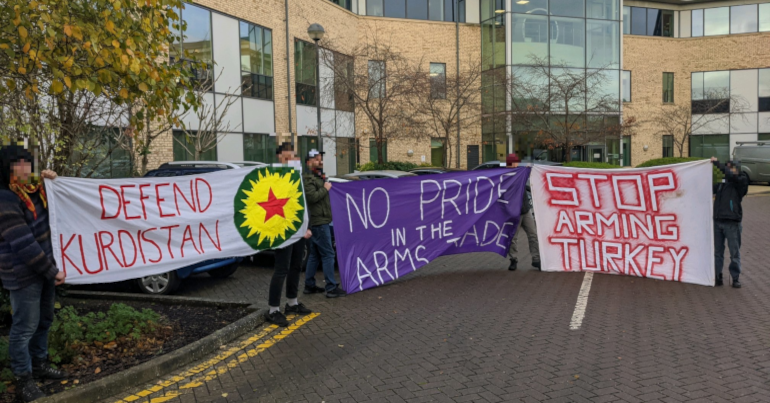 Since Saturday 19 November, Turkey has been bombing Northeast Syria and Iraqi Kurdistan. At least 64 people have already been killed, but this may only be the beginning. The Turkish state is threatening a ground invasion of Rojava.

While international coalition Rise Up 4 Rojava warned yesterday of preparations for a ground invasion:

Tukrish military are mobilizing to the border regions and occupied territories of #Rojava. There has been repeated warning by @SDF_Syria officials about the preparation of ground invasion. Here footage of a military convoy in the Kilis. #RojavaIsUnderAttack pic.twitter.com/3VeJZ5r7pO

In 2012, a revolution began in the majority-Kurdish region of Rojava in northern Syria. People organised themselves into communes, declared autonomy, and began practicing stateless direct democracy. The revolution, however, was under threat from the very beginning and has faced invasion by Daesh (Isis/Isil) and Turkey. People from all over the world have travelled to Rojava to join the revolution as internationalists

Turkey has already launched two major invasions, in 2018 and 2019, and is occupying parts of Northeast Syria.

The Turkish state is saying that its current attacks are in retaliation for a bombing in Istanbul on 13 November. It blames the bombing on groups associated with the revolution in Rojava. However, the Kurdistan Freedom Movement has denied any involvement in the bombing.

Campaigners are calling for international action against the new threat to the revolution. Rise Up 4 Rojava has released a video calling for protests against Turkish Airlines:

➡️ Come together and go to the closest airport in your region and block the turkish airline check-in’s!
➡️ Read, download and spread our call: https://t.co/i94pWoIhT5#DefendKurdistan pic.twitter.com/sfPsCorgGr

Meanwhile, the UK-based Kurdistan Solidarity Network has called on comrades to “take to the streets”:

On the Turkish military bombing of Kurdish civilians in Rojava.

Statement from internationalists in Rojava

The Canary has received a statement from a group of women internationalist supporters of the Rojava revolution. They call themselves ‘Antifa Mala Inanna’ (the house of Innana – an ancient Mesopotatamian goddess). They said:

Right now, NATO [the North Atlantic Treaty Organisation] is showing its true murderous colours. The fascist Turkish state along with its allied Nations are committing a massacre against one of the largest stateless populations in the world. Attacking civillians, journalists, hospitals; targeting directly their guns into peoples homes in small villages across North Syria and Iraq (Kurdistan).

Nation States want us to be silent, complicit and oppressed. In the west state violence is normalised or completely unreported. It is time to stop wondering whether we can make a difference or not, we can; the Kurdish Freedom Movement showed us the way with self determination and now women in Iran and Rojhelat [the part of Kurdistan within the borders of Iran] strengthen their resistance along side us too.

We are all fighting the same enemies, the same Patriarchal, Imperialist, Dominant systems. In Europe we must stand against our countries crimes against humanity, self organise, and get creative.

Civilians and a hospital targeted

In an open letter seen by the Canary, the internationalists spoke of the destruction that Turkey has caused this week inside Northeast Syria:

In Kobanê, a hospital was destroyed, a journalist from ANHA, and many civilians targeted. These are airstrikes, warplanes of which they must obtain permission for airspace from Russia and US.

The letter critiqued NATO’s silence over the attacks:

The OCHA [the United Nations office for Coordinating Humanitarian Affrairs] made a press release stating since May this year, Turkey‘s president Erdogan has been threatening a miltary incursion into Northern East Syria. NATO remains silent.

The letter’s authors commented that Turkish president Recep Tayyip Erdoĝan is up for re-election, and Turkey is in economic crisis. Erdoĝan has repeatedly used an aggressive foreign policy to bolster support at home.

Kurdish people have… experienced genocide for [centuries] by all powers that seek to colonise the land and build a capitalist nation state system. They are denied a place in this world, they are forbidden to speak their native language, they are forbidden to build co-operative communities and their women and children are raped and murdered. They are not recognised even as a country on any map, with Kurdistan spanning borders of Syria (Rojava), Turkey (Bakûr), Iran (Rojhelat) and Iraq [Başur].

Kurdish people encounter intense repression within Turkey. At least 10,000 people are currently in prison for alleged association with the Kurdish Freedom Movement. Moreover, Kurdish language education is severely repressed. Cooperatives that Kurdish people inside Turkey’s borders created to meet people’s needs have been declared illegal. And there have been multiple cases of Turkish security forces committing rape and murder with impunity.

The open letter went on to speak about the use of chemical weapons by the Turkish state, and the silence of the UK and EU:

Since April 14th 2022, Turkey has been using chemical warfare against Kurdish Freedom Guerillas in the mountains of the fertile crescent. Against these illegal weapons, they have been resisting in the same place for over seven months from the ground.

October 20th this year, videos from an independent news agency were published that showed directly the use of such weapons in Northern Iraq by the Turkish army.

This month the British parliament discussed [MPs’ calls] on EU countries to demand an investigation by the OPCW (Organisation for the Prevention of Chemical Weapons).

The European Union has turned a blind eye to these horrific events, not just currently but for years, for their own profit.

The internationalists spoke about how people have been working at a grassroots level to expose these crimes:

Internationally, young people are taking to the streets to speak out about their countries’ involvement with the slogan, [#YourSilenceKills] and [#ẀeSeeYourCrimes]. Protests in front of the European Parliament denounce the [West’s] silence.

The open letter’s authors explained why the revolution in Rojava is a threat to the Turkish state:

Rojava is internationally recognised as an autonomously organised revolution of democracy (AANES [Autonomous Administration of North and East Syria]). It is an example of collective and co-operative practice. This worldwide recognition of such success is the biggest threat to Turkey and all nation states; if this collective organising is autonomous it does not need the state to survive.

They described the current airstrikes as “anti-democratic”, “not anti-terrorist”. And they said that the Rojava revolution is in “defence of true democracy”.

The letter concluded with a call to “speak out together and stop this massacre” and called on the media worldwide to publish “these stories of crimes against humanity”.

The people resisting Turkey’s attacks in Northeast Syria and Iraqi Kurdistan deserve our solidarity. Follow the Kurdistan Solidarity Network and Rise Up 4 Rojava on Twitter for news of demonstrations and how to get involved.