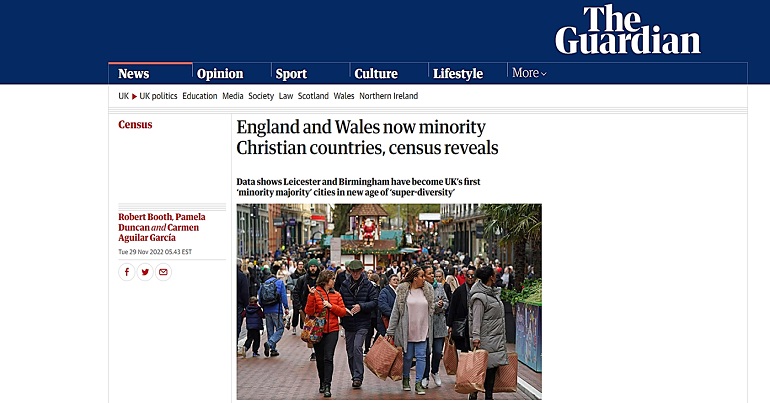 The results of the Census 2021 continue to come in. However, on Tuesday 29 November, the latest release caused gammon across the UK to collectively lose their minds – helped along by the Guardian, which then changed its article after it was published.

As Agence France-Presse (AFP) reported, for the first time, less than half of the population in England and Wales identifies as Christian. This was according to census data released Tuesday. The 10-yearly census carried out in 2021 showed ‘no religion’ was the second most common response after Christian, the Office for National Statistics (ONS) said. Data for Scotland and Northern Ireland is released separately. The ONS added the religion question to the UK census in 2001. It remains voluntary to answer, but 94% of respondents did.

Of course, the real story here is that more and more people are not religious. However, not to let the facts get in the way of an opportunity, right wingers used the Census as an opportunity to drop racist horseshit – with the Guardian aiding and abetting them.

The Guardian originally wrote that:

37.2% of people – 22.2 million – declared they had “no religion”, the second most common response after Christian. It means that over the past 20 years the proportion of people reporting no religion has soared from 14.8%.

However, the Guardian was intentionally mixing up its measurements:

"The census revealed a 5.5 million drop in the number of Christians and a 44% rise in the number of people following Islam." Absolute numbers for the first value and a percentage change for the second. Tabloid tactics, @guardian.https://t.co/UakeOjG4f7

However, the Guardian doubled down on the race-baiting with its dire takes on ethnicity figures.

AFP reported that the ONS found the number of people in England and Wales identifying their ethnic group as white had fallen by around 500,000 since 2011. This went down from from 86% to 81.7%. The proportion identifying as white and from the British Isles stood at 74.4%, down six points from 2011. However, the ONS noted that respondents could also choose from more options than in 2011, encouraging them to list other identities.

The second most common ethnic group after white was “Asian, Asian British or Asian Welsh” at 9.3%, up from 7.5% a decade ago. Within that group, most respondents identified their family heritage as Indian, followed by Pakistani, “other Asian”, Bangladeshi, and Chinese. The next largest ethnic group was the African, followed by Caribbean.

Of course, the Guardian jumped on this. It said that places where more Black and brown people lived were called “minority majorities”:

Ushering in a new age of city-wide “super diversity”, the ONS data showed 59.1% of the people of Leicester are now from ethnic minority groups, a big change since 1991, when black and minority ethnic people made up just over a quarter of the city’s residents.

The term “super diversity” is problematic for several reasons.

As professor of applied linguistics Sinfree Makoni wrote, he was:

extremely uncomfortable with the notion of diversity when used to refer to ‘mass movements’ for three main reasons. First, writing from a vantage perspective of being an immigrant in a rural university which seeks to bring to fruition diversity, I keep asking myself whether it is not the case that diversity… is a version of a description of reality that can only be advocated by those who are part of the powerful elite, such as researchers.

Second, those of us who have spent most of our professional lives outside our countries of origin find that diversity may be extremely uncomfortable, because it is typically others who do so. It is the powerful who celebrate the notion of diversity; those of us from other parts of the world feel the idea of diversity is a careful concealment of power differences…

Third, I find it disconcerting, to say the least, to have an open celebration of diversity in societies marked by violent xenophobia, such as South Africa… Furthermore, diversity stresses the differences between individuals, languages, groups, etc. Whether we are diverse or not depends on the power of the social microscope being used.

So, not only did the Guardian prop up right-wing narratives about, for example, “invasions” of refugees – it then did what the liberal media do so well, and covered its tracks by spinning it as “super diversity”. For a supposedly left-wing outlet, it does a remarkably good job of sowing the seeds of division and racism for the right wing.

Featured image via the Guardian – screengrab