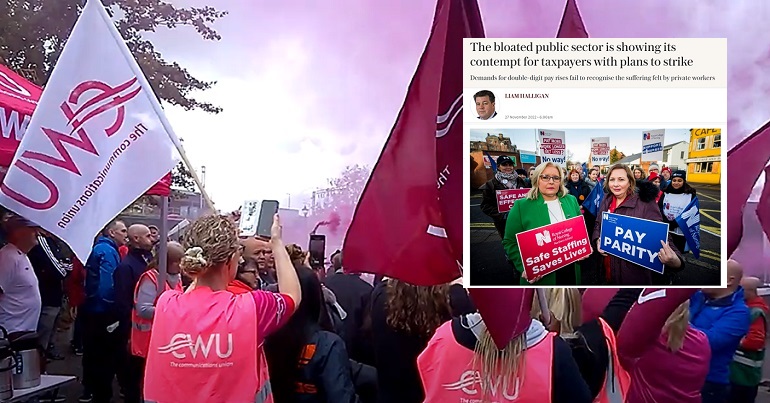 Right-wing shitrag the Telegraph ran an article on Sunday 27 November criticising NHS workers for striking. Of course, in reality it was little more than a poorly-written piece of gammon catnip with a clear pro-privatisation bias. Moreover, the article was devoid of actual facts.

Economics editor at GB News Liam Halligan wrote the hit-piece on public sector workers for the Telegraph, with a predictably divisive headline:

The article comes as various NHS workers are preparing to strike. In the piece, Halligan admitted that:

However, his overall points were that:

Halligan wrote a clear piece of propaganda, pitting worker against worker across a thinly-veiled pro-privatisation narrative:

There is nothing bloated about the public sector which is cost effectively whittled to the bone. #politicians have killed the #NHS to feather their own nests. https://t.co/2whNOZezaJ

Of course, the article was also littered with holes and mistruths – as one reader pointed out in the comments:

For example, Halligan claimed that:

public-sector workers are more likely to be highly educated professionals who command higher wages in the labour market.

So, overall Halligan’s article was a load of BS opinion pretending to be economic analysis. However, the GB News hack also missed another critical point in his hit-piece: that private sector workers are also striking.

For example, nearly all of Jacob’s Cream Crackers’ workers have recently gone on indefinite strike. As the Guardian reported, bosses have offered staff at the Aintree factory repeated real-terms pay cuts. So workers have walked out, and Jacob’s has chosen to move production of crackers to Portugal. However, crucially, the Guardian noted that:

Workers from rival biscuit maker Fox’s recently secured a 13.5% pay rise over two years after threatening strike action backed by the Unite union while those at Heinz’s condiment factory in Telford won an 11% pay rise this week.

Meanwhile, as the Canary recently reported, cleaning, catering, and housekeeping staff in the private health sector have won repeated pay rises after they protested and campaigned.

Then, two of the biggest private sector strikes Halligan failed to mention in the Telegraph were that of the Communication Workers’ Union (CWU) against Royal Mail, and the National Union of Rail, Transport and Maritime Workers (RMT) against privatised rail companies. Moreover, charity sector workers are also striking, with staff at homelessness organisation Shelter walking out over pay.

Of course, readers of the Telegraph didn’t consider this, with one person even commenting the private sector ‘can’t strike’:

Telegraph readers will digest Halligan’s very obvious divide and conquer propaganda and burst a blood vessel over the “bloated public sector”. But in reality, it doesn’t matter if workers are in the public, private, or charity sectors. Everyone is feeling the effects of the Tories’ capitalist race-to-the-bottom agenda. And no amount of poorly-written drivel from Halligan will change that.

Featured image via puffernutterlou – YouTube and the Telegraph – screengrab