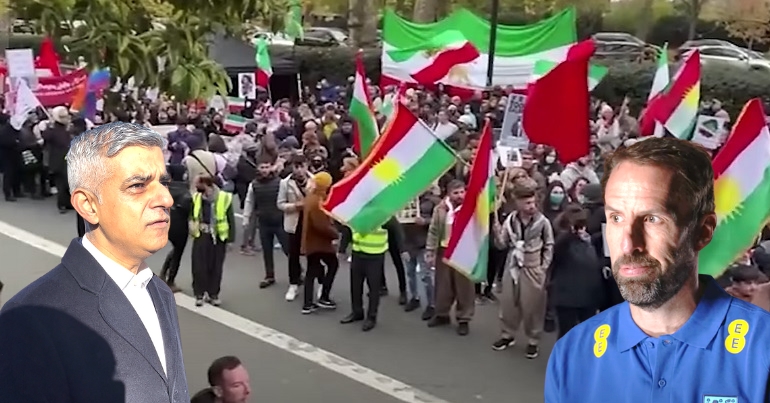 Sadiq Khan has condemned the Fédération Internationale de Football Association (FIFA) for banning footballers from wearing One Love armbands. He called FIFA “weak” in the face of pressure from World Cup host Qatar, as England heads into its second match. Meanwhile, Iranian authorities have arrested a footballer for speaking out against their killing of civilians and crackdowns on protests, all while Iranian fans continue to protest in Qatar.

England and Iran: variations on protest

As the Canary previously reported, the England players did not wear their One Love armbands in their first match of the World Cup against Iran. These armbands are designed to show footballers’ support for LGBTQIA+ people’s rights. This is currently of note in Qatar, where being LGBTQIA+ is punishable by death. BBC News reported that:

England, Wales and other European nations will not wear the OneLove armband at the World Cup in Qatar because of the threat of players being booked. The captains, including England’s Harry Kane and Gareth Bale of Wales, had planned to wear the armband during matches to promote diversity and inclusion.

A joint statement from seven football associations said they could not put their players “in a position where they could face sporting sanctions”.

“We are very frustrated by the Fifa decision, which we believe is unprecedented”…

However, as the Canary wrote, Iran’s captain Ehsan Hajsafi spoke out about his country’s authorities’ violence and repression. He could face arrest – while the England players would only face a yellow card for wearing armbands. Meanwhile, Iran’s 2-0 victory against Wales on Friday 25 November was an emotional event. Fans took an active stance against their authoritarian government. One supporter had Kurdish-Iranian woman Jîna Mahsa Amini‘s name on a shirt. Mahsa died at the hands of Iranian authorities, after they arrested her for breaching strict dress code rules:

Iran fans booed and whistled their own national anthem against Wales. pic.twitter.com/zwa76NWFdc

Iran's players sing the national anthem this time but loud boos and jeers can be heard throughout the stadium. The TV then cuts to an Iranian man and woman both crying uncontrollably. So sad to see.

An Iran fan holds a shirt with the name of Mahsa Amini. The 22-year-old died days after being arrested and reportedly beaten by Iran’s morality police in September for allegedly not adhering to the nation’s dress code for women. pic.twitter.com/CuEAtc8BJj

Iran fans with a message before their World Cup opener: pic.twitter.com/icJ8E250wN

Fans’ protests and Hajsafi’s bold speaking out could have very real consequences for them – as the arrest of another Iranian footballer showed. As the Guardian reported:

Iranian security forces on Thursday arrested one of the country’s most famous footballers, accusing him of spreading propaganda against the Islamic republic and seeking to undermine the national World Cup team.

Voria Ghafouri, a former member of the national football team and once a captain of the Tehran club Esteghlal, has been outspoken in his defence of Iranian Kurds, telling the government on social media to stop killing Kurdish people. He has previously been detained for criticising the former Iranian foreign minister Javad Zarif.

The Iranians who are protesting face very severe consequences for it. This highlights why FIFA’s pathetic adherence to Qatar’s internal rules around LGBTQIA+ rights is unacceptable. The football body looks ridiculous because footballers wearing armbands is about as weak a protest as it gets – especially compared to Iranian players and fans’ actions. Meanwhile, Khan has come out and condemned FIFA.

In an interview with Gaydio, the London mayor said:

I’m so angry at FIFA, for basically being weak when it comes to standing up for our values. Listen, I understand why in certain cultures drinking is not encouraged. I don’t drink, alright. But for me, there’s a red line when it comes to people not being able to celebrate who they are. I think, you know, we should have stood up to FIFA a bit more. I think FIFA will, in hindsight, be embarrassed by their stance. I said the same thing about Russia. So, I’m not being inconsistent; I’m not picking on Qatar…

The upshot of all this is that FIFA has now said rainbow items will be allowed into matches. Meanwhile, Iran will be taking on the USA in its next match – and England will also face the latter on Friday 25 November. It’s unlikely England’s players will wear their One Love armbands in that game, either – even while Iranian fans, and players, risk their freedoms to protest.