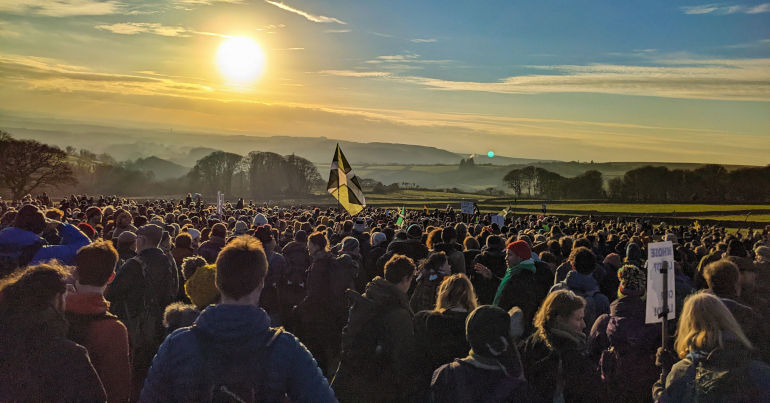 More than 3,000 people marched on Dartmoor on Saturday 21 January in a show of defiance against a high court ruling which ended the right to wild camp on the moor. People travelled from all over the country to join one of the largest land rights protests in recent history.

Dartmoor had been the only location where wild camping was still legal in England. A case brought by hedge fund manager Alexander Darwall, who owns land on Dartmoor, overturned this right. Darwall deployed private security guards to surround the entrances of his home as protesters marched past. The crowd continued up onto Stall Moor, an area of Dartmoor owned by Darwall himself.

The ruling has done exactly what Darwall won’t have wanted it to do: it has sparked outrage across the country over land rights, and is likely to be a catalyst for an even bigger movement to come.

Kim Turner travelled all the way from Brighton to join the march. She is part of Landscapes of Freedom, a group which takes action to fight for our right to roam. She told The Canary:

Dartmoor called and we answered. This was the physical embodiment of our collective love for Dartmoor, for hiking, for being in nature & of course, for our right to wild camp. Contrary to the age-worn, neo-feudal arguments of wealthy landowners, we are the folk who love the land. We respect it. We marvel at it, in it. Nature nurtures.

Our shared response to this modern enclosure flowed up onto Stall Moor, where our hearts beat as one in the biggest land rights protest most of us have witnessed.

After the high court ruling, a ‘compromise’ was reached between Dartmoor National Park Authority (DNPA) and the moor’s landowners. Under the new agreement, the DNPA will pay the landowners to open up parts of their estates for wild camping, transferring funds needed elsewhere into the hands of millionaires. Landowners can take away their permission at any time, and the amount of land we will have access to will be much smaller.

For those of us who believe it is a most basic right to be able to roam freely and wild camp, this new deal adds insult to injury. The entitlement of Darwall and his cronies is breathtaking; they think nothing of forcing us to seek their permission to camp on the land, and they expect us to bow to their demands.

The Canary spoke to Sam, a local from Exeter, who joined the protest. Sam regularly wild camps on Dartmoor. He said:

For me, to be able to camp in the wild, in nothing but nature only a short distance from where I live, is priceless. And I’ll continue to do so because I won’t let greed try and take this right away from me, us.

Indeed, the day after the protest, Sam took his tent and wild camped on the moor:

The Dartmoor ruling is, of course, an attack on those of us who are working class, who are looked upon with disgust if we have the audacity to leave our urban areas and enjoy time in nature. We saw this contempt for us during the Covid lockdowns of 2020, when travel was restricted and we came to Dartmoor to wild camp. Instead of being made to feel welcome, we were demonised by those with more money, as well as by the mainstream media. News about tents being left on the moor made national headlines. DNPA itself contributed to this demonisation by temporarily banning wild camping.

Instead of appreciating that the pandemic was an exceptional period in history, and instead of posing the obvious question as to why there aren’t more spots where we can freely camp to take pressure off Dartmoor, the DNPA began a consultation on new by-laws that would restrict public camping for good.

This nationwide demonisation of outsiders littering our beautiful moorland does, of course, play right into the land-owning elite’s hands. It suits them to portray us as incapable of looking after nature. If enough people believe that, then they won’t have to truly consider giving us the right to roam our countryside.

Jo, a local from Torbay, also argued that this is very much a class issue. She joined the 3,000-strong march, and told the Canary:

At a time when everything is being privatised, people in working class towns are unable to access good mental health support or care. Access to nature is, then, vital for good mental health. We have been forced out of not just the housing market, but also our home towns because of second homes and richer people moving into the area. We’re not going to be forced off our land as well. 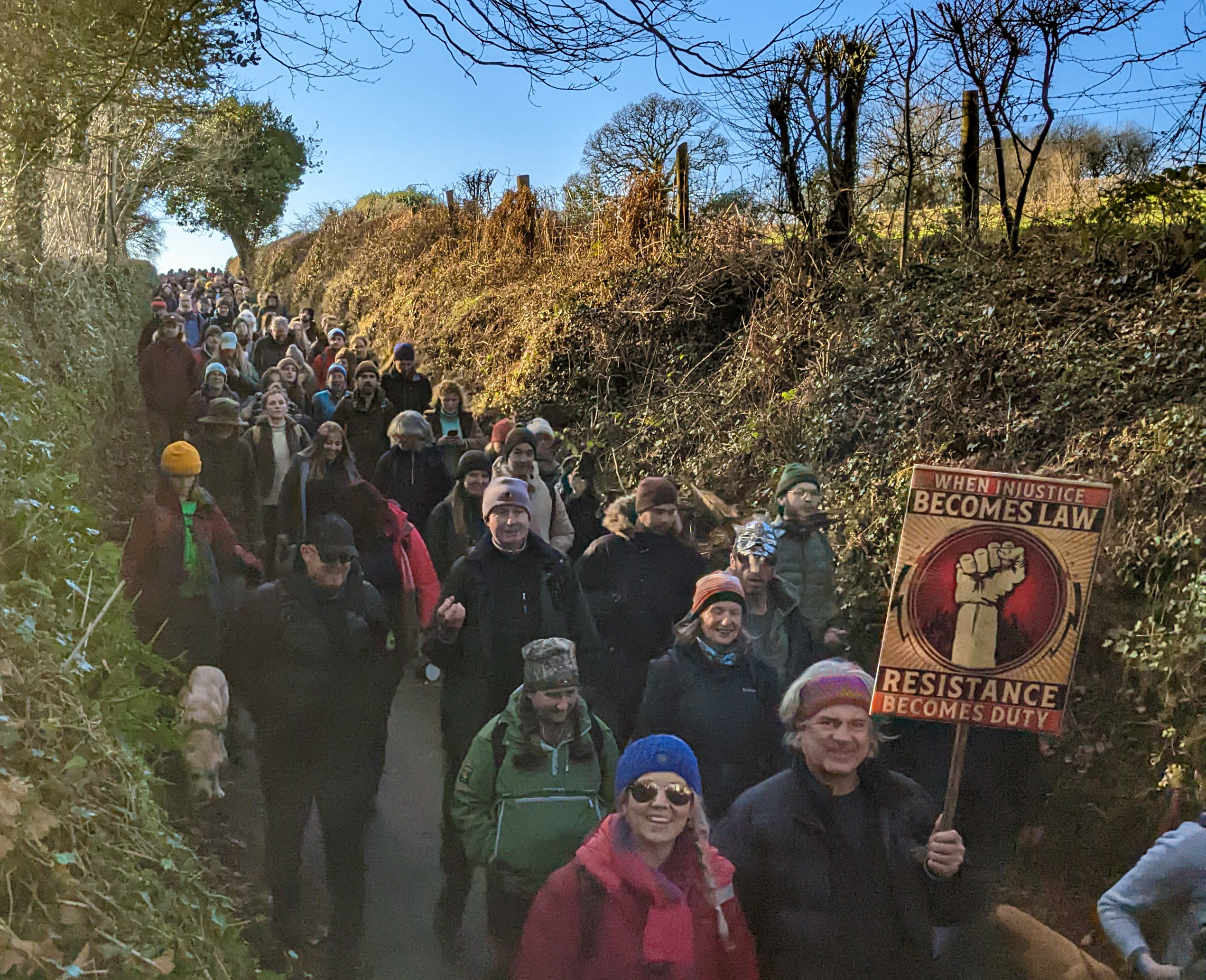 The start of a greater movement

Despite its terrible implications for our access to land in England, the Dartmoor ruling is the wake-up call that many people needed. Jo said:

This case has brought the unfairness of land ownership to the attention of a wider range of people. More and more people are becoming aware of how little we’re able to access the countryside, and we’re not just going to stop at getting the right to camp on Dartmoor back.

A series of mass–trespasses in 2021 and 2022, organised by both the Right to Roam campaign and Landscapes of Freedom, previously contributed to a growing collective consciousness. The trespasses drew attention to the fact that we only have the right to roam on 8% of England’s land. 92% is out-of-bounds to the public, and you’ll be trespassing if you even set foot on it.

These trespasses mobilised roughly 300 people at a time, and the Dartmoor ruling has enraged thousands more, spurring them to make their voices heard. Indeed, the numbers marching on Dartmoor at the weekend were more than that of the famous 1932 mass-trespass on Kinder Scout.

This is just the start of a bigger movement. I’m seeing people getting involved, not just marching, but talking about Dartmoor, sharing posts about it on social media. Before this I wouldn’t have known that they had any interest. This shows just how much people care.

This has become a catalyst for the flourishing Right to Roam movement. This is just the beginning and we will not stop til our rights are reclaimed.

So, in his contempt for the masses, Darwall might have unwittingly unleashed the biggest land rights movement this generation has ever seen.