Daily Mail front page was nothing short of a benefits lie 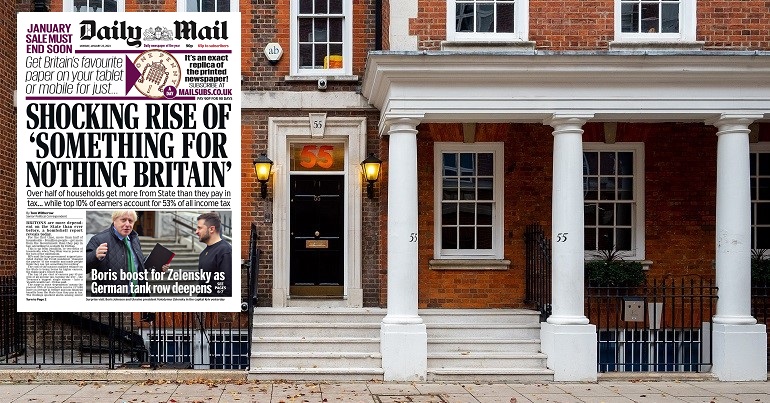 Right-wing shitrag the Daily Mail is back to attacking benefits again. It’s been screeching about “something for nothing Britain”, as a report by a shady think tank based at 55 Tufton Street claims that over half of households get more in benefits than they pay in tax. However, it takes around five minutes to debunk this nonsense – especially considering the Daily Mail is actually attacking part of its core audience in the process.

SHOCKING RISE OF ‘SOMETHING FOR NOTHING BRITAIN’

The article claimed that:

For the first time, more than half of households – 36 million people – get more from the Government than they pay in tax, according to a study by Civitas. But this definition includes the amount individuals receive from ‘benefits in kind’, such as use of the NHS and state education.

This is up from 24 million, or two-fifths of households, when Tony Blair was in power at the turn of the millennium.

Further to this, the Daily Mail went on the attack against several groups of people. It singled out:

the poorest fifth of households [which] receive £17,600 more on average in welfare and non-financial benefits from the State than they pay in tax.

The article also went after the:

So, clearly benefits scroungers and cheats, and lazy older people, are causing all the UK’s problems, right? No, it’s obviously wrong.

Some dubious figures from Civitas

The think tank Civitas produced the report. A brief glance at it shows why the Daily Mail claims the poorest fifth of people get more in benefits than they pay in tax. This is because the Civitas report says they get the most “benefits in kind”, such as the NHS and education. However, this group gets less in actual DWP benefits than the second poorest fifth of people: 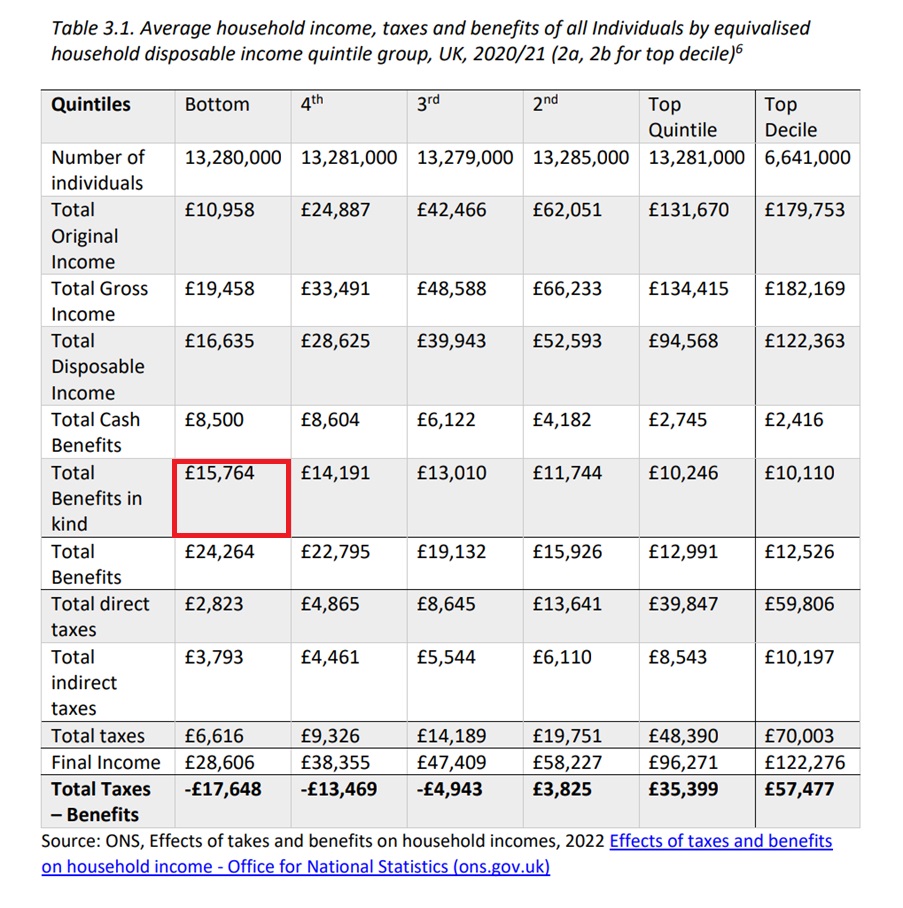 So, what are these “benefits in kind” that the Daily Mail and Civitas object to poor people getting so much of? Well, the report gets its data from the Office for National Statistics (ONS). Its figures show that actually, the poorest fifth of people don’t get as much of some benefits in kind as the richest. For example, they get the most from state education (obviously because they can’t afford to pay private fees). Then, everyone gets similar in terms of the NHS – except the richest, who get less probably because a lot of their healthcare is private. However, rich people are also getting state bungs like subsidised rail travel. Moreover, the poorest people actually get the second-smallest amount in adult social care:

The Daily Mail also stated that Civitas alleges that the richest people are also bearing the “cost of the nation’s massive reliance on the State”. Again, this is demonstrable nonsense. The richest fifth of people pay what they should in ‘direct taxes‘ (income tax, national insurance, etc). However, when you look at ‘indirect taxes’ like VAT, the poorest fifth of people pay vastly more than the richest, with effective tax rates of 19.49% for the poorest versus 6.35% for the richest. Also, the Civitas report is forced to admit that the effective direct tax rate for Council Tax is highest for the poorest people: 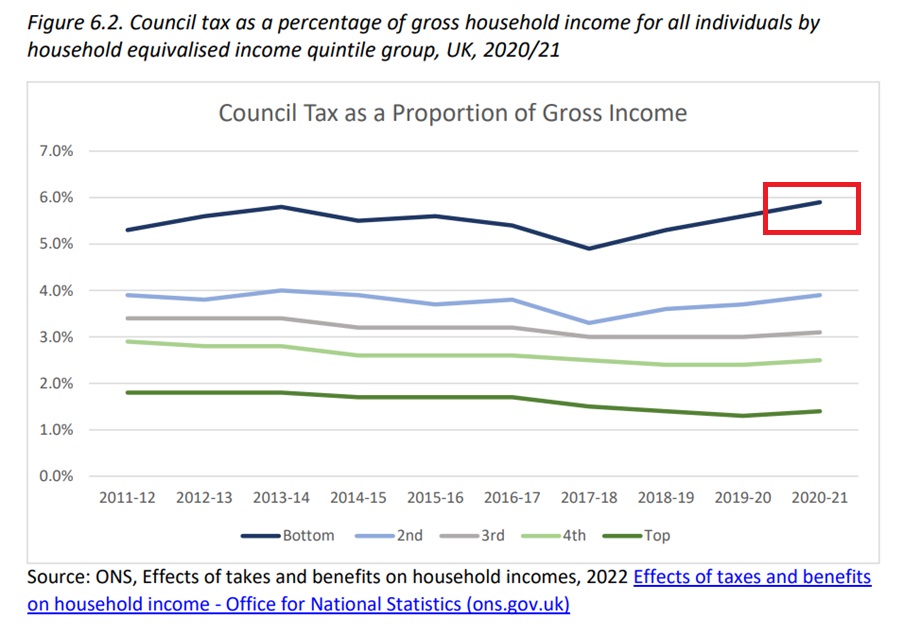 What the Daily Mail claims is a “shocking rise in something for nothing Britain” isn’t as straightforward as it makes out. Moreover, aside from the pseudo-analysis, there are simple explanations as to why people now get more in the Daily Mail‘s so-called “benefits” than they pay in tax. For example:

So, the Daily Mail‘s coverage is utterly manipulative. However, if we take a brief look at Civitas, it’s easy to work out why its research is so dire.

The think tank is based out of 55 Tufton Street. Yes, this is the same address that also hosts the dodgy Institute of Economic Affairs. In 2022, openDemocracy gave Civitas its worst rating for transparency of funding. This hasn’t changed since 2017, when DeSmog wrote that:

Transparify gave Civitas a “highly opaque” zero-star rating this year, having previously been in the two-star category. This was mainly due to its funding information being out of date.

Civitas has previously published work by John Constable, who is now on the academic advisory board of climate science denying think tank, the Global Warming Policy Foundation (GWPF).

Civitas started its life as part of the Institute of Economic Affairs (IEA), becoming an independent think tank in 2000. The IEA‘s founder, Antony Fisher, was part of the Mont Pelerin Society, founded by economist Freidrich von Hayek in 1947 to promote libertarian free market ideas.

Civitas pushing the idea that the state spending – including social security, and public service ‘in-kind benefits’ – was too high is unsurprising, given its free market credentials. Then, the Daily Mail pushed this without question, even attacking part of its core reader-base: right-wing pensioners.

To top off the Daily Mail‘s ‘something for nothing’ lie, it quotes former DWP boss and architect of Universal Credit Iain Duncan Smith as saying:

Lockdown changed the psyche of the British people.

For all those years, we told them you can’t get something for nothing, and all of sudden they did. The British public thought the Government could do it all – even pay their salaries and they don’t have to work.

In reality, successive governments have cut real-terms public spending and slashed people’s social security, while wages have barely gone up at all. The Daily Mail is simply laying cover for years of Tory decimation of public services – and likely signalling more of the same to come. The British people don’t expect something for nothing – many of them are literally struggling to survive under our toxic, corporate capitalist system.