LGBT History Month is happening in Northern Ireland. Someone FaceTime the DUP. - The Canary 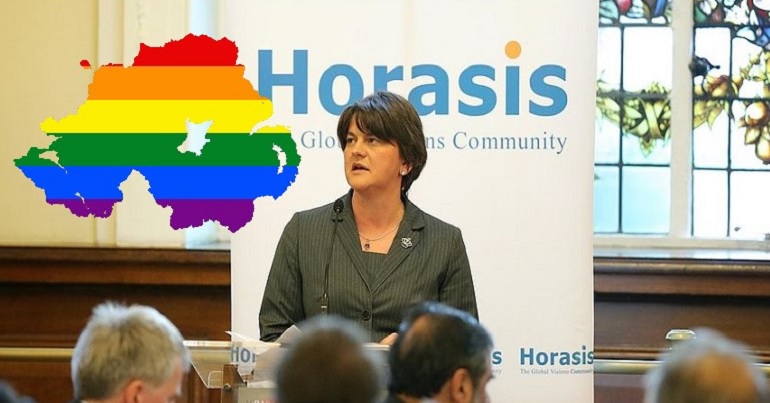 A festival documenting the history of the LGBTQ+ community is taking place in Northern Ireland. And there’s never been a more pertinent moment for such an event, as the country is currently making the headlines over equality. But for one of its political parties, the Democratic Unionist Party (DUP) led by Arlene Foster, a festival of LGBTQ+ history may not go down too well.

The fourth OUTing the Past festival has been running up and down the UK since 3 February. This “National Festival of LGBT History” hosts 12 events across the country. And each hub has unique speakers, debates, activities, performances and presentations: 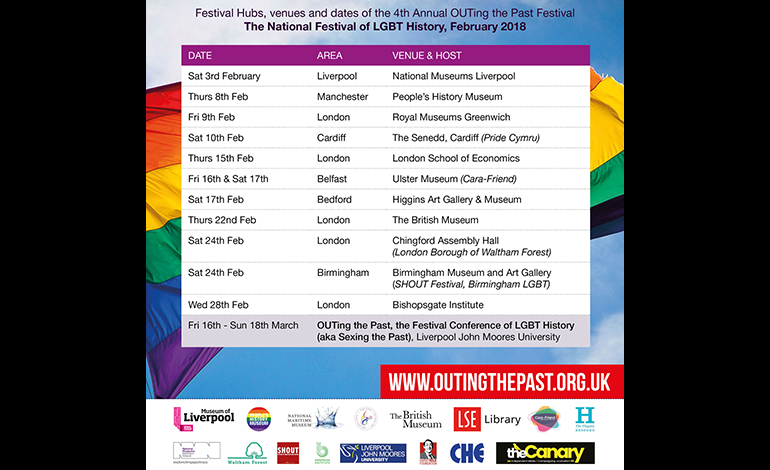 This year’s festival has a full-to-brimming programme in its 12 hubs. It covers a multitude of topics. One event gives a potted history of the first lesbian newsletter, founded in 1964. Another is a talk called We’re Queer and we should be here: LGBT supporters and football. And the Belfast hub looks set to be particularly groundbreaking.

The Canary spoke to Dr Jeff Evans, OUTing the Past’s Joint National Coordinator. He told us about the LGBTQ+ community’s history in the country, the march for equality, and what he hopes the festival will achieve.

Northern Ireland is currently in political turmoil, as the collapse of the power sharing agreement between the DUP and Sinn Féin continues unresolved. But speaking out on the issue, Shadow Northern Ireland Secretary Owen Smith has called on Theresa May to take charge of the situation. He said specifically that the PM should “take forward issues such as equal marriage”, overriding the DUP and Sinn Féin.

But Evans believes that, while Northern Ireland is still the only country in the UK not to recognise equal marriage, we should not underestimate the progress that has been made. He told The Canary:

The advance of LGBT and human rights in Northern Ireland over the last few decades has been remarkable by any political standards. It has seen more popular support and an increasing public ease with the realisation that gender and sexual diversity is reality, and human singularity or ‘normality’ a harmful myth. The growing popular Irish acceptance and ease with LGBT equality is best shown by the recent victory of the Equality Marriage referendum in the Republic. The annual widespread celebration of LGBT History Month each February and high-profile LGBT people in public life suggests that sexual and gender diversity is increasingly being recognised and validated.

The OUTing the Past hub in Belfast kicks off on Friday 16 February with the festival launch hosted by the Lord Mayor, Nuala McAllister, at Belfast City Hall. It includes presentations from councillor Jeff Dudgeon and senator David Norris about the Decriminalisation of Male Homosexuality Act in their respective jurisdictions. The launch is supported by Belfast City Council.

The festival then officially begins the following morning at the Ulster Museum. It will be an educational and entertaining journey, made up of short 20-minute historical presentations and personal testimonies not heard in Belfast before.

And ‘educational’ is key to the OUTing the Past festival. Evans said:

A bulwark for any group unfairly discriminated against, legally and informally, is to empower them with the public validation that history can, and does, provide in abundance. A community with access to its past is far more powerful and comfortable. And it’s also more difficult to push about.

It’s no accident that LGBT history is not on any school or college curriculum, and that women’s and BAME history are also marginal to such programmes. Robbing a community and the general population of a balanced and inclusive reading of their past is an essential tool in getting away with aggressively pursuing and maintaining an anti-equality agenda.

Northern Ireland’s DUP is seen by many as pushing an anti-equality agenda. The party has been marred by criticism over its stance on LGBTQ+ rights, particularly its refusal to support equal marriage. But individual DUP politicians have come under fire too.

The demands of the gay lobby are insatiable, they simply do not know that we have gone as far as we can go in the form of civil partnerships.

And there have been other controversial comments by former DUP MPs. LGBTQ+ charity Stonewall said in 2017:

The DUP have a poor record on LGBT rights. Although the party leader claims they are not anti-LGBT, the DUP have vetoed same-sex marriage in Northern Ireland five times, despite a majority of the public and representatives being in favour.

A party that constantly misuses its veto in this way is not a party that shares Stonewall’s values or the values of most people across the UK.

Many commentators have made the mistake of suggesting that the DUP represents the views of Northern Ireland. In fact, as Evans explains, the country has a proud history of fighting for LGBTQ+ rights. And as is the point of the OUTing the Past festival, these achievements need to be brought to the fore. Evans said:

I think too little work has been undertaken to date about the remarkable human and LGBT rights campaigners, active during the Troubles. Much of that work has yet to be historicised. And there’s not even an archive of primary sources with which to start the process.

But a remarkable example is a little-known event that occurred in the early 1980s in Belfast. In the nationalist stronghold and largely Catholic community of West Belfast, a large delegation of LGBT students were warmly welcomed. What this event highlights is that the Troubles engendered heightened political awareness. As the film Pride suggests, when people are in conflict with the state, political alliances are forged that at other times might be thought unthinkable.

Northern Ireland still has progress to make over LGBTQ+ rights. But events like OUTing the Past will embolden the movement. As Evans told The Canary:

OUTing the Past: Belfast is a showcase. It documents the wonderful and fascinating insights of such an important and dynamic aspect of our collective past: who we love and are! A history that has been consistently denied or demonised. But now, through some remarkable scholars and the community, our history is beginning to emerge into the light of day. Albeit, it is still marginalised within academia and mainstream media.

And he hopes that the festival will serve to push the LGBTQ+ rights campaign in Northern Ireland to the fore. The timing couldn’t be more crucial either, with the DUP currently in an effective coalition with the Conservatives:

In the wider sense, we hope OUTing the Past: Belfast helps to further highlight the current injustice faced by the people of Northern Ireland. People whose legal rights are less than those for the rest of the UK, and whose rights regarding marriage are less than those EU citizens just across the border in the Republic. Northern Ireland has no equal marriage and no access to NHS abortion services. These are discriminations hypocritically sponsored and maintained by the British parliament and government. A festering injustice that, given the present government’s dependence on the DUP, is highly unlikely to change.

OUTing the Past: Belfast is probably one of the most crucial stops on the festival’s UK tour. It is taking place against a backdrop of political battles between its ruling parties and a history that casts a shadow to this day. Hopefully, the festival will shine some much needed light onto the LGBTQ+ movement in the country. Because it’s a movement that has been there for decades. It’s just quietly gone unnoticed. Until now.