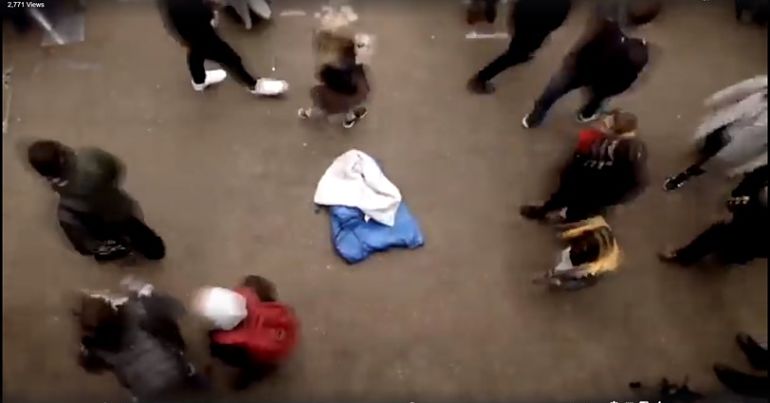 At times homeless people can feel invisible. The person who sits on street corners or under bridges is in the thick of city life, yet is rarely acknowledged. They don’t fit in with the ideals of a wealthy economic hub so people often look the other way, eyes averted.

But a young filmmaker is seeking to change these attitudes.

Motivation of the Invisible

Ed Kirwan calls his project Motivation of the Invisible. He told The Canary:

Those who are homeless have nothing. They are invisible in our current society. ‘Motivation of the invisible’ aims to combat people’s flawed societal upbringing through influential photos, videos and interviews.

Motivation of the Invisible comprises of a series of short videos that give a voice to people with lived experience of homelessness.

From talking to many, many people the big message that has come out of this project is the importance of acknowledgement – to some it means more than money, more than food. The ability to be recognised is slipping away from many on the street as compassion fatigue sets in.

Kirwan demonstrates the power of acknowledgment through giving a platform to those with experience of homelessness:

And the project highlights the loneliness that comes with being constantly ignored:

“Not a human being”

Motivation of the Invisible is at its most powerful when it portrays homelessness straight from the mouth of those sleeping rough.

In the below video, filmed at Streets Kitchen’s London occupation in March, Mo tells Kirwan about the sub-humanity of rough sleeping:

Too often the mainstream media portrays homeless people as stereotypes that are easy to ignore.

But Motivation of the Invisible is attempting to change this. Giving a platform to people with experience of homelessness and highlighting the importance of acknowledgment is a much-needed step in countering the blind eye that Britain is generally turning to its deepening homeless crisis.