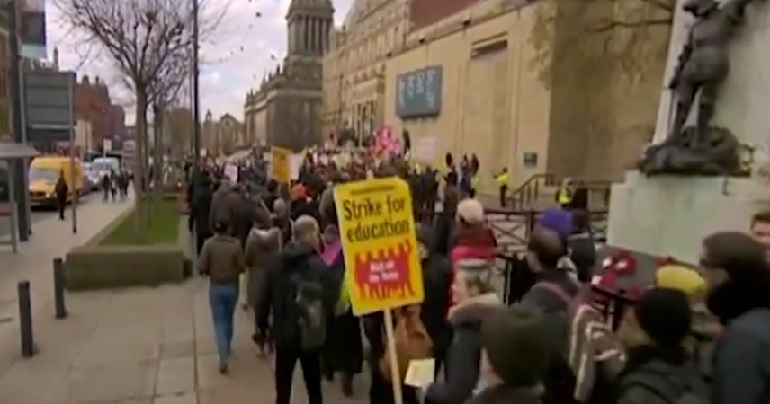 Thousands of British education workers from over 60 universities are striking over proposed pension changes which they fear could leave them “facing quite serious poverty in our old age”.

The industrial action, which began on 22 February, is reportedly the largest in higher education in recent history.

‘An ideological attack on the public sector’

Priya Gopal, a University of Cambridge lecturer and a University and College Union (UCU) member, spoke to Democracy Now! about the strike:

Academics in Britain are not hugely well paid, but what we have been able to expect in recent decades is a modest guaranteed pension… But the newest proposal, which has come to us from the employers’ body Universities UK, or UUK, actually offers a very damaging scenario in which many of us stand to lose as much as half of our expected pensions. In other words, we would be facing quite serious poverty in our old age…

the enemies we face are fundamentally ideological. They are people… who want to take education away from the public sector as a shared good… and turn it into a privatised commodity.

She summarised in the full interview by saying:

what we’re up against is an ideological project of attacking pensions and services, and trying to kind of privatise the risk rather than for the employers to carry it on…

As the BBC reports:

Staff at 64 universities say pension cuts will cost them an average £10,000 a year, but the employers say the scheme has a deficit of more than £6bn.

The UCU says industrial action began “after the universities’ representatives refused to return to negotiations”.

A new round of talks started on 6 March.

The strikers are not alone

Gopal spoke of “tremendous amounts of support from students” for the UCU strike. But she also mentioned solidarity from the US.

In West Virginia, tens of thousands of education workers are striking too. They are demanding higher wages and a cap on increasing healthcare costs. All public schools in the state have shut as a result. And both UCU and West Virginia strikers have shown each other support on Twitter:

From York to Charleston! Lecturers in the UK stand in solidarity with striking teachers in West Virginia and now Oklahoma. #USSstrike #WVteachers #WVTeachersStrike #55strong #WVTeachersUnited pic.twitter.com/j26jxzTGKp

The past can wait. The future needs urgent attention.

given the legacy of anti-union rhetoric and anti-union politics in this country, it is quite remarkable that a typically nonconfrontational sector like the professoriate is coming out in force onto the picket lines and into withdrawing their labour…

Indeed, education workers don’t take the decision to strike lightly. So this is clearly an important issue for them.

Author and geneticist Dr Adam Rutherford perhaps said it best in a solidarity message for strikers on 5 March:

My Science Week talk at @uniofleicester on Monday 12th is postponed in support of the #USSstrike as I will not cross the picket line. @ucu @UniversitiesUK pic.twitter.com/mnwnKBJ61j

In short, the past is behind us – but the struggle for the future is very much right here and right now.