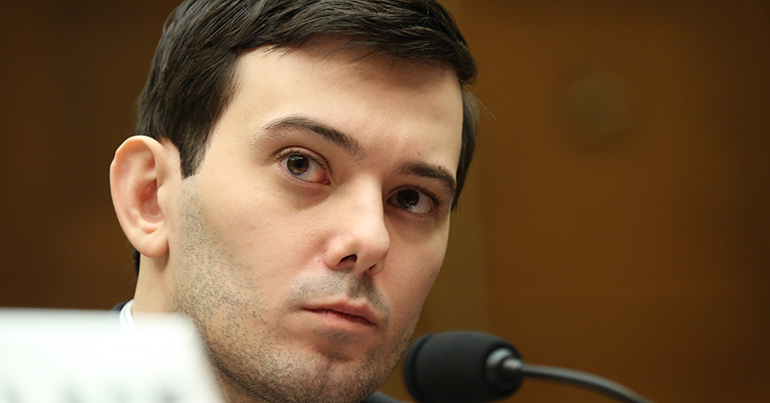 Martin Shkreli, otherwise known as “Pharma Bro”, was sentenced to seven years in US prison for defrauding investors on 9 March. He cried in the courtroom prior to the sentencing.

It’s, however, the 5,000% price increase he placed on the life-saving drug Daraprim that Shkreli is most infamous for. So, after the sentencing, social media users suggested selling his tears at an “artificially inflated price”.

A New York court handed down the sentence with credit for six months already served. Shkreli broke down in tears before the judgement, admitting to “disgraceful and shameful actions”. So writer and actor Kumail Nanjiani joked about putting Shkreli’s tears to use:

I wanna get Martin Shkreli’s tears and sell them at an artificially inflated price.

This set off an onslaught of responses on Twitter. Nanjiani’s tweet attracted over 50,000 likes and thousands of comments. Most of the comments were in line with his sentiment:

I've heard he's been referred to as Pharma Boy.

*sell them back to him at an artificially inflated price

Shkreli-Tears are the new cryptocurrency

Some people, however, were angry that Shkreli’s conviction was for defrauding investors rather than the exploitation of sick and vulnerable people. Shkreli dramatically hiked the price of Daraprim in the summer of 2015. It is used to treat toxoplasmosis in Aids and cancer patients. The rise meant that a years’ worth of treatment for toxoplasmosis shot up to as much as $634,500.

There is also a $7.4m judgement against Shkreli and he may now have to give up his Wu-Tang Clan album to help pay it. This is a one-off copy of the album Once Upon a Time in Shaolin, in a silver-and-nickel case. But that’s a small and superficial price to pay in comparison to the exorbitant sums many people paid for Daraprim.

This kind of “drug-price-gouging” is still common practice. And despite this sentencing for Shkreli, Daraprim (which once cost $13.50) still costs $750 a pill for most people.

Featured image via House Committee on Oversight and Government Reform/Wikimedia