Amid attempts to whitewash MLK’s legacy, activists revive his radical dream - The Canary 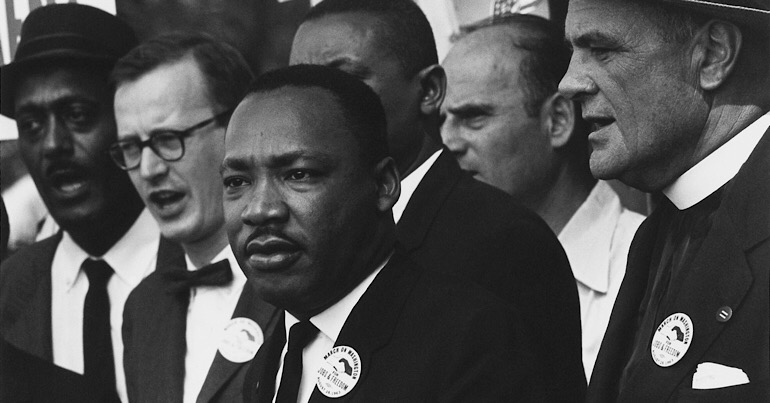 It’s that time of year again when politicians and pundits alike pretend to champion the legacy of Martin Luther King Jr while not making clear exactly what they think that legacy is. But even as conservatives and ‘centrists’ try, and fail, to make themselves seem like heirs to King’s movement, activists are organizing to make his radical dream a reality.

The White House chimes in

On the 50th anniversary of King’s assassination, conservatives have latched onto him in generic terms, whitewashing his radical socialist vision.

Not one to lose an opportunity to jump on a trending topic, US President Donald Trump tweeted a video in praise of King:

Today we honor Dr. Martin Luther King, Jr. on the 50th anniversary of his assassination. Earlier this year I spoke about Dr. King’s legacy of justice and peace, and his impact on uniting Americans. #MLK50 Proclamation: https://t.co/XXtPO0VX5A pic.twitter.com/SH0esMSyMT

50 years ago today, Dr. King's life was tragically cut short – but that did not stop his immortal words, his courageous example and his faith from inspiring generations of Americans. Today we honor the man and the Dream. #MLK50

Missing from both tweets was any mention of exactly what King’s dream was or how to achieve it.

Not to be outdone, some liberals among #TheResistance took to Twitter on the anniversary of King’s murder to share their thoughts on his dream. Among them was Scott Dworkin, a regular fixture on MSNBC and co-founder of the Democratic Coalition, a Super PAC to resist Trump.

“But I want you to know tonight, that we, as a people, will get to the Promised Land. So I'm happy, tonight. I'm not worried about anything. I'm not fearing any man. Mine eyes have seen the glory of the coming of the Lord.” MLK’s last speech #MLK50 #MLK pic.twitter.com/34tLvQbRID

As with the Trump and Pence tweets, Dworkin’s lacks any context for what King had planned in the months leading up to his assassination.

In January, meanwhile, independent journalist and activist Geoff Campbell uncovered evidence he says shows Dworkin used money raised for his SuperPAC to line his own pocket. And self-serving pundits were hardly King’s idea of leaders:

Leftists speak out on King’s legacy

"Call it democracy, or call it democratic socialism, but there must be a better distribution of wealth in this country for all of God’s children." -MLK

We need more truth tellers, 50 yrs later & there is still so much progress to be had! #MLK50 pic.twitter.com/eydBKFSkRk

What was that radical vision? Adam Johannes, an activist based in Wales, states it plainly. King, he says, had a plan to end poverty before an assassin’s bullet snuffed him out:

MLK didn’t DIE 50 years ago… he was MURDERED 50 years ago. When we start talking about why King was murdered THEN we will understand King had more than “A Dream”, he had an analysis and a plan to end systemic poverty and #UniteThePoor across all lines of division #MLK50 pic.twitter.com/mnXmrcXqeU

By the end of his life, King had embraced a more radical vision, calling for democratic socialism and an end to the Vietnam War.

Shortly before his murder, King had planned a ‘Poor People’s Campaign,’ a march and encampment in Washington to demand housing and a guaranteed income:

King died before he could lead the campaign.

Before his assassination in 1968 Martin Luther King Jr. started to realize his "dream" had become a nightmare. MLK then started working on the #PoorPeoplesCampaign so we can get our "check." It's no surprise mainstream media won't play this footage even on this day. #MLK50 pic.twitter.com/k6S3izFyKZ

Though it carried on without him, King’s death shifted the focus and dulled the momentum of the movement. The campaign largely failed to meet its goals.

50 years later, activists are organizing a new movement under the same name, and hope to finally fulfill on the promise of King’s dream.

The #PoorPeoplesCampaign is marching now in #Memphis with #MLK50! pic.twitter.com/dyWSlKoaUM

3 weeks before the original #PoorPeoplesCampaign was supposed to launch, Dr Martin Luther King Jr was Murdered. Today we continue his work, and reclaim why we need to @UniteThePoor #MLK pic.twitter.com/vpEgGrv09E

Instead of generic calls to honor King with words, we should join groups looking to carry them out with action.