According to Boris Johnson, Jeremy Corbyn made him lie about the Salisbury poisoning... - Canary 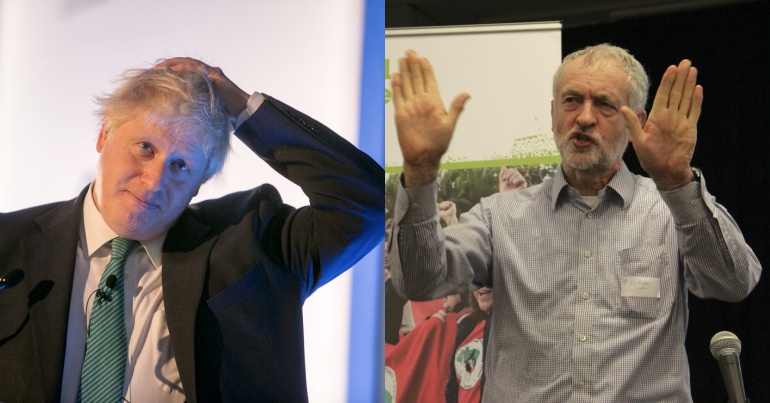 Boris Johnson has been accused of ‘misleading the public’. He stated that experts from Porton Down were “absolutely categorical” that Russia was the source of novichok, the nerve agent that poisoned Sergei Skripal and his daughter Yulia in March.

But on 3 April, Porton Down said it could not identify the “precise source” of the novichok. And then, on 4 April, it also emerged that the Foreign and Commonwealth Office (FCO) had deleted a tweet that also claimed the nerve agent was “produced in Russia”.

Amid calls for his resignation, Johnson’s answer was… to blame Jeremy Corbyn. Obviously.

Johnson issued a series of tweets outlining his position. Firstly, he blamed Corbyn:

It is lamentable that Jeremy Corbyn is now playing Russia’s game and trying to discredit the UK over Salisbury attack.
Let’s remember the key facts:

Next, he outlined his “key facts”:

1) Porton Down identified nerve agent as military grade Novichok; 2) Russia has investigated delivering nerve agents,likely for assassination,& as part of this programme has produced and stockpiled small quantities of Novichoks; 3) Russia has motive for targeting Sergei Skripal.

According to Johnson, everyone else is “convinced”. And, don’t forget, it’s actually all Corbyn’s fault:

28 other countries have been so convinced by UK case they have expelled Russians. In contrast, Jeremy Corbyn chooses to side with the Russian spin machine.

It is true that Corbyn urged caution before jumping to conclusions about the source of the novichok. And this sent right-wing media into a frenzy. But it now seems Johnson is also blaming Corbyn for his own words to a German media outlet:

And Corbyn is also probably responsible for the actions of the FCO, of course:

NEW: This is the cached version of the Foreign Office tweet which said that Porton Down definitively identified the source of novichok as Russia. Now seems to have been deleted. Not a good look. pic.twitter.com/ewXS9tp6bm

This looks very embarrassing for Boris Johnson. Foreign Office confirm they deleted a tweet that said Porton Down said Salisbury nerve agent was 'produced in Russia'.https://t.co/O3qMtH5Kgl

After a month of near-constant smear campaigns against Corbyn, many on Twitter were quick to challenge Johnson’s version of events:

Just in case you haven't figured it out:

3. Tory's chums in the media report the smear, rather than the Tory lie/corruption/depravity pic.twitter.com/XF7e7fa8Gf

The key facts are, Theresa May's spy poisoning story is unravelling, which is inconvenient to your Brexit is a mess coverup agenda, and pretending May's "strong and stable" for the local elections you're going to get trashed at in May.

Fixed this tweet for you too Boris………
just go ahead and resign will you?#IStandWithJeremyCorbyn#SackBorisJohnson#Salisbury pic.twitter.com/D800DLlR53

But as diplomatic tensions rise between the UK and Russia, Johnson’s ‘error’ has serious implications. So calls to #SackBorisJohnson are spreading across Twitter:

Boris Johnson told a blatant lie, designed to stir up tensions between Russia and the West. This is an act of astonishing duplicity and warrants nothing less than his immediate dismissal from public duty. #SackBorisJohnson https://t.co/p9roETeuGY

It's clear Boris Johnson's comments about Russia were inaccurate. With tensions across the world high enough as it is, such behaviour is unacceptable for a Foreign Minister. He must go.#SackBorisJohnson pic.twitter.com/aVtEenTRth

EVERYTHING BBC1’s NEWS AT TEN “FORGOT” TO TELL YOU about BORIS JOHNSON & the PORTON DOWN revelation! If you think the public should know the TRUTH please RT! pic.twitter.com/CCPv7gKvXP

But others have not been afraid to call Johnson an outright liar:

My computer after trying to keep up with Boris Johnson's lies for a new mix of Liar Liar. pic.twitter.com/mAZWaOOpyx

“Egg on his face”

Corbyn clearly stated that Johnson “needs to answer some questions”. And he went on to say that Johnson has “egg on his face for the statement he made on German television”:

Jeremy Corbyn: "Boris Johnson has exceeded the evidence and has serious questions to answer".

This is serious. When will the BBC wake up? pic.twitter.com/1BlmemHJTk

The latest announcement is that Russia’s request to the Organization for the Prohibition of Chemical Weapons (OPCW) for a joint investigation into this case was voted down. On 5 April, Russia has called for an emergency session of the UN Security Council – a move that the FCO has already called “diversionary tactics”. And this suggests that relations between the UK and Russia look set to deteriorate further.

According to The Moscow Times, Sergei Naryshkin (head of Russia’s foreign intelligence service – SVR) warned of “‘unprecedented hypocrisy’ and a Cold War mentality” from the West, and said:

In fact all the norms that regulate intergovernmental relations are given precisely the opposite meanings.

As Johnson blames Corbyn, who is so open in his opposition to war, chemical weapons and the government handling of this case, Orwell’s words do seem alarmingly accurate.