Huffington Post refused to publish this report on the Salisbury poisoning. Here it is in full. - Canary 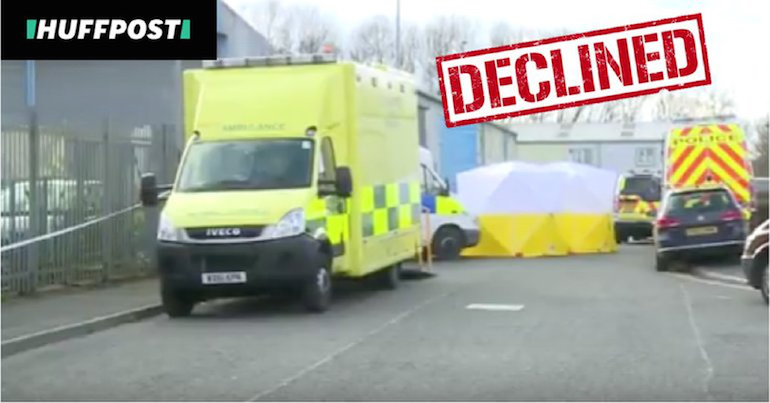 This is an original report by Joshua Funnell. It is republished here with the author’s permission. All opinions are the author’s own and not those of The Canary. The original post was entitled:

Skripal with Hindsight: Salisbury May Yet Be Corbyn’s Finest Hour

I wrote the following piece two weeks ago on 18 March. The Huffington Post – who I’ve written for on and off over the last 8 years – refused to publish it.

When I emailed them (twice) to ask why, I received no reply. The contempt and indifference they have for their writers is staggering. Writers without whom their ‘for the exposure’ profit extraction model could not exist. Unfortunately, this is a rant for another time.

The period immediately after Skripal exposed (once again) the flimsy quality of our democracy, the limits of our “free and open society”, and the cowardice of our brave and intrepid ‘free press’. A range of media, from the increasingly discredited BBC to the eternally discredited Daily Mail, have demonstrated a tour de force in the wilful promulgation of state propaganda.

Scepticism has not been permitted. Credulity to the all-powerful British executive was expected and willingly adopted by the media, on both right and ‘left’ of the political establishment. Those who cautioned to show the mildest degree of restraint before we bellicosely cast accusatory aspersions at Russia were called ‘Russian stooges’ and ‘Kremlin apologists’.

But hey, thank goodness we don’t live in an oppressive country like Russia, where the state dictates the truth and the media are forced to comply… Although, in the UK, media seemingly choose to comply. Not only did they comply, but they seemed to proactively and publicly police and admonish those who dared to deviate. Surely this is far more disturbing?

Yet today’s revelations (Tuesday 3 April) have highlighted that the media’s servility to the May government’s account at the inception of the crisis – as many of us cautioned – was unfounded. In doing so, they gifted her a Falklands moment, based upon a dubious evidential rationale.

Porton Down has stated categorically that it could not directly attribute the so-called nerve agent to Russia:

This is in direct contradiction to what the paragon of truth, Boris Johnson, originally asserted on behalf of the government:

For the avoidance of doubt – here is Boris Johnson clearly claiming that Porton Down had confirmed to him the source of the Salisbury nerve agent. Words matter. He lied. pic.twitter.com/oeuZNNxbAZ

And so, in light of the above, now seems a good time to return to my original article with the full benefit of hindsight. I hope it reveals, once again, that scepticism of the state when it makes such bold claims with significant repercussions for our national security should be the media’s default setting, not the exception. They have again fallen foul of the ‘Shock Doctrine’, fallen into suspended animation, and grovellingly turned to an agenda-laden state for truth when they should have been finding it for themselves. This sceptical failure is all the more incredible considering the government in question is buried in a steaming heap of scandal and failure it’d be happy to escape from.

Our brave media have proven to be the real stooges of state power.

The report – Salisbury may yet be Corbyn’s finest hour

Russia may yet be proven responsible for Salisbury, but the vociferous defence of the government’s allegations, despite a lack of evidence, has demonstrated what historian Mark Curtis describes as “a remarkable obedience to authority”, both by the media commentariat and the political establishment.

Scepticism should be obligatory in the post-Iraq, Libya, Afghanistan era, yet once again it is conspicuous in its absence. Despite a context of recent foreign policy disasters, the government still has the audacity to demand unwavering fealty to its conclusions. Further, it is insisted that we place a religious faith in the accounts of intelligence agencies; agencies historically tainted by their routine use of deception to facilitate desired foreign policy objectives.

Predictably, the media have formed an unthinking mob of Dad’s Army, war-ready jingoists. Against this tide of vocal reactionaries – front and back – stands, once again, Jeremy Corbyn. Corbyn ‘the traitor’, who inconveniently for his critics is a foreign policy Nostradamus, whose bloody predictions have been vindicated time and again. Instead, the media prefer the judgements of the same New Labour cheerleaders of the aforementioned bloodbaths, the so-called “moderates” and “centrists” who Owen Jones aptly describes as “splashed across the media as statesmen, as sensible hard-nosed individuals who understand reality”.

Why are the politicians and pundits who brought us Iraq and Libya still treated as statesmen and sensible hard-headed pundits? pic.twitter.com/wYggJiBfsI

The media just don’t get it.

Almost a year has passed since Corbyn slapped the Westminster nexus round the face with a big wet fish, yet the Salisbury saga again highlights a fundamental inability by media to understand the seismic shift Corbynism represents – namely the public’s preferred dove foreign policy – and shows again how out of sync the media are with this reality.

Like so many others, I came of age during the Iraq war. As a clueless 15-year-old, I recall shouting support at the TV as death rained down on Baghdad. I later discovered that BBC One News had carried more pro-war voices than any other mainstream UK broadcaster, so perhaps my youthful jingoistic exuberance was inevitable. The subsequent revelations of systematic lying by government, intelligence, military, media, the mass deaths, the wasted resources, and the terrorism it subsequently unleashed, has embedded in me, and many of the public, a deep distrust of state power (a principle you might expect Conservatives to sympathise with…).

Of course, every subsequent foreign policy event, we are assured, is nobler. “Yes, Iraq was terrible Josh, but Libya is different,” I was assured by liberal friends at Warwick University. We then proceeded to destroy the country, created a staging ground for Daesh (Isis/Isil), and unleashed a refugee crisis that helped dismember the EU.

Those of us who stood firm during such times were maligned as ‘cranks’, ‘apologists’, ‘naïve’ etc… just as we were when we stood by Corbyn prior to the election, isolated against a barrage of conventional wisdom. The alienation many of us were wrongly made to feel during this period has created a strong affinity for Corbyn’s unapologetic, principled stance and within us an uncompromising defiance of state narratives even in the face of an onslaught of mockery.

Corbyn’s reluctance to embark on foreign adventures and his deep scepticism of elite agendas should surely be the norm in any functioning democracy.

As such, contrary to the beliefs of blowhards like Chuka Umunna, Liz Kendall, and the falsely labelled ‘centrist’ John Woodcock, Corbyn’s cautious approach to Russia is far more aligned with public opinion; conservative even. My advice to such warmongering ‘centrists’ is to tread carefully: such figures in the Labour Party are again highlighting their fundamental incompatibility with the new Corbyn era, and their residual allegiance to the neo-imperial foreign policy of New Labour. Their latest insurrection against Corbyn’s leadership on Russia may yet prove another significant milestone in their further alienation from the party membership. In short, they have no future.

So Salisbury is yet another revealing and disturbing moment in British political life. Our idealised fantasy of an open democracy, a free press, plurality of opinion, the celebration of scepticism and dissent, has once again come crashing down after colliding with energetic demands for mass conformity by those in power. It reveals that, on matters of foreign policy, the hive mind still prevails amongst elites. Deference to executive authority seems to be sacrosanct and etched in stone during such times, yet it is exactly during these fluid periods of uncertainty, when so much is at stake, that irreverence and scepticism are essential. As Laura Kuenssberg revealingly stated on BBC News at Ten on 14 March 2018:

It’s tradition that the two parties stick together when it comes to foreign policy.

– You can read more from Joshua Funnell at the Huffington Post and his own blog.