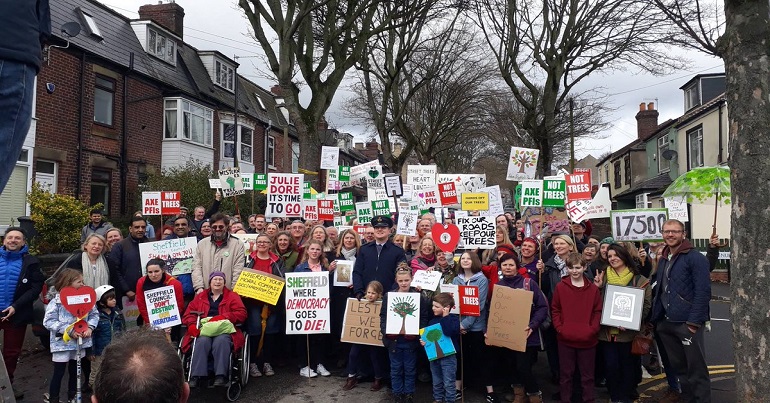 Around 200 residents and campaigners came out in force on Wednesday 4 April to show their opposition to the possible felling of trees planted in memory of the First World War.

But amid the quietening of the chainsaws, one street is still very much making a noise.

Western Road in Sheffield is home to the city’s First World War memorial trees. Originally, 97 were planted on 4 April 1919 in memory of the pupils of Western Primary School who fought in the war. But over the years, this number has reduced to 54.

In December 2017, the council voted to fell 23 of these which came under its “replacement category”. It claimed that the cost of remedying problems surrounding the trees was too much. But as The Yorkshire Post reported, there were angry scenes on the day of the meeting, with residents shouting “shame!” at the Labour-led council.

So now, on the anniversary of the trees’ planting, people came out to show their concern and support for Western Road’s memorial.

Others, meanwhile, pointed to the large turnout:

Lots of people obviously photoshopped in by clever tree protest types. Oh hang on, they seem to be 3d real people. How can that be? @sheffcouncil say tree protectors are a dodgy minority?! #saveshefftrees #TheWorldIsWatching @BiancaJagger @caitlinmoran @JayMitchinson @helenpidd pic.twitter.com/gyhvtOGNSq

This social media user noted a bit of irony in a tweet by Sheffield City Council:

Overall, the council is felling 41 memorial trees across Sheffield, and planting 300 more. 60% of residents surveyed, though, thought the felling would be “out of keeping with the intent of the memorial”. As artist Dan Llywelyn Hall told The Star:

Each tree was planted to represent an individual. They are more than living street furniture.

But the large public display of disquiet is not just over the First World War trees. The anger in Sheffield runs deeper than that.

As The Canary has been documenting, Sheffield Tree Action Groups (STAG) are campaigning against the felling of trees around Sheffield. The city’s Labour-led council is undertaking a 25-year, £2bn highway maintenance programme which includes the care and felling of trees. There have been ongoing protests from STAG, opposition councillors, and residents over the programme.

These demonstrations have been highly charged: one saw two pensioners arrested, and another saw local residents reportedly face off against over 30 police officers, private security, and heavy plant machinery. Since then, the council has been forced to publish documents which campaigners claim are a “smoking gun”. They say it shows the council had a target of felling 17,500 trees all along – something the council denies.

During this saga, the council took three campaigners to court to prevent them taking “unlawful direct action or from encouraging others to take direct action” against the tree felling.

After a judge ruled in favour of the council, it is now reportedly seeking costs from two of the campaigners – Alastair Wright and Calvin Payne – of £11,000 and £16,000 respectively. Supporters of the pair have set up a crowdfunding campaign to cover these costs.

While the felling has paused, people’s emotions in Sheffield still run high. And the public support for Western Road’s trees shows that the issue remains one of the most contentious facing the council.