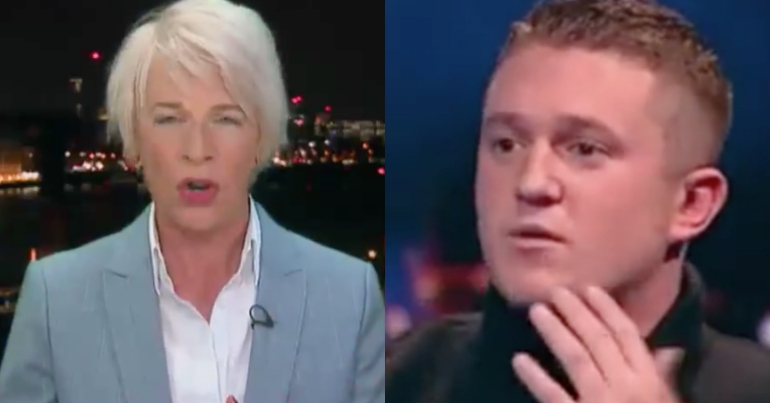 Serial racist Katie Hopkins is at it again. By ‘it’, we mean making a complete and utter fool of herself.

This time, she decided to ask a legal professional a series of questions about ex-English Defence League (EDL) leader Tommy Robinson’s imprisonment.

But it didn’t end well for Hopkins, as she was owned by social media users.

‘The Secret Barrister’ has written an excellent and detailed account of Robinson’s arrest and imprisonment. But this wasn’t enough for Hopkins. So she tweeted to them:

But the Secret Barrister gave her short shrift:

No, I’m busy doing a proper and important job that contributes to society. Do your own homework. https://t.co/sYhXjkoOdo

And as others pointed out:

Ever heard of google?

Luckily for Hopkins, there were other barristers on Twitter to set her straight:

Here's one, I could find dozens upon dozens of contempt sentences between 12-24 months https://t.co/DPcsd4yDpJ

Contempt is more often than not dealt with on the spot, as indicated by the Criminal Procedure Rules pic.twitter.com/RqeqbiWmH3

Sometimes, you don’t even need a lawyer

But it wasn’t just legal professionals who were able to help her out:

Where do you have your information about his personal lawyer being persuaded not to attend? Do you mean his solicitor? Who has no audience rights in the Crown Court? He was represented by a privately paid barrister who was funded by one of his support groups.

There won't be many precedents for pigheadedly defying a Court, having already been sentenced for the same offence. Not many that stupid …

If at first you don’t succeed…

How quaint that you are the one to highlight your importance. I accept and understand you do not have an answer to my question. And we all know why. #TommyRobinson https://t.co/fAnkzmaywu

And again, it didn’t go well:

He/she has the answer no don't just not they time to entertain your stupidity.

You probably wouldn't get it if someone drew you a picture.

Tiny Tommy broke the law and now he's in jail. Really is that simple.

If Hopkins genuinely wanted the answers to these questions, she probably would have thought to find them out before appearing on Fox News. Not our Katie, though, as social media users were quick to highlight:

Before issuing the tweet, she did an interview in which she claimed “these are very dark times in the UK”. She further stated:

In order to cleanse voices it doesn’t like, it will put them inside for as long as it needs to to shut them up.

Although it may have helped if she had asked for legal advice before tweeting. Because the Secret Barrister did give her one piece of advice:

Although I will give you this advice for free: What you said on Fox News is in breach of the reporting restriction that was still in place at the time you gave your interview. You are potentially in contempt of court yourself. @attorneygeneral

Have a great evening.

The Canary has left out the links to Hopkins’ Fox appearance for legal reasons.

Just for the avoidance of any doubt, here are some important facts.

Yes, there were temporary restrictions on the reporting of Robinson’s imprisonment. But these were related to the trial he was jeopardising, not his own imprisonment. And as The Canary previously reported:

Hopkins clearly doesn’t know what she’s talking about. But that hasn’t prevented her from spouting off on Fox News and furthering her career through ignorance. That said, however, there is something delicious about watching her get owned on Twitter.