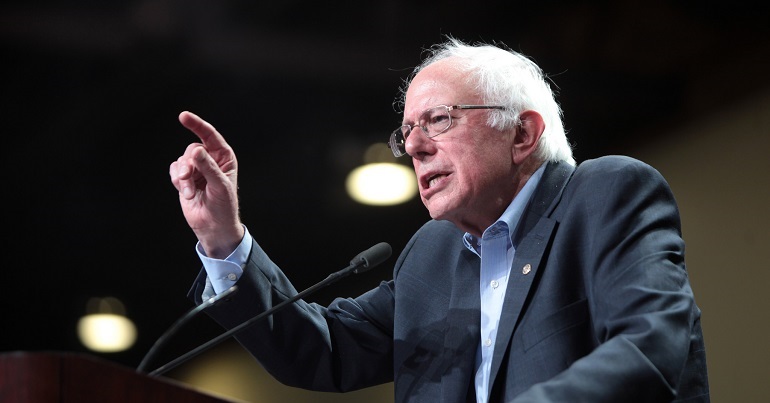 On 1 June, progressive US senator Bernie Sanders appeared in a TV interview. And in it, he nailed what America needs if it’s to deal an electoral defeat to Donald Trump.

Interviewer Bill Maher suggested that the strength of Trump’s support base is partly a result of his clear messaging. And he asked Sanders what message politicians seeking to defeat Trump – the biggest opponents being the Democratic Party – need to be putting out.

we need a government that represents working families – not billionaires;

an agenda that says that healthcare is a right – not a privilege;

an agenda that speaks to the young people and says that we should make public colleges and universities tuition-free, and lower student debt.

Maher also questioned Sanders on why he thought the upcoming midterm elections in the US are ‘the most important election ever’.

this guy looks all over the world and he kind of likes all of these authoritarian leaders. He attacks the media every day, trying to make it harder for them to be critical of him.

And we have a president who is a billionaire himself, who has surrounded himself with billionaires, who gave huge tax breaks to the wealthiest people in this country, and then brings forth a budget that would cut Medicaid by $1tn, Medicare by $500bn, cut nutrition programmes for hungry kids, cut social security, disability…

He also insisted, quite simply:

That’s why he stressed the need for change in the Democratic Party, arguing:

What we need to do is bring forth an agenda that working people all over this country are gonna respond to.

“Take on the people who have power”

Finally, Sanders insisted on uniting the forces which oppose Trump, and on politicians getting involved in local struggles. Highlighting the need for US progressives to “take on the people who have power”, the senator mentioned a couple of the causes he was going to support after the interview. These included Disneyland workers who reportedly struggle to pay for food, rent, and gas (while Disney’s CEO could get a compensation package of around $400m), and Black Lives Matter activists standing up against a jail system that disproportionately imprisons ethnic minority communities in the US.

Democrats lost in 2016. To defeat Trump, they need to learn.

In short, Sanders argued that the Democrats need to increase their connection with working people and set their political agenda accordingly. They must also see healthcare as a right for all citizens, and they must make higher education truly accessible for all young people.

The time for billionaire-based politics is over. And if Trump’s opponents want to deal him an electoral defeat, they need to remember that.

– Check out the 2018 candidates backed by progressive campaigns Our Revolution and Justice Democrats.