A racist woman was recorded abusing a man and his mother. But his response was brilliant. - Canary 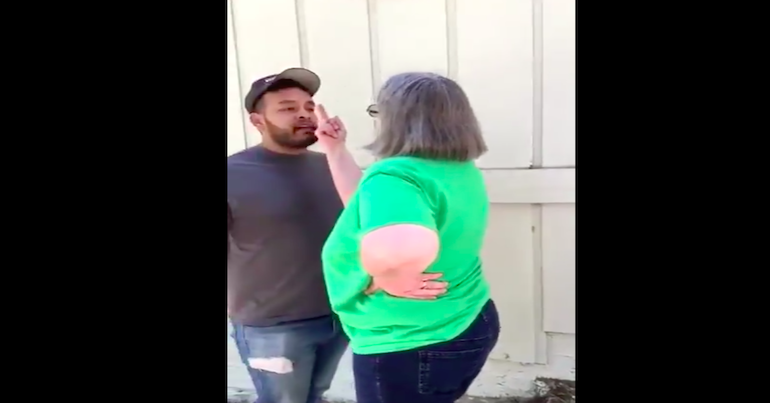 A video of a racist white woman abusing a Hispanic man and his mother while they were doing yard work in the US has gone viral – in part because they didn’t respond in the way she might have expected.

The man in the video is Esteban Guzman – a US citizen of Mexican heritage. But his legal status didn’t stop the unidentified woman from calling him and his mother “rapists”, “drug dealers” and “illegal”.

A friend, Esteban Guzman sent me this video of a racist white woman harassing him while out working with his mom.

"Why do you hate us?"
"Because you're Mexicans."
"We are honest people right here!"
"Haha..yeah.. rapists & animals."

In 2015, Trump said of Mexican immigrants:

The woman in the video also says to Guzman:

Even the president of the United States says you’re a rapist.

There are at least 57.5 million people of Hispanic heritage in the US.

The woman sticks her middle finger in Guzman’s face, before calling him “little boy” and ridiculing his mother for speaking Spanish. But he and his mother remain calm and composed throughout. His mother recorded the exchange.

His message to people who voted for Trump: "We are honest, hardworking, and respectful people. PLEASE WE NEED TO WORK TOGETHER TO STOP RACISM!" No one should be made to feel less than. I am outraged for him. This is not okay 2/2 pic.twitter.com/pns4rkBc2K

The video quickly went viral across social media. On Twitter, it has been retweeted or liked over 130,000 times.

Facebook, meanwhile, briefly took his video down for going ‘against its community standards’. But after complaints, it admitted it had “made a mistake”.

More than she bargained for

In the video, the woman seems to be gunning for a response from Guzman. Even ignoring the language she uses, her body language is aggressive. And with the threat of US police brutality against ethnic minorities, Guzman could understandably fear the worst if she called the police. He and his mother, however, didn’t give the woman what she wanted. Instead, she got a lot more than she bargained for; her face beamed across the globe for everyone to see her for what she really is – a vile, Trump-inspired racist.

– The Canary actively invites its readers to question everything they read. Please follow the hyperlinks we reference. But if you believe in the importance of independent, grassroots media in the fight against corporate propaganda, please consider supporting us.