Department for Work and Pensions (DWP) boss Esther McVey teamed up with the Sun and Jeremy Kyle this week. No, really. She did.

The DWP: in bed with the Sun

The Sun has been rolling its ‘Sunemployment‘ roadshows out across the UK. It hailed them as “giant annual jobs fairs”, featuring over 40 employers and around 35,000 jobs. Considering the right-wing tabloid’s history of demonising people on welfare and its owner Rupert Murdoch’s ultra-capitalist stance, the Sun trying to “get Britain back to work” is unsurprising. Its headlines over the years speak volumes: 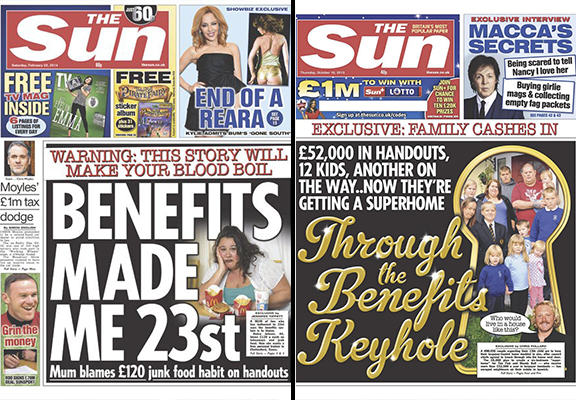 How many people with clear mental health problems, substance misuse issues, or openly intoxicated, has Jeremy Kyle screamed at and ridiculed, and chased [off] stage in floods of tears…? [Kyle] is just a vile public school toff with a hatred of ordinary working class people…

To add insult to injury, the DWP’s McVey also joined in.

On Monday 25 June, work and pensions secretary McVey appeared on the Sun‘s roadshow panel. One Jobcentre Plus Twitter account gleefully announced her appearance:

#JeremyKyle is leading the panel with @EstherMcVey1 at the #SunEmployment jobs fair today at The Oval. Major employers recruiting on the spot such as @TravelodgeUK @WeAreOpenreach @Tesco and many more! pic.twitter.com/bCoUPEGdbV

Then, on Tuesday 26 June, minister for employment Alok Sharma appeared:

This was the day before he faced a grilling from a parliamentary committee into a “devastating” report about Universal Credit.

Also at the roadshow was Charlie Mullins, boss of Pimlico Plumbers:

He appeared days after his firm lost a Supreme Court ruling about its employment of people in so-called ‘gig economy’ conditions; namely that, although Pimlico Plumbers’ workers are self-employed, the firm must give them proper rights.

To top it all off, the government was also fully represented at the Sun roadshow, advertising careers in the armed forces and also pushing apprenticeships.

The fact that the DWP’s boss and the Sun are working together is bad enough. But when the UN has highlighted that both the government and the media have played a part in demonising one group of benefit claimants – disabled people – then it’s even worse.

Last year, the UN said successive UK governments had created a “human catastrophe” for sick and disabled people. It also said they had committed “grave” and “systematic” violations of disabled people’s human rights.

As The Canary previously reported, the UN said that the government and the media “have some responsibility” for society seeing disabled people as “parasites, living on social benefits… and [living on] the taxes of other people”. It said that these “very, very dangerous” attitudes could “lead to violence… and if not, to killings and euthanasia”.

If there was ever an event that summed up the UN’s concerns and the worst of anti-working-class, poverty-shaming Britain, it is the Sunemployment roadshow.